President of CNN Came Out Swinging Against Donald Trump and Sarah Sanders After CNN Received an Explosive Device, and Sanders Just Responded 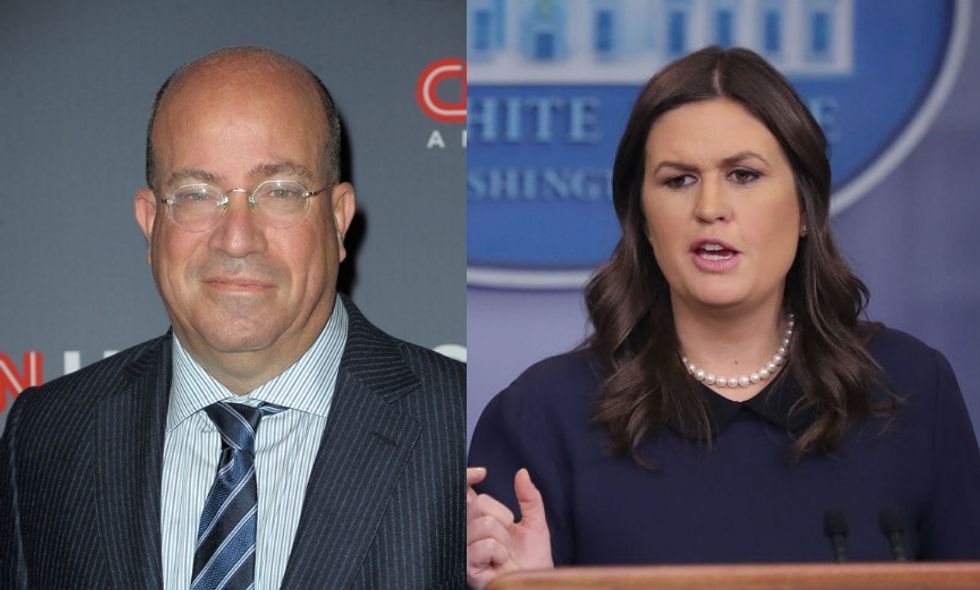 After at least nine homemade pipe bombs were disseminated across the country to President Donald Trump's enemies, CNN President Jeff Zucker took President Donald Trump and White House Press Secretary Sarah Huckabee Sanders to task for their flippant use of demonizing rhetoric against Democrats and CNN itself.

The news network frequently been decried by the president and his supporters, chanting "CNN sucks" at his rallies and ganging up on CNN anchors like Jim Acosta, who was aggressively heckled by Trump supporters at a rally earlier this year. Acosta and other reporters frequently experience derision from the White House and the president himself.

Though Sanders condemned the attacks, she launched right back into the rhetoric that many believe could have played a factor in the attempted attacks.

Zucker's network has taken the brunt of the president's verbal attacks on the so-called "fake news media" since the start of his presidential campaign. He even retweeted a video showing him beating up a body with the CNN logo for a head.

In her loyalty to the president, Huckabee Sanders has often fallen in line to spread harmful rhetoric about those targeted by the pipe bombs.

Now, people are calling her out.

@PressSec @realDonaldTrump You just don't get it do you Sarah? This tweet further shows your total lack of understa… https://t.co/p9i0KvIF6c
— Crystal Grace (@Crystal Grace) 1540471544.0

@PressSec @realDonaldTrump He blamed CNN and the mainstream media for these bombs. He did it last night and this mo… https://t.co/ZPC9ZIplHA
— Brickhouse (@Brickhouse) 1540468991.0

@PressSec @realDonaldTrump This is a very dangerous game you and your administration are playing. If one of these e… https://t.co/JGhC0SP7xg
— ALTreclaimedhome (@ALTreclaimedhome) 1540470193.0

Sanders has frequently used the press secretary's podium as a bullying pulpit, attacking democrats, journalists, and anyone else who dares to call out the president's actions.When CNN's Jim Acosta (a favorite target of the Trump administration) asked Sanders about the morality of separating children from their mothers, Sanders belittled him:

"I know it’s hard for you to understand even short sentences, I guess, but please don’t take my words out of context."

To many supporters of the president, Acosta has become the face of what they perceive to be fake liberal propaganda. During the president's visit to the United Kingdom earlier this year, he refused to take a question from Acosta.

He was also heckled by Trump supporters with chance of "CNN sucks" while covering one of the president's rallies.

The events echo a larger trend of Trump supporters showing aggression toward mainstream news outlets at the president's bidding. After the president called the press "the enemy of the people," Sarah Huckabee Sanders refused to say that the statement vilifying the necessity of a free press was wrong.

When Sanders was quietly denied service at The Red Hen Restaurant earlier this year, she tweeted about the encounter, bringing harassment and criticism from the right to the small business.

It was instances like these that led Sanders to criticize Democrats for their so-called lack of civility and later, characterizing them as an angry mob, but it appears that over a year and a half of hateful rhetoric mixed with propaganda spouted from her podium has some Trump supporters ready to believe that the bombs were a hoax by the Democrats.

It's clear that the rhetoric coming from the White House is affecting the minds if not the actions of Americans everywhere. As Zucker said, maybe it's time the White House takes that stature more seriously.