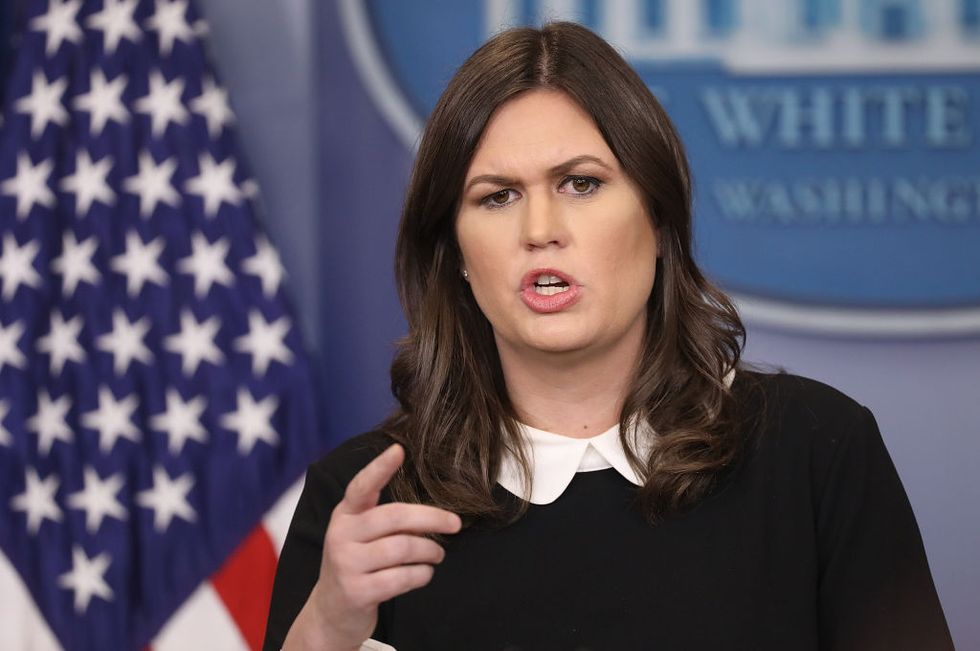 "The lawyer for the solicitor general's office for the administration said today in the Supreme Court if it would be legal, possible for a baker to put a sign in his window saying we don't bake cakes for gay weddings," The New York Times's Michael Shear asked. "Does the president agree that that would be ok?"

"The president certainly supports religious liberty and that's something he talked about during the campaign and has upheld since taking office," Sanders replied.

When pressed on whether that included support for signs that deny service to gay people, Sanders responded: "I believe that would include that."

In the Masterpiece Cakeshop case, cakeshop owner Jack Philips's refused to bake a wedding cake for gay couple David Mullins and Charlie Craig for their 2012 wedding celebration in Colorado, after they had been married in Massachusetts. Philips argued before the Supreme Court this week that his religion, specifically his Christian belief against same-sex marriage, allows him to refuse service to gay people.

Phillips added during his argument that he was willing to sell the couple other goods, just not a custom wedding cake.

The wedding cake issue became a legal one, progressing to the Colorado courts and now to yesterday's hearing at the United States Supreme Court, after the Colorado Civil Rights Commission found the baker in violation of the state's anti-discrimination law.

It is well known that President Trump's administration is not an ally of the LGBT community. Back in July, Trump announced his currently-thwarted attempt to ban transgender individuals from serving in the military, and shortly after Jeff Sessions of the Department of Justice argued in an amicus brief that the landmark Civil Rights Act of 1964 does not protect LGBTQ workers from discrimination based on sexual orientation.

So it is no surprise that the Trump administration filed a "friend of the court" brief this past July on Phillips's behalf. Then during oral arguments on Tuesday, the president's solicitor general, Noel Francisco, told the Supreme Court that businesses should be able to hang a sign in their windows that announces they won't serve LGBT customers.

Justice Anthony Kennedy asked Francisco if bakers like Philips could have a sign in their windows that say, "We don't bake cakes for gay weddings." Francisco said yes, bakers could refuse such a service so long as the cakes are custom made. He argued that Phillips's artistic expression in designing the cake would be covered under the First Amendment. The irony of his statement is that President Trump regularly attacks the freedom of speech inherent in the First Amendment.

Justice Sonia Sotomayor responded by bringing up discriminatory treatment against LGBT people, saying that denying service to people because of their race, gender or religion is illegal and also applies to sexual orientation.

And the American Civil Liberties Union (ACLU), which argued in favor of the same-sex couple, wrote in court briefs that seeking a constitutional right to “hang a sign in its shop window proclaiming, ‘Wedding Cakes for Heterosexuals Only’” is a violation of the rights of LGBT Americans.

“The question, rather, is whether the Constitution grants businesses open to the public the right to violate laws against discrimination in the commercial marketplace if the business happens to sell an artistic product,” the ACLU said, noting that the answer is simply no.

A ruling in the case is expected by the summer, and Kennedy will likely be the deciding vote.