Sarah Sanders Just Tweeted Goodbye to the White House on Her Last Day, and Twitter Had Some Goodbyes of Their Own 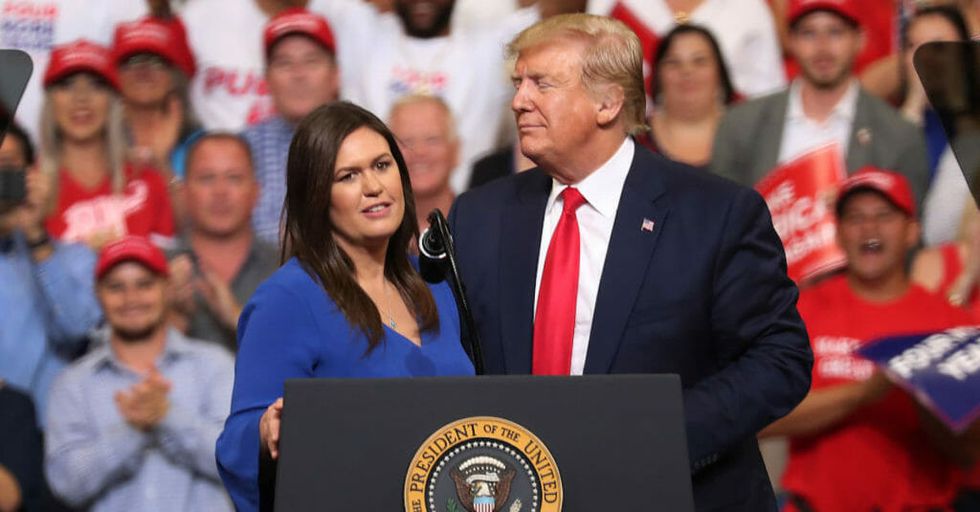 President Donald Trump stands with Sarah Huckabee Sanders, who announced that she is stepping down as the White House press secretary, at the Amway Center on June 18, 2019 in Orlando, Florida. (Photo by Joe Raedle/Getty Images)

"Today I’ll walk out the gates of the White House for the last time as Press Secretary with my head held high. It’s been the honor and privilege of a lifetime to work with President [Donald Trump] and his amazing team the last three and a half years. You’re the best...Thank you!"

Today I’ll walk out the gates of the White House for the last time as Press Secretary with my head held high. It’s… https://t.co/cXVJo5oHWQ
— Stephanie Grisham (@Stephanie Grisham) 1561733093.0

Sanders repeated President Donald Trump's claim that she held the position for 3 1/2 years, but Sanders became Press Secretary in July 26, 2017, making her tenure a month shy of two years.

I am blessed and forever grateful to @realDonaldTrump for the opportunity to serve and proud of everything he’s acc… https://t.co/TEdioI6B5r
— Stephanie Grisham (@Stephanie Grisham) 1560460329.0

Neither explained why they keep referring to 3 1/2 years as press secretary, but Sanders did work on Trump's 2016 campaign.

Sanders' goodbye received a less than fond farewell. Many replied directly to Sanders.

@PressSec @realDonaldTrump You should slither out with your head held low in shame.
— Cheri Jacobus (@Cheri Jacobus) 1561733679.0

People wondered what life after the White House would be like for Sanders.

We should make it impossible for Sarah Sanders (or anyone who has ever worked in service of the Trump administratio… https://t.co/UQYghpCeeO
— Lauren Duca (@Lauren Duca) 1561749444.0

@PressSec @realDonaldTrump May you be heckled at every restaurant you try to dine at, and publicly called out as th… https://t.co/zpN96QbVcf
— RebelCo (@RebelCo) 1561755365.0

Some did say goodbye however.

Huckabee Sanders exact plans for the future were not announced, however many speculate she may run for governor in Arkansas. President Trump brought her onstage during his 2020 presidential campaign kickoff MAGA rally in Orlando. His official announcement of Sanders leaving the White House also referenced her being the governor of Arkansas.

One person did offer Sanders a parting gift however, something to remember her time in Washington DC.

White House correspondent April Ryan wrote about working at the White House with the Trump administration. Her book Under Fire: Reporting from the Front Lines of the Trump White House is available here.