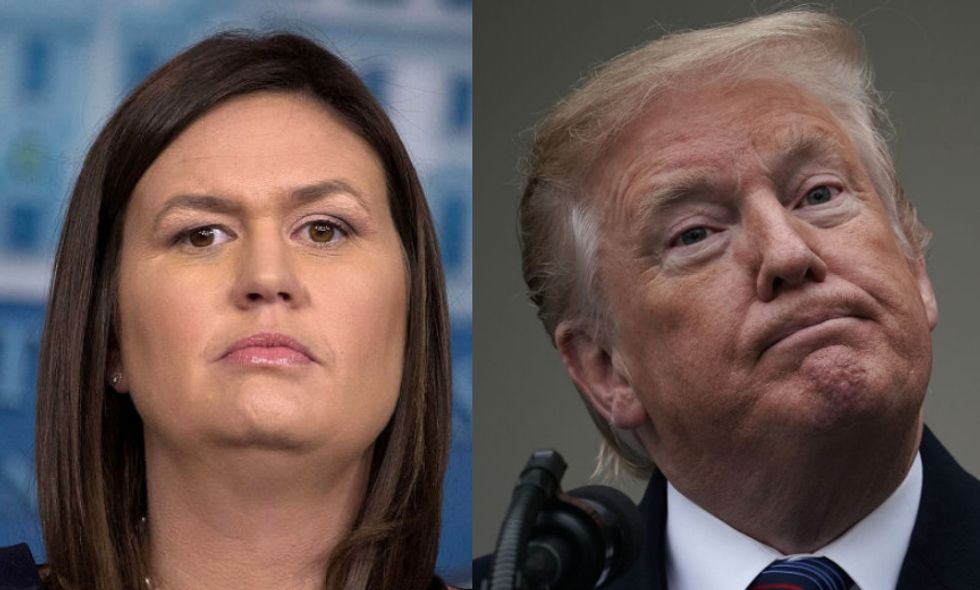 President Donald Trump is facing enhanced public scrutiny after reports that the FBI opened an investigation into whether the President was secretly working for Russia.

The news broke roughly around the same time that stories were published of Trump's effort to conceal conversations with Russian President Vladimir Putin from his own staff.

The President was unsurprisingly enraged by the news, taking to Twitter to disparage former FBI agents.

Wow, just learned in the Failing New York Times that the corrupt former leaders of the FBI, almost all fired or for… https://t.co/w6DbjxRfnC
— Donald J. Trump (@Donald J. Trump) 1547294736.0

Then after Special Counsel Robert Mueller, his investigation, and—naturally—Hillary Clinton.

It's more than likely that White House Press Secretary Sarah Huckabee Sanders will soon emerge to defend the President's erratic tweet storm while assuring the public of his total innocence.

But if she's going by her 2016 standards, that would be a different story.

And the public isn't about to let her forget this tweet.

Because Trump attacks the FBI on a regular basis, Sanders' words have generated a wealth of replies.

@SarahHuckabee #POTUSisaRussianAsset and you willingly work for him. Let me know when the @FBI stops by your house with a #warrant!
— Andres Diaz🇵🇷 (@Andres Diaz🇵🇷) 1547311496.0

But there was something more insidious behind the jokes about how well the tweet has aged.

Many noted Sanders' entrenchment in the President's falsehoods, decrying her for disseminating propaganda in his favor, sowing misinformation and worsening discord.

@SarahHuckabee "I watch your face contort with the unmistakable tells of a person who doesn't believe a word they'r… https://t.co/GEm5eMw73S
— John Pavlovitz (@John Pavlovitz) 1547263253.0

@SarahHuckabee Thanks Sarah. History will never forget your duplicitousness in the face of the degradation of our political institutions.
— Ron Idoko (@Ron Idoko) 1547335370.0

@SarahHuckabee Narrator: “It’s now January 2019, the Trump administration has backed itself into a corner with a mi… https://t.co/1D8G5azFZt
— ThinkThinkAboutIt (@ThinkThinkAboutIt) 1547339824.0

There have been rumors that Sanders will soon leave the administration after finally becoming too exasperated to keep covering for the President.

@SarahHuckabee Remember this post Sarah? You should jump ship while you can, don't be that orchestra to go down wit… https://t.co/qssfpp5XoY
— Ryan Brooks (@Ryan Brooks) 1547335481.0

Nevertheless, Sanders remains steadfast in her loyalty to the President and, according to many Americans watching with disgust, will flip on any previously held ideological or moral position to stay in Trump's good graces—including the position expressed this tweet.