Sarah Sanders Is Getting Dragged for Saying Donald Trump's Inaugural Has Nothing to Do With Him, and Now She Has a New Talking Point 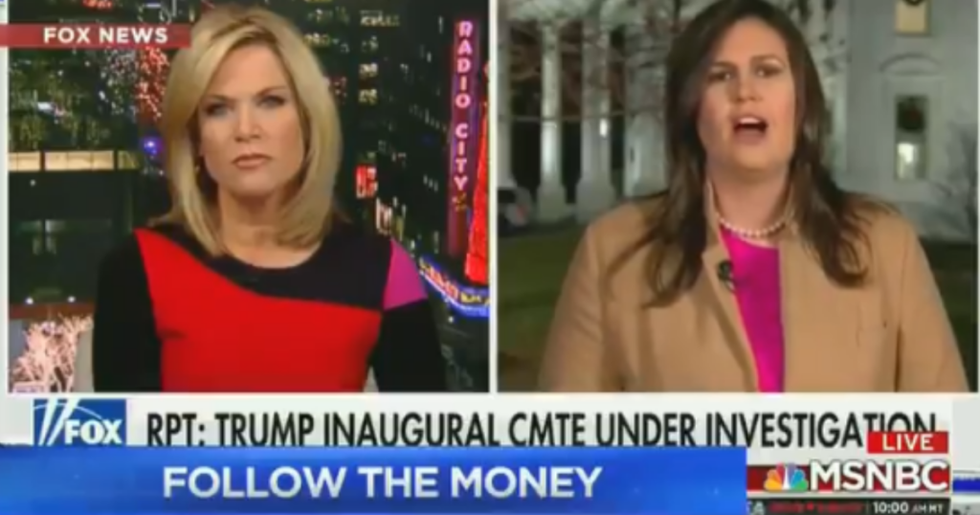 White House Press Secretary Sarah Huckabee Sanders is getting dragged for her defense of President Donald Trump's inaugural committee, which is under federal criminal investigation.

The Wall Street Journal reported on Thursday that Trump's inaugural committee, a non-profit, was being probed by New York prosecutors for possible illegal foreign contributions. Some of these donations may have been to sway favor with the new administration, investigators say.

The committee raised more than $100 million in the weeks leading up to Trump taking the oath of office. The investigation "partly arises out of materials seized in the federal probe of former Trump lawyer Michael Cohen's business dealings," the WSJ said.

Sanders on Thursday tried to distance the president from the committee and foreign donations made to a pro-Trump PAC.

To do so, Sanders relied on the same tactic that she and other Trump mouthpieces have employed for years: repeat the spin until people believe it.

.@PressSec on Trump's inaugural committee being under criminal investigation: "That doesn't have anything to do w/P… https://t.co/DzRxZIt7X0
— Aaron Rupar (@Aaron Rupar) 1544796542.0

“On the inaugural committee: that doesn't have anything to do with the President or First Lady,” Sanders told reporters. “The President was focused on the transition during that time and not on any of the planning for the inaugural.”

In an appearance on Fox News, Sanders again suggested that Trump had nothing to do with his own inauguration.

"That doesn't have anything to do with the President," Sanders said. "The biggest thing the president did in his engagement w/the inauguration was to come here, raise his hand & take the oath of office."

One more time for the people in the back:

Sarah Sanders claims that Trump had nothing to do with his own inauguration. https://t.co/wiIiueAioL
— PoliticusUSA (@PoliticusUSA) 1544810028.0

In repeating the same talking point—that the President's only role was to show up and raise his hand—many thought Sanders was raising a finger to Americans.

Norm Eisen, President Barack Obama's ethics czar, tore into Sanders on Twitter for her latest round of gaslighting.

"It’s HIS inauguration," Eisen wrote. "When your name is plastered in large type at the top of every single event invitation, you don’t get to say “I was too busy to oversee my own activities. Besides, we know it’s probably a lie & opposite will come out on [sic] 2 weeks."

The lengths Trump's henchpeople go to assign blame is remarkable.

@politicususa Hasn't that been Trump's excuse for his serial infidelity? That he really had nothing to do with his own marriages?
— Steve F. (@Steve F.) 1544816616.0

@NormEisen The WH has a credibility problem. I don’t believe anything they say.
— Kristen Steffen (@Kristen Steffen) 1544790062.0

@NormEisen So the defense here is: The Trump Administration doesn’t have anything to do with Trump. [Don’t try th… https://t.co/oOhAPxAsOm
— James Howard (@James Howard) 1544802844.0

Sanders, who earlier this week said she wanted her legacy to be one of "transparency and honesty," is not living up to that standard.

@atrupar @PressSec Not a good contribution for all that transparency and honesty she is hoping survives her tenure at the WH
— Then I Thought (@Then I Thought) 1544796731.0

@atrupar @PressSec She wants her legacy to be one of truth telling? Her name is already a synonym for “lies.” #TickTock
— Steverino (@Steverino) 1544796840.0

@atrupar @PressSec What if every member of the press just started laughing at her every time one of these absurdities came out of her mouth?
— Eryn Young (@Eryn Young) 1544798915.0

Remember that Trump was utterly obsessed with the size of his inauguration crowd.

“The president had one particular story on his mind: a panel discussion comparing the Trump inauguration to that of President Obama’s first inaugural,” former Press Secretary Sean Spicer wrote in his book, The Briefing. "They were saying that the Trump crowd was noticeably sparse by comparison. The president was clear: This needed to be addressed—now.”

Trump's inaugural committee denies any wrongdoing and that it was "in full compliance with all applicable laws."

"The (committee) is not aware of any pending investigations and has not been contacted by any prosecutors. We simply have no evidence the investigation exists," the statement read.

"The (committee's) finances were fully audited internally and independently and are fully accounted. Moreover, the inauguration's accounting was provided both to the Federal Election Commission and the IRS in compliance with all laws and regulations. These were funds raised from private individuals and were then spent in accordance with the law and the expectations of the donors. The names of donors were provided to the FEC and have been public for nearly two years and those donors were vetted in accordance with the law and no improprieties have been found regardng the vetting of those donors."