Sarah Palin Came for Stacey Abrams on Twitter After She Was Chosen to Give the Democratic State of the Union Response, Regretted It Immediately 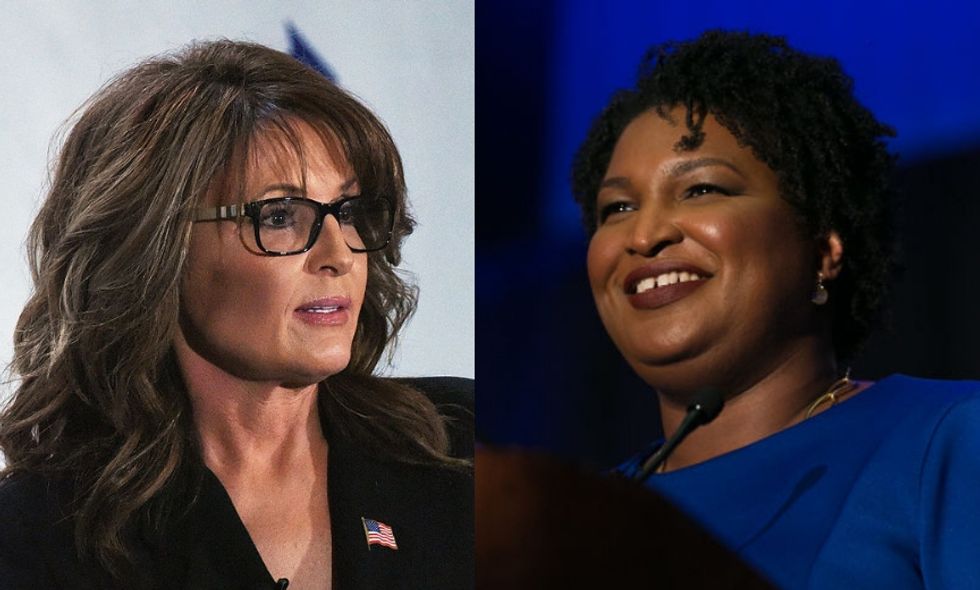 Stacey Abrams ran for Governor of Georgia last year during midterm elections, but her ideas and campaign stances held the attention of millions outside the state lines.

That's why Americans across the country were thrilled when Senate Minority Leader Chuck Schumer (D-NY) announced that Abrams would be delivering the official rebuttal to President Donald Trump's State of the Union on February 5.

Though Abrams lost her election by 1.2 percentage points (largely due to voting policies in the state designed to benefit the GOP), she's retained the national attention brought on by her campaign.

But though Abrams is adored by Democrats, Republicans critical of her delivering the State of the Union response spoke out as well.

Palin shared an article from a far-right Republican blog calling Abrams a "LITERAL LOSER." The irony seemed to be lost on the Vice Presidential nominee, who with the late Senator John McCain (R-AZ), lost her presidential bid in 2008 to a much wider margin.

Since the 2008 election, Palin has become more and more of a fringe politician, however she's still fiercely popular with the Tea Party (her rhetoric during the 2008 campaign helped mobilize the then-burgeoning GOP subset) as well as many on the alt-right.

However, in the political mainstream, she's regarded as little more than a GOP pundit, which may be why her tweet instantly began getting backlash.

@SarahPalinUSA Gov. Palin I just wanted to congratulate you on finishing this tweet.
— IWantNothingHat (@IWantNothingHat) 1548805286.0

They even reminded Palin of some of her statements from 2008.

Among these: "I can see Russia from my house."

@SarahPalinUSA I could see your desperate attempt at relevance from my house.
— Matt Dominick (@Matt Dominick) 1548856045.0

While Abrams narrowly lost the gubernatorial election in Georgia, it seems like Palin would fare even worse in a Senate election in her home state. She previously hinted at a run for Senator Lisa Murkowski's (R-AK) seat in 2022.

@SarahPalinUSA @lisamurkowski Lol remember when you were governor of Alaska and you quit to try make the big bucks… https://t.co/cRK5UIlPDT
— Molly Knight (@Molly Knight) 1538785454.0

@SarahPalinUSA @lisamurkowski I can see you and that president and his family packing, from my house. bye!
— Martha (@Martha) 1538875902.0

Sarah Palin will have plenty of time to reflect on what makes a literal loser on February 5, while the nation's eyes are on Abrams.