Anti-Trump Republican Congressman Claims His Farewell Facebook Post Didn't Liken Donald Trump With Hitler, But He Kind of Did 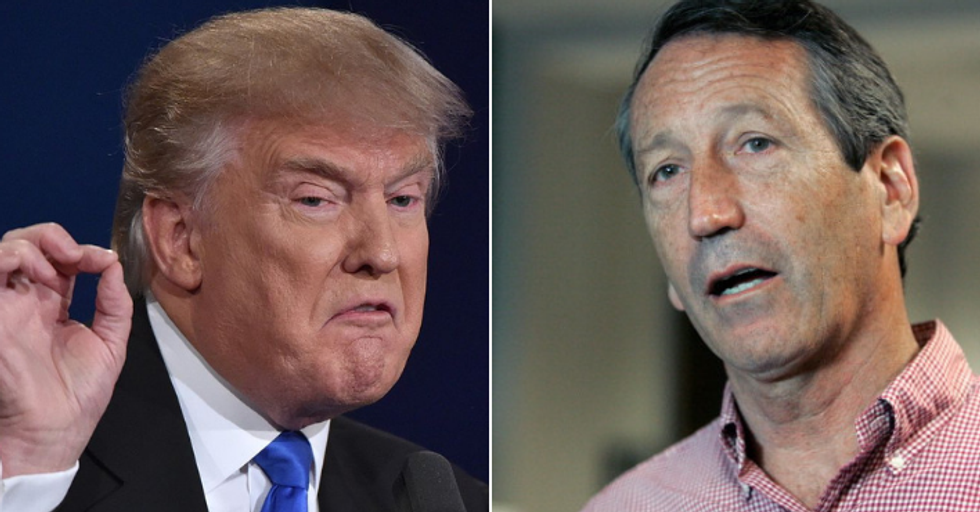 Sanford felt a President who made promises should keep them. Like releasing tax returns after claiming "if elected" you would do so.

Sanford's critiques cost him his place in the South Carolina GOP primary leading up to the 2018 midterms. But the short-sightedness of replacing a more moderate Republican with a Trump acolyte failed to account for the need to get people outside the GOP to vote for the person in the general election.

Sanford's seat was one of 40 flipped from Red to Blue in the 2018 midterms. Had Sanford retained his party's support in the primary, his district might still be red.

But he didn't and it isn't. Democrat Joe Cunningham is headed to Washington DC in January for South Carolina's 1st congressional district.

In his farewell to his constituents—who he represented since 1995 in Congress with a short break and stint as Governor thrown in and despite his own scandals—Sanford warned of being lured by a "cult of personality."

In the realm of political science, "cult of personality" is defined as:

"...when a country's regime—or an individual—uses the techniques of mass media, propaganda, the big lie, spectacle, the arts, patriotism, and government-organized demonstrations and rallies to create an idealized, heroic, and worshipful image of a leader, often through unquestioning flattery and praise. It is often seen in totalitarian or authoritarian countries."

Sanford—in a Facebook post—shared what would have been his farewell address from the floor of the House of Representatives except—as he phrased it—"last week was chaotic and the time that I have reserved on the floor got washed out with all the upheaval that Thursday delivered in Washington."

"Take a look below, and know that it has but two main messages:"

"One, thank you for your part in allowing my time in the arena of politics. It’s been an honor, and I am most appreciative."

"Two, we are headed for a shipwreck if we don’t change course. I walk through some of the ingredients of what we need to be careful about in the pages below, but the main point here is what we all know in the way in which Washington cannot continue to do business as it now does and have our republic survive."

His lengthy post began with words of thanks for the many mentors, workers and family members who supported him. From there, Sanford's post continued with what can only be described as an indictment of the Trump administration.

He began the last portion of his post with:

"...and finally, I ask you to remember the power of ideas - and how they can change the world. We are living in a weird time on this front right now. It’s important that we go back to our roots as a reason-based republic. We seem to flirt with populism about every hundred years in this country, and it seems we are in our latest courtship given the era of Trump."

"But a cult of personality is never what our Founding Fathers intended. We in fact were to be a nation of laws and not men. Over my 25 years, I have come to revere what the Founding Fathers created here - along with the traditions and institutions that they established in support of this simple but sacred idea of being about laws and ideas rather than a nation subject to the whims of men."

"I believe that we are marching our way toward the most predictable financial and economic crisis in the history of our republic. If we don’t change course soon, markets will do it for us, and the consequences will be damning with regard to future inflation, the value of the dollar, the worth of our savings, and ultimately our way of life."

Referring to a book by Friedrich Hayek The Road to Serfdom, Sanford stated:

"...as open political systems become cumbersome and inefficient, inevitably a strong man comes along and offers easy promises. He says that he can take care of it for us."

"People desperate for a change accept his offer. They have to give up a few freedoms in the equation to get more security. It doesn’t work out so well, as Hayek’s book in this instance is about the rise of Hitler in post-WWI German history."

"I want to be clear and explicit that I am not likening Trump to Hitler, but the forces at play could lead to a future Hitler-like character if we don’t watch out."

"It must be remembered that another thing that Benjamin Franklin said was that he who trades his freedom for security, deserves neither. Indeed, how true."

Sanford also tackled the unprecedented level of lies and misinformation from President Trump and members of his administration. He stated:

"...We must embrace the truth, and it will set us free. Open political systems cannot survive in a post-truth world. While none of us are perfect, and there will always be grey around some areas of truth, we cannot accept chronic streams of distruth [sic]."

"If everything is subjective, there is nothing to debate. If, on the other hand, there is objective truth, and I can approach it from the right while you approach it from a perspective more to the left, then we can join in debate."

"Without truth out in the middle, there is no starting point and the reasoned debate that an open political system relies on for its survival is strangled and dissipates."

Then Sanford addressed Trump's attacks against the First Amendment and freedom of the press. He added:

"A corollary to this is that we can’t accept the idea of 'fake news'."

"In the former Soviet Union, they have truly fake news, and attempts to equate what’s happening here with what happened there is most dangerous."

"There is a reason that the Founding Fathers enshrined the idea of a free and open press in the First Amendment. We should watch this carefully as the populist waves of today now come ashore."