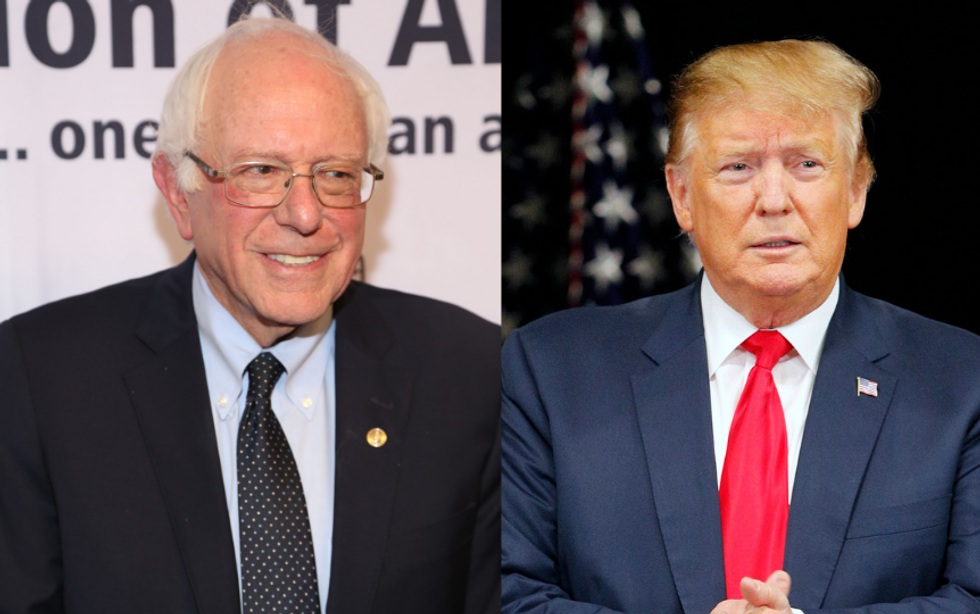 Bernie Sanders has campaigned long and hard for incarcerated criminals to have the right to vote. Sanders took a tongue-in-cheek shot at Trump in his latest op-ed, saying that even felons like Paul Manafort and Michael Cohen deserve the right to vote.

Sanders has come under fire recently for his comments advocating voting rights for the incarcerated. He believes that every American over the age of 18 deserves the right to help shape our democracy - and that includes incarcerated felons.

Many other Democrats support a much less controversial policy. Presidential candidate Beto O'Rourke and former San Antonio Mayor Julián Castro have both suggested that they would support voting rights for non-violent offenders, but that criminals like the Boston Marathon Bomber should not be eligible.

But Sanders believes that "[...] the right to vote is inherent to our democracy. Yes, even for terrible people." Even if those terrible people include felons like Paul Manafort and Michael Cohen, two of Trump's cronies who have recently been convicted of crimes.

In a USA Today op-ed, Sanders doubled-down on his proposed policy changes. "If we are serious about calling ourselves a democracy, we must firmly establish that the right to vote is an inalienable and universal principle that applies to all American citizens 18 years and older. Period."

"Even if Trump’s former campaign manager and personal lawyer end up in jail," Sanders added, in a jab at the current administration's legal troubles, "they should still be able to vote — regardless of who they cast their vote for."

Many Twitter users did not agree with Sanders' controversial views on inmate voting.

@USATODAY @BernieSanders @usatodayopinion If committing a serious crime shouldn’t, then what on earth should?
— RealFurgas (@RealFurgas) 1556642994.0

@USATODAY @BernieSanders @usatodayopinion The murderers lost their rights to citizenry when they took away other pe… https://t.co/EyNMhhmcZr
— Mary-Ann Hornbaker (@Mary-Ann Hornbaker) 1556642966.0

"It goes without saying that someone who commits a serious crime must pay his or her debt to society," Sanders said. "But punishment for a crime, or keeping dangerous people behind bars, does not cause people to lose their rights to citizenship. It should not cause them to lose their right to vote."

@10foothotdog @BernieSanders @shaunking In other words someone who is black and got 5 years for smoking pot is not… https://t.co/y6c2cIyHQi
— Jason Zane Smith (@Jason Zane Smith) 1556332095.0

"Our present-day crisis of mass incarceration," Sanders said, "has become a tool of voter suppression."

Sanders pointed out that states such as Vermont and Maine already allow inmates to vote. "This is not a radical idea," he said. "Voting rights for all citizens is a basic principle of democracy."

"I have been attacked in recent days by President Trump and others for my conviction that people who are incarcerated should be given the right to vote," said Sanders. "I make no apologies for that position."

Michael Cohen and Paul Manafort should thank him.