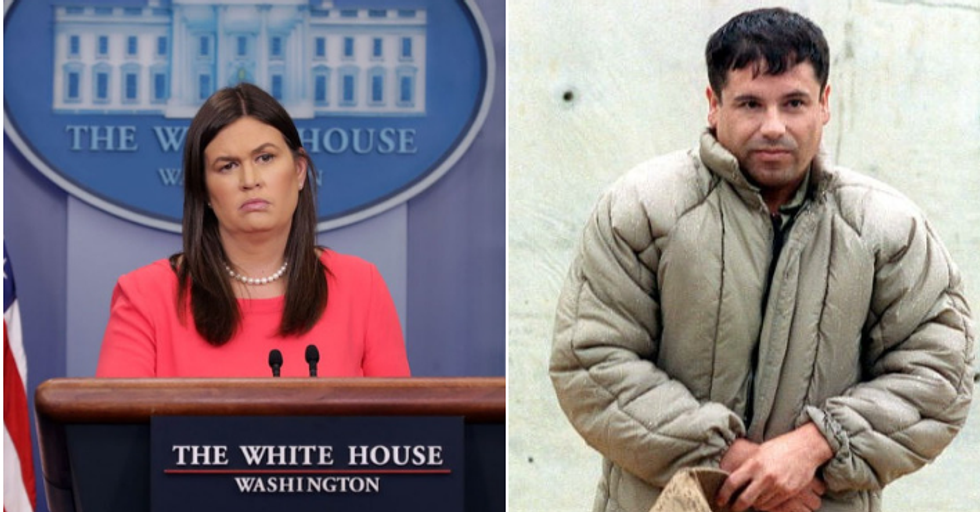 The Trump administration has been all hands on deck to push his border wall. From the Department of Homeland Security Secretary Nielsen dropping articles in memos and speech to say "From Congress I would ask for wall, we need wall" to making false claims in press conferences and tweets.

"El Chapo’s reign of terror is over. He‘ll spend the rest of his life in a maximum security prison. The threat from violent drug cartels is real - we must secure our border"

El Chapo’s reign of terror is over. He‘ll spend the rest of his life in a maximum security prison. The threat from… https://t.co/BtOtOcNmZ9
— Stephanie Grisham (@Stephanie Grisham) 1550026357.0

It's no secret that President Donald Trump thinks a big multi-billion dollar wall/fence—with his name on it—will end all drug smuggling and human trafficking. He and other members of the Trump administration made that claim over and over.

But while invoking the name of El Chapo as the boogeyman who the wall will stop, some important facts are forgotten. Facts that border security experts pointed out the first time Trump decided to make wall building—paid for by Mexico—a focal point of his 2016 presidential campaign.

The primary means of smuggling drugs and people into the United States is with modern transportation through legal ports of entry, not walking across the southern border. During El Chapo's trial, members of his cartel testified all the ways drugs were smuggled that Trump's border wall would be completely ineffective against.

As with the other times Trump administration officials obfuscated to attempt to bolster support for Trump's border wall, people were ready to enlighten Sanders on her misunderstanding of El Chapo's drug trafficking operation.

@PressSec FYI @PressSec he never once tried to drive any drugs around or through a fence.
— #iamdevinscow (@#iamdevinscow) 1550029906.0

@PressSec You do understand his drug transport was light years beyond walls...never mind. You lie for a living. #noconscience
— Jay Brightman (@Jay Brightman) 1550027048.0

While others asked Sanders to explain what she thought a wall would contribute.

El Chapo was arrested in Mexico by Mexican authorities. His capture and the dismantling of his empire was done through cooperation with the Mexican government, not by hurling insults across a wall.

@PressSec LOL, he was arrested IN MEXICO and OUR LAW ENFORCEMENT brought him to the US. What would a wall have done?
— David Pakman (@David Pakman) 1550028467.0

While others suggested a different announcement they'd like to see coming from the White House.

@PressSec Now if we could only end the reign of terror of the American President—That would make America REALLY GREAT!
— JenifferG (@JenifferG) 1550027599.0

And some commented on Sanders long silences now that she no longer holds press briefings...

...or made other statements about Sanders.

Trump asked for 23 billion then over 5 billion and now over 1 billion for a wall that Republican Representative Will Hurd called "the most expensive and least effective" form of border security. Texas GOP's Hurd is the only Republican member of the House to represent a district along the Mexican border.

His voice joins security experts in stating funds for Trump's pet project would be better spent on upgrading technology and increasing security at legal points of entry.