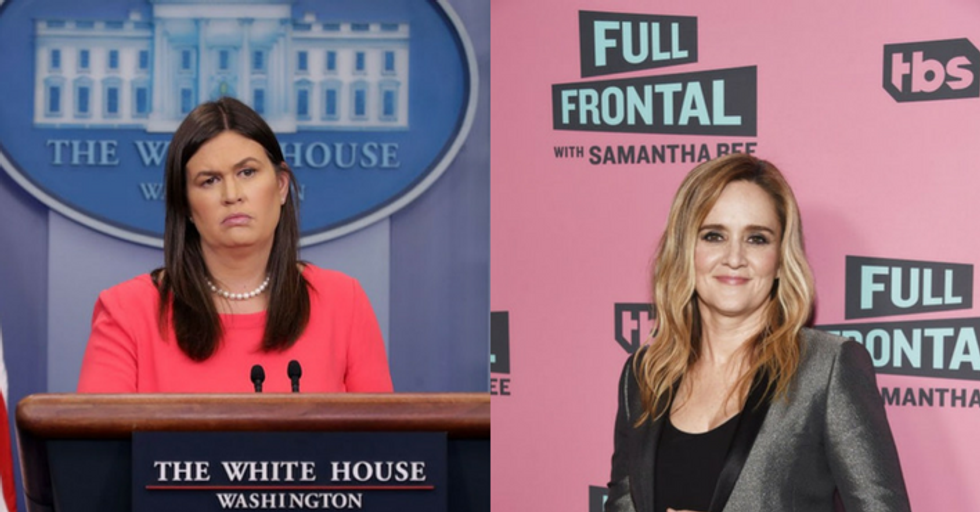 The language used by Samantha Bee last night is vile and vicious. The collective silence by the left and its media allies is appalling."

"[Bee’s] disgusting comments and show are not fit for broadcast, and executives at Time Warner and TBS must demonstrate that such explicit profanity about female members of this administration will not be condoned on its network."

The Full Frontal segment focused on President Donald Trump's immigration policy to separate migrant children from their parents. Bee took exception to Ivanka Trump's post of herself and her own small child on Twitter while the country was focused on the new policy.

"You know, Ivanka," Bee began after calling Ivanka's post the "second most oblivious tweet we've seen this week," added, "that’s a beautiful photo of you and your child, but let me just say, one mother to another: Do something about your dad’s immigration practices, you feckless c---."

Bee apologized in a statement on Thursday afternoon.

I would like to sincerely apologize to Ivanka Trump and to my viewers for using an expletive on my show to describe her last night. It was inappropriate and inexcusable. I crossed a line, and I deeply regret it."

I would like to sincerely apologize to Ivanka Trump and to my viewers for using an expletive on my show to describe… https://t.co/bwphm63ZAb
— Samantha Bee (@Samantha Bee) 1527790590.0

Bee's profanity laced monologue came just one day after ABC announced it would be cancelling a reboot of the 1980s sitcom Roseanne due to Twitter posts by the show's star, Roseanne Barr. The actress is a vocal Trump supporter and had a history of posting conspiracy theories and bigoted memes and rhetoric on Twitter.

Since then, right wing pundits and conservative social media circles have tried to find a left wing equivalent. After suggesting Bill Maher, who holds no exalted place among progressives, failed to gain sufficient traction, Bee's on air address came just when it was needed most.

Megyn Kelly and other conservatives quickly took to social media to post a 'whataboutism'.

This is disgusting. How is this acceptable? And how are we expected to take any of these publications seriously if… https://t.co/fKm8bcIh60
— Megyn Kelly (@Megyn Kelly) 1527768591.0

If Samantha Bee was a conservative and said her despicable comment about Obama’s daughter, her life would be over,… https://t.co/7sBdvAIwpf
— Charlie Kirk (@Charlie Kirk) 1527797751.0

But not everyone is on board with their assessment of what did or should happen.

I like Samantha Bee a lot, but she is flat wrong to call Ivanka a cunt. Cunts are powerful, beautiful, nurturing and honest.
— Sally Field (@Sally Field) 1527793535.0

If Samantha Bee should immediately be barred from TV for on one occasion using the c-word to describe another woman… https://t.co/mDyGbYV1bQ
— Seth Abramson (@Seth Abramson) 1527790652.0

Sleeping Giants, a "campaign to make bigotry and sexism less profitable," broke down their take on the situation.

All told, we have had three major actions on here, all with ample evidence that a site or person has had considerab… https://t.co/lD2E6OA16E
— Sleeping Giants (@Sleeping Giants) 1527799253.0