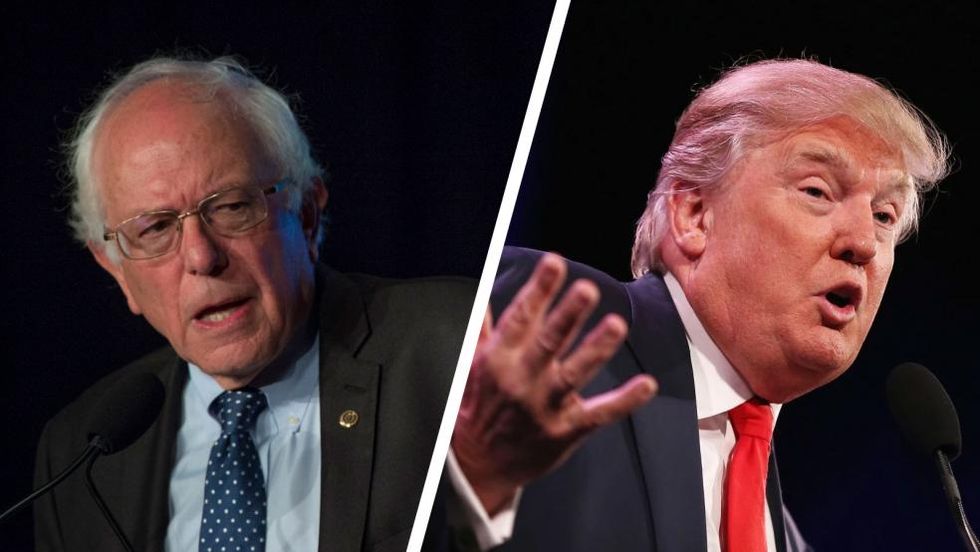 Donald Trump accepted the Republican presidential nomination at the close of the Republican National Convention Thursday night, and his incendiary politics provided Vermont Sen. Bernie Sanders all the ammunition he needed to lambast Trump, who, he asserts, "has made bigotry and divisiveness the cornerstone of his campaign."

Sanders, who recently endorsed presumptive Democratic presidential nominee Hillary Clinton, railed into the real estate mogul on Twitter using the hashtag #RNCwithBernie as he watched the proceedings on television from his home in Vermont.

From the start, Sanders did not mince words.

Those who voted for me will not support Trump who has made bigotry and divisiveness the cornerstone of his campaign. #RNCwithBernie
— Bernie Sanders (@Bernie Sanders) 1469154536.0

Nor did Sanders allow Trump's denunciation of "15 years of wars in the Middle East" to slip by. Trump sparked more controversy this week after he said he would limit American intervention in global crises. When asked whether he would defend American allies in NATO and East Asia, Trump cast doubt as to how seriously he takes the United States' NATO treaty commitments. “If we are not going to be reasonably reimbursed for the tremendous cost of protecting these massive nations with tremendous wealth … then yes, I would be absolutely prepared to tell those countries, ‘Congratulations, you will be defending yourself,’” Trump said.

Trump is wrong. The real cause of instability in the Middle East was the Bush-Cheney invasion of Iraq. By the way, where is President Bush?
— Bernie Sanders (@Bernie Sanders) 1469154882.0

What a hypocrite! If Trump wants to "fix" trade he can start by making his products in the US, not low-wage countries abroad. #RNCwithBernie
— Bernie Sanders (@Bernie Sanders) 1469155326.0

He also criticized Trump for what he didn't say.

Still waiting for a single word about covering the 28 million Americans without health insurance. I guess they don’t matter much to Trump.
— Bernie Sanders (@Bernie Sanders) 1469155613.0

He even compared Trump, who has often undermined the role of Congress, to a dictator.

Trump: “I alone can fix this.” Is this guy running for president or dictator? #RNCwithBernie
— Bernie Sanders (@Bernie Sanders) 1469155638.0

Sanders appeared to side with Sen. Ted Cruz of Texas, who made headlines after refusing to endorse Trump at the convention. Cruz did not acknowledge Trump by name in his speech and urged those in the crowd to "vote your conscience."

Looks like Ted Cruz was right about one thing. Trump does not understand what the Constitution is about. #RNCwithBernie
— Bernie Sanders (@Bernie Sanders) 1469155694.0

A vote for Trump, Sanders insinuated, is a vote for the establishment. Sanders is a progressive who used his presence on the campaign trail to sway voters who have expressed reservations about Clinton's past and present Wall Street ties.

Our movement understands that what we don't need is Trump's huge tax breaks for millionaires. #RNCwithBernie
— Bernie Sanders (@Bernie Sanders) 1469155730.0

Finally, Sanders took Trump to task for his climate change denial. Trump has often called change "a hoax." Trump's top pick for energy secretary is oil and fracking billionaire Harold Hamm, who took the stage to declare that “[e]very time we can’t drill a well in America, terrorism is being funded.” Despite an announcement from NASA this week that this June was the hottest June on record, the convention adopted a platform spurning the Paris climate agreement, the Kyoto Protocol, and the U.N. Framework Convention on Climate Change.

According to Twitter analytics, Sanders' tweets were the most retweeted tweets during Trump's acceptance speech.