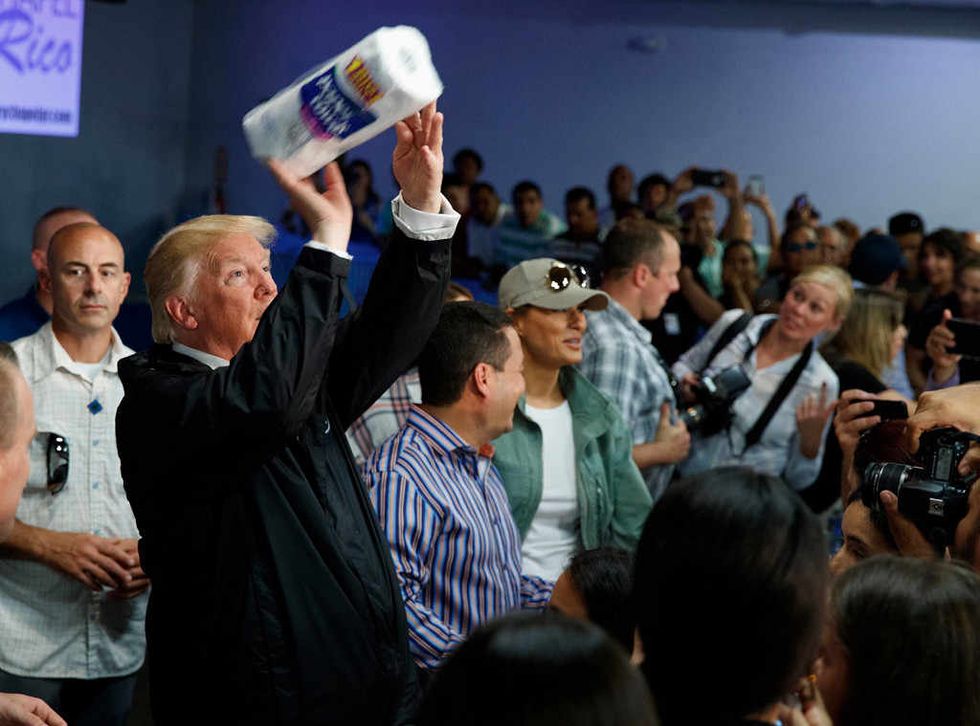 It seems tossing rolls of paper towels into the crowd like basketballs isn’t what the citizens of San Juan were hoping for from their president during his visit on Tuesday to the Hurricane-ravaged capital of Puerto Rico. Then after his comments failed to sympathize with island’s current crisis, Mayor Carmen Yulin Cruz went so far as to dub President Trump their “Miscommunicator-in-chief”.

Upon arrival, Trump thanked government officials for their efforts, and even praised Mayor Cruz, whom just prior last weekend he attacked on Twitter, accusing her of having “poor leadership ability.”

When Trump and Cruz met for the first time on Tuesday, the president reportedly ignored the mayor after briefly shaking hands.

Shortly after his arrival, Trump revealed a lack of empathy for Puerto Rico’s plight by saying it was not a "real catastrophe," going so far as to celebrate the storm’s low death toll. He began by joking about the cost of the disaster relief, and how it is hurting the United States’ budget:

I hate to tell you, Puerto Rico, but you’ve thrown our budget a little out of wack because we’ve spent a lot of money on Puerto Rico, and that’s fine, and we’ve saved a lot of lives.

He went on to compare Puerto Rico to Katrina, saying that the island should be “proud” that more people didn’t die:

Around the same time as his comments, it was announced that the death toll rose to 34, and is expected to increase as millions of American citizens face starvation and disease in the days to come.

Continue to the next page for Mayor Cruz's response...

Mayor Cruz was not impressed, admonishing Trump for his comments: “I would hope that the President of the United States stops spouting out comments that really hurt the people of Puerto Rico,” she said. “Rather than [being the] Commander-in-Chief, he sort of becomes Miscommunicator-in-Chief.”

Cruz continued her comments, saying that Trump displaced a lack respect for the people of Puerto Rico during his visit. “It just goes to prove [his] lack of sensibility,” Cruz said.

You’re coming to a place where people are expecting you to be comforting. They’re expecting you, frankly, to speak as to which actions are going to happen… When I heard him say, and I quote, ‘Puerto Rico you have thrown our budget out of whack for all the money we have spent here,’ it doesn’t make you feel good. This is about two things. It’s about respect for the Puerto Rican people, and it’s about saving lives.

Later when Trump visited a church, his tossing of toiletry supplies into the crowd garnered harsh criticism.

Republicans: Kneeling for the National Anthem is offensive. Trump: What if I throw paper towels at hurricane survi… https://t.co/ccBNmIfC5J
— Full Frontal (@Full Frontal) 1507058882.0

Trump's administration also finds itself on the defensive for its treatment of Puerto Rico. The President of Oxfam America, an international organization dedicated to alleviating poverty, criticized the U.S. government for being too slow in their response.