Samhain Rituals 2017: What are the Traditions & Meaning of This Celtic Holiday? 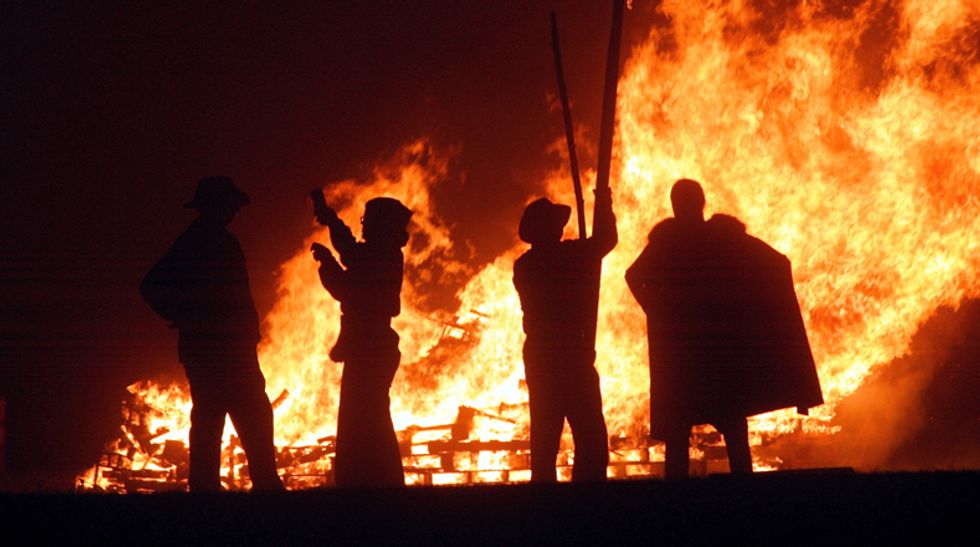 Revellers stand near the fires during the first of the Bonfire Night celebrations on September 25, 2004 in Burgess Hill, England. Bonfire Night is related to the ancient festival of Samhain, the Celtic New Year, and otherwise known as Halloween. (Dave Etheridge-Barnes/Getty Images)

Samhain marks the end of the harvest season and the beginning of winter. It begins at sunset on October and goes until sunset on November 1. Because of this and its related feasts, it is sometimes described as the Celtic New Year. The calendar of the Celtic League begins and ends on Samhain.

In its original celebration, Samhain was viewed as a "liminal time," where the boundary between the physical world and the "Otherworld" could be more easily crossed. Modern pagans continue to hold this view. They believe that the supernatural "Aos Si," comparable to fairies or elves, can more easily enter the mortal realm during Samhain. It is also believed that the souls of the dead revisit their past homes during Samhain. To appease both of the Aos Si and the dead, feasts are held.

In ancient Celtic times, people also would dress-up in disguises and go door-to-door and recite a verse in exchange for food. This gave rise to the modern concept of trick-or-treating.

Probably the most famous of the Samhain rituals is the bonfire. Bonfire season begins in autumn in Celtic countries and continues until November 5. To practitioners of modern paganism, bonfires are still seen as having protective and cleansing powers, just like their ancient forbearers. According to Circle Sanctuary, one common bonfire ritual is to, "Write down an outmoded habit that you wish to end and cast it into the Samhain flames as you imagine release. Imagine yourself adopting a new, healthier way of being as you move around the fire clockwise."

Bonfires are held until the largest bonfire celebration, the Lewes Bonfire. The Lewes Bonfire is held on November 5 and not only commemorates Samhain but also Guy Fawkes Night and the 17 Protestant martyrs burned at the stake in the 16th century and 17th century by Catholic royalty. Like the Samhain ritual of burning something to do away, bonfires typically burn an effigy, usually made up to look like Guy Fawkes.

Despite going by a different name, Samhain and its Celtic origins continue to be an inspiration to modern rituals and traditions. Other ways to celebrate this special time of year include going on a reflective nature walk, learning about family history, and visiting a cemetery that has loved ones buried in it.