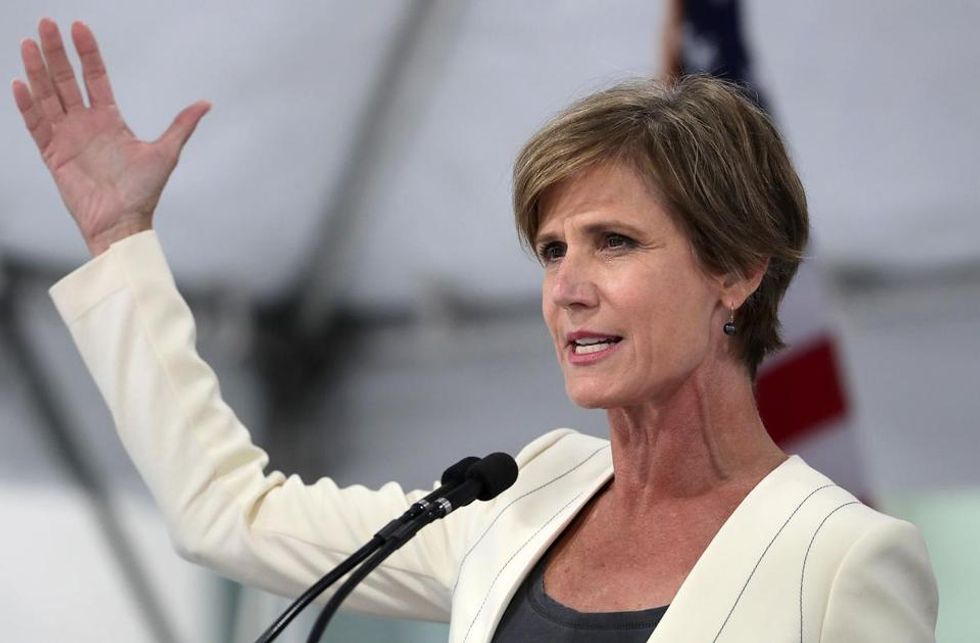 In a passionate––and, at times, personal––speech, Sally Yates, the acting attorney general fired by President Donald Trump for refusing to defend his travel ban, told the graduating class at Harvard Law School yesterday why she defied the president's executive order.

“The defining moments in our lives often don’t come with advance warning," she said. “They can arise in scenarios we would have never expected and they don’t come sometimes with the luxury of a whole lot of time to go inside yourself for some serious introspection.”

Yates was on her way to the airport to catch a flight home to Atlanta on a Friday in January when she learned from news reports that the president had signed an executive order restricting travel from seven Muslim-majority countries. "This was the first we had even heard of it," she said of the ban. Within hours, the Justice Department found itself tasked with defending the order around the country. By Monday, she learned that she would have to take a position on the order's constitutionality.

“This is not what I was expecting,” she said, but it was “illustrative of an unexpected moment, when the law and conscience intersected and a decision had to be made in a very short period of time.”

After reviewing the legal challenges, reading cases and conferring with lawyers within the Department of Justice, Yates concluded that the law would force her people to argue it “was not intended to disfavor Muslims,” despite "the numerous prior statements that had been made by the president and his surrogates regarding his intent to effectuate a Muslim ban."

“I believed that this would require us to advance a pretext, a defense not grounded in truth,” Yates told the graduates, “so I directed the Department of Justice not to defend the ban.”

Yates admitted she grappled with whether she should resign, as some of her critics argued she should have done. Those who disapproved of her decision, she said, presented a "fair question."

"But I believed then, and believe now, that resigning would have protected my personal integrity, but it would not have protected the integrity of the Department of Justice,” she said.

Though Yates made her decision just 72 hours after the Trump administration issued the ban, she said the reasoning and judgment that went into it were 27 years in the making, the amount of time she served in the Department of Justice.

“You too will face weighty decisions, where the law and conscience intertwine, and while it may not play out in such a public way, the conflict you’ll feel will be no less real, and the consequences of your decision also significant,” she said. “The time for introspection is all along the way, to develop a sense of who you are and what you stand for, because you never know when you’re going to be called to answer that question.”

“Doing your job means you are not simply a reflection of someone else’s talents or opinions. You’re the person to whom a leader turns when he or she needs to hear the truth," she continued, in what appeared to be a veiled reference to the president. She later added that “the rule of law and the principle that our law enforcement and intelligence agencies must be free to do their work free of political interference and intimidation.”

“The arc of the moral universe does indeed bend toward justice, but it doesn’t bend there on its own,” she said. “And so I would urge you to grab hold of that arc and not let go because the people of our country and indeed the entire world are counting on you.”