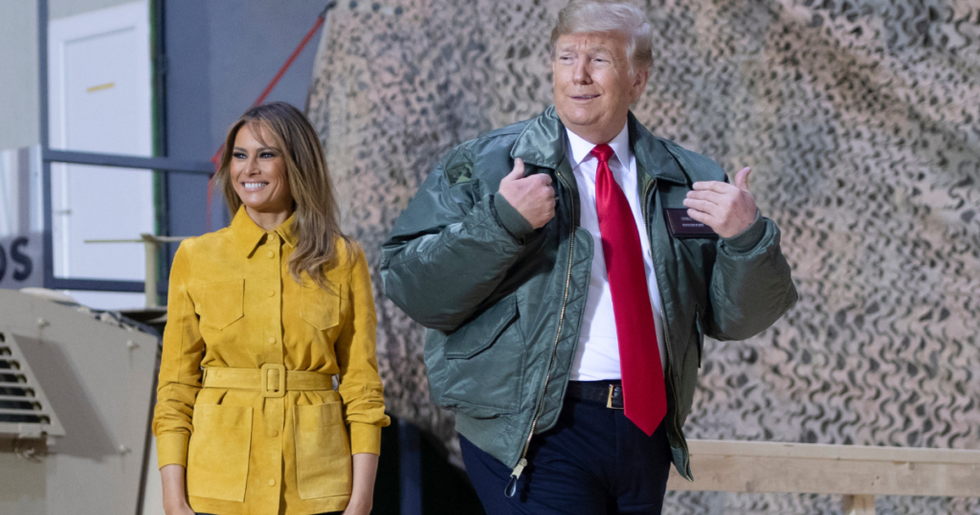 TOPSHOT - US President Donald Trump and First Lady Melania Trump arrive to speak to members of the US military during an unannounced trip to Al Asad Air Base in Iraq on December 26, 2018. - President Donald Trump arrived in Iraq on his first visit to US troops deployed in a war zone since his election two years ago (Photo by SAUL LOEB/AFP/Getty Images)

President Donald Trump's impromptu visit to Iraq on Wednesday has sparked outrage among Iraqi lawmakers, who condemned the presidential cameo as a violation of Iraqi sovereignty.

Trump surprised the nation on December 26 by dropping in on American peacekeeping forces stationed in the Al Anbar Province. marking his first such trip.

An emergency session of parliament was called by Islah parliamentary bloc leader Sabah al Saadi “to discuss this blatant violation of Iraq’s sovereignty and to stop these aggressive actions by Trump who should know his limits: The U.S. occupation of Iraq is over.”

The presence of U.S. troops faces opposition from both ends of the Iraqi political spectrum.

Shi’ite cleric Moqtada al-Sadr, Islah's head and an opponent of Iran, wants the U.S. occupation of Iraq to end. Qais al-Khazali, the leader of the Shi'ite Asaib Ahl al-Haq militia, enjoys the sympathy of Tehran and threatened to push the American military out by force.

"A visit to a US military base without taking into account diplomatic norms reveals the reality of the American project, al-Khazali tweeted. "The response of Iraqis will be by the decision of the parliament to remove your military forces against your nose and if you do not come out we have the experience and the ability to get it out in another way that your forces have come out humiliated In 2011."

Islah's rival bloc, Bina, described Trump's visit in a statement as "a flagrant and clear violation of diplomatic norms and shows his disdain and hostility in his dealings with the Iraqi government." The president's stopover “places many question marks on the nature of the U.S. military presence and its real objectives, and what these objectives could pose to the security of Iraq," Bina said.

Some Americans like the idea of bringing our troops home from Iraq.

@NBCNews Great news. America soldiers can come back the USA to go to school and build the community and do whatever… https://t.co/4rYqFm6E2B
— Lilian Kattelmann (@Lilian Kattelmann) 1545923615.0

Others, however, note that Trump's freewheeling presidency is affecting our allies and making the world less safe.

@NBCNews That’s what I don’t understand, he’s withdrawing from Syria an active war zone but not Iraq which is relat… https://t.co/Qlcs6GNKMR
— Ilona Mitchell (@Ilona Mitchell) 1545922746.0

Beyond all that, reports have emerged that Trump and Iraqi Prime Minister Adel Abdul Mahdi had a “disagreement over how to conduct" a meeting between the two leaders, which culminated with Abdul Madhi's office rejecting Trump's offer to meet at Ain al-Asad military base.

One resident of Baghdad, on the other hand, was a bit more indifferent.

“We won’t get anything from America,” said Mohammad Abdullah. “They’ve been in Iraq 16 years, and they haven’t given anything to the country except destruction and devastation.