Donald Trump's Interior Secretary Just Doubled Down on Trump's Claim That 'Mismanagement' Is to Blame for Forest Fires, and He Has a New Group to Blame 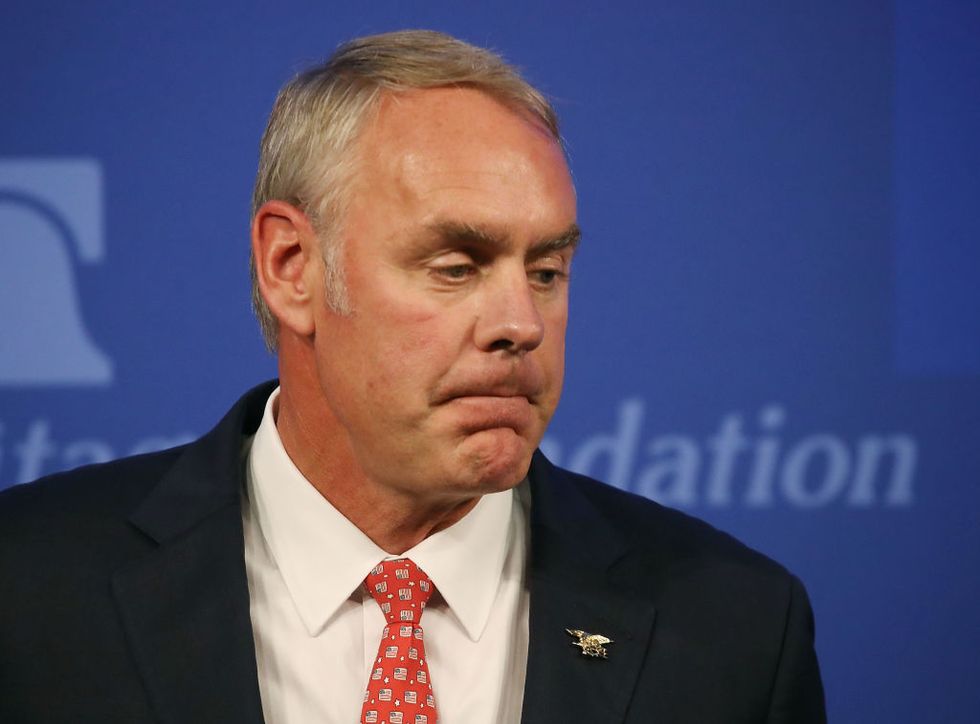 WASHINGTON, DC - SEPTEMBER 29: Interior Secretary Ryan Zinke delivers a speech billed as "A Vision for American Energy Dominance" at the Heritage Foundation on September 29, 2017 in Washington, DC. Zinke also addressed criticism of his travel practices, after it was reported that he and his aides have taken several flights on private or military aircraft, including a charter plane that cost taxpayers more than $12,000 last June. (Photo by Mark Wilson/Getty Images)

At the height of the massive wildfire in California that killed over 70 people and destroyed countless lives, President Donald Trump shocked the nation by blaming...California. The president said that a lack of adequate forest management created dry conditions that exacerbated what has now become the largest wildfire in California's history. The vast majority of California's public forests are managed by the federal government and these fires spread in populated urban areas as well.

Nevertheless, in a harrowing display of consistency, the Trump administration is doubling down on the erroneous claim—with a new scapegoat to boot.

Trump's Secretary of the Interior, Ryan Zinke, echoed Trump's sentiments that poor forest management is to blame for the wildfires.

And who's to blame for the so-called poor management?

If you ask Ryan Zinke, it's the environmentalist movement, with Zinke saying on a radio show for the far-Right Breitbart:

“I will lay this on the foot of those environmental radicals that have prevented us from managing the forests for years and, you know what, this is on them...The president is absolutely right. This is as much about mismanagement over time."

The claim is that environmentalists fought for forests to grow uninterrupted and unmonitored, which created prime conditions for the fire. It should be noted that Zinke himself used $39,000 of wildfire funds for a helicopter tour that flew over Nevada and was completely unrelated to forest fires.

Twitter thought his misplaced blame on "environmental radicals" was ludicrous.

@thehill Hey Zink, here’s one you didn’t think of! Those environmentalists diverting all those California rivers in… https://t.co/cVSNyV4GfV
— Charley (@Charley) 1542665114.0

@Newsweek If climate change is to blame, why aren't well manicured parks burning to the ground by the day?
— John Johnson (@John Johnson) 1542655416.0

As some pointed out, denying that steps must be taken to minimize the damage wrought by climate change is the more radical position.

Zinke's comments, to many, indicate what's been a running theme of the Trump administration as a whole: He's ethically questionable and woefully unqualified.

Federal prosecutors are reportedly looking into pursuing a criminal investigation of Zinke for potential ethics violations.

Officials are looking into a land deal between the chair of oil field services company Halliburton and a foundation owned by Zinke and his wife. The deal would bring developments on land owned by the Zinkes' foundation, substantially boosting the property values.

Though Zinke has denied that man-made climate change is a hoax (as the President has claimed in the past), he has fought for expanded oil dependence as well as for coal and gas.

These latest comments led people to point this out.

@CREWcrew @NancySinatra Ryan Zinke should NEVER have been Secretary Of The Interior he is unqualified a Trophy Hunt… https://t.co/1YtzvSEjkZ
— Big Cats (@Big Cats) 1542229215.0

As the death toll in California continues to rise, it's unclear how the Trump administration will find a solution if its officials keep misidentifying the problem.