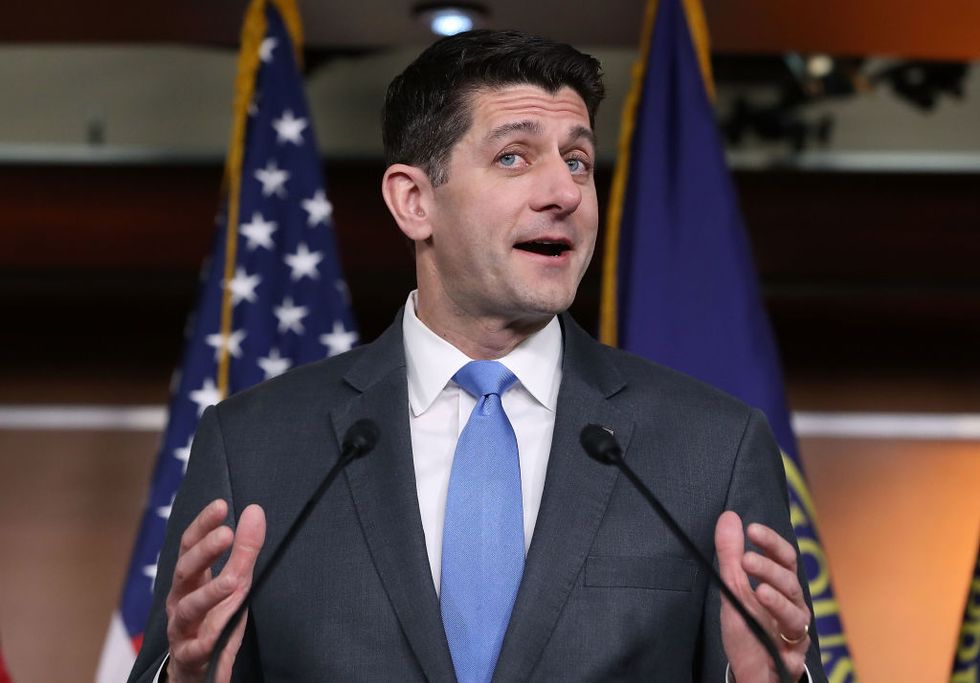 In 2011, Father Patrick Conroy, a Jesuit priest affectionately known as Father Pat on Capitol Hill, became the chaplain of the House of Representatives. But Father Pat's time in service to Congress will soon come to an end thanks, according to the priest's resignation letter, to House Speaker Paul Ryan.

The move by the Wisconsin Republican House leader, which has come to light after NBC obtained a copy of the letter, has angered House members on both sides of the aisle.

In his letter, dated April 15 and addressed to Ryan, the priest states:

As you have requested, I hereby offer my resignation as the 60th Chaplain of the United States House of Representatives. The position is one which I did not seek nor strive to assume, but I have seen it as a blessing and I have considered it one of the great privileges of my life."

The reason Ryan requested Conroy's resignation is apparently related to a prayer he gave in late 2017 at the height of the tax debate. Ryan, who describes himself as a devout Catholic, reportedly took exception to Father Pat's strict adherence to the Jesuit tradition in regards to politics.

Before the House voted on the GOP tax plan last November, Father Pat asked for the poor to be foremost in the minds of the House members.

As legislation on taxes continues to be debated this week and next, may all members be mindful that the institutions and structures of our great nation guarantee the opportunities that have allowed some to achieve great success, while others continue to struggle. May their efforts these days guarantee that there are not winners and losers under new tax laws, but benefits balanced and shared by all Americans."

And the Speaker's office made it quite clear to Conroy that his prayer was not welcome. According to the New York Times, "a staffer came down and said, We are upset with this prayer, you are getting too political."

Despite the text of his resignation letter, Speaker Ryan's spokesperson, AshLee Strong,  states Father Pat Conroy decided to resign and merely informed the Catholic Ryan in his capacity as head of the House of Representatives.

In response to the contents of the letter, Gerry Connolly, Democratic Representative for Virginia, started a letter asking for signatures from fellow house members. The letter asks Ryan to explain why Conroy was dismissed.

Meanwhile at home, one of the people running for Ryan's soon to be vacant seat in the house, Democrat Randy Bryce, also raised the issue of the clerics resignation. Paul Ryan announced April 11 that he would not be seeking reelection for his house seat.

Others in and out of government are also speaking out and asking questions.

@IronStache @tiniebeany So the devout Catholic fired the House Chaplain for asking GOP to think about the poor?! I… https://t.co/MXWJKrtkxT
— 15stormie (@15stormie) 1524784088.0

Conroy was well liked among the people he served, but also followed the Jesuit tradition of outspokenness in defense of those less fortunate. The Catholic order is well known within the faith for their willingness to wade in on social issues.

Jesuits, members of the Society of Jesus, a Roman Catholic order of religious men founded by St. Ignatius of Loyola, are noted for their educational, missionary, and charitable works. The order was a leading force in the reformation and modernizing of the Catholic Church.

Ryan's move sparked outrage on both sides of the aisle.

"Just outrageous," is how New York Democratic Representative Joe Crowley characterized the Speaker's request. Crowley also pointed out Father Pat "would be the first chaplain of the House of Representatives in the history of the United States" to be asked to resign. He added,

As someone who is a personal friend of Father Pat's, as a lot of Democrats and Republicans are, I find it outrageous that he would be fired."

It is just a sad commentary on America in the House that is supposed to be the House of the People — if we want to protect freedom of speech, a prayer here, then where are we going to protect it?"