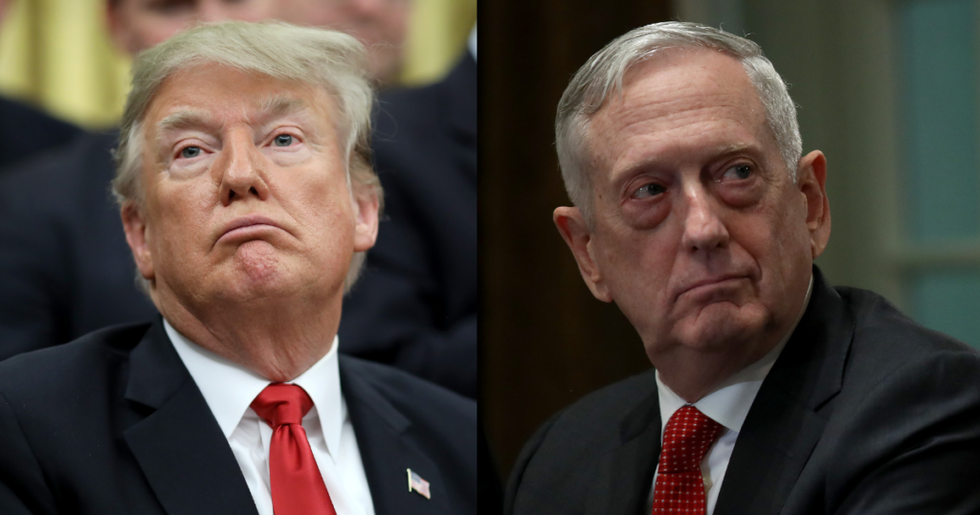 Julia Davis reported in The Daily Beast on Friday that Konstantin Kosachev, head of the Foreign Affairs Committee in the Upper House of the Russian Parliament, said that “the departure of James Mattis is a positive signal for Russia, since Mattis was far more hawkish on Russia and China than Donald Trump.”

Kosachev said Trump's desire to maintain his relationship with Russia was "more important than keeping James Mattis at his post," calling it "an interesting signal, and a more positive one” for Russia.

Olga Skabeeva, the host of Russian state TV's 60 Minutes, was giddy over Mattis' break from Trump.

"Secretary of Defense Mattis didn’t want to leave Syria, so Trump fired him," Skabeeva gloated. "They are leaving Syria.”

American are “losers," Skabeeva said, "since Putin has defeated them in every way." Skabeeva's co-host, Evgeny Popov, beamed: “Trump is ours again—what are you going to do?”

“It seems to Americans that we won on every front: the U.S. Secretary of Defense has been removed, we unquestionably secured a complete, unconditional victory in Syria," Popov said.

Popov agreed, adding: “On top of that, Rusal sanctions have been lifted with Trump’s hands."

Skabeeva then stated what has become ominously apparent.

“Americans say, it’s because he is beholden to Putin," Skabeeva said. "Is that logical? Yes, it is.”

Twitter's response: yeah, no kidding, "they can have him." Ouch.

This certainly shatters the spin by White House Press Secretary Sarah Huckabee Sanders, who tried to downplay Russia's joy over Mattis' quitting and the drawdown of troops in Syria.

“The idea that Putin is happy about this [Trump's decision to withdraw US forces from Syria] is ridiculous," Sanders said Friday. "It puts them at a greater risk, so I think that's just silly.”

Really, Sarah? At least pick something a little less obvious to lie about.

No one is buying it.

"If the decision to withdraw was made, then it is a correct one," the Russian president said. "As far as the withdrawal of US troops is concerned, I really don't understand what it's about, because the US has been present for some 17 years in Afghanistan," he said. "They're (the US) still talking about withdrawing them, but they haven't done it yet."