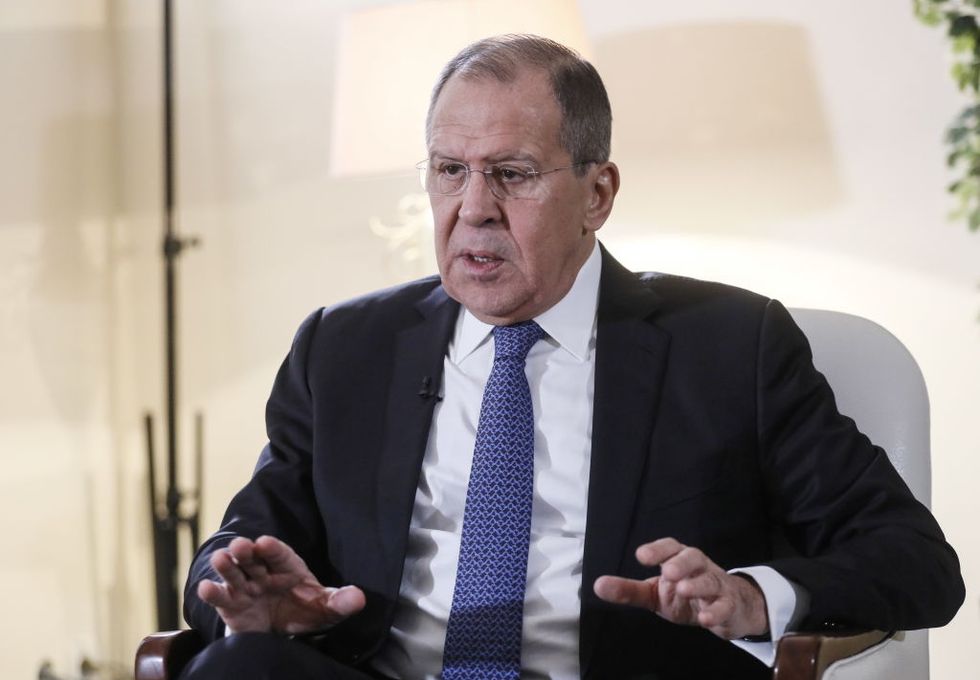 The Russian foreign minister's remarks follow North Korea's successful testing of a new intercontinental ballistic missile on Wednesday, which now puts the United States mainland, including the East Coast, within range of Kim Jong-un's nuclear arsenal. North Korea reports their new Hwasong-15 missile soared to an altitude of 2,780 miles and flew 590 miles before landing in the sea near Japan.

Trump responded to the latest missile testing by demanding sanctions on North Korea: "Just spoke to President XI JINPING of China concerning the provocative actions of North Korea. Additional major sanctions will be imposed on North Korea today. This situation will be handled!"

Russia condemns the missile testing as well, also calling the action as "a provocation," but Lavrov says how the United States is handling the situation is just as dangerous and provocative.

“The latest U.S. actions look designed to deliberately provoke Pyongyang into taking new extreme action,” Lavrov told reporters in Belarus. He is referring to the U.S.-South Korea joint military exercises now scheduled for December, which U.S. officials had previously told him would not take place until the spring so as to allow current tensions to defuse and subside.

“We were encouraged by that approach. And then suddenly ... they announced large-scale exercises in December. We have the impression that it was all done specially to get Kim Jong Un to 'fly off the handle' and take another reckless step.”

President Donald Trump is well known for trying to rile North Korea's leader on Twitter, with comments such as this one that he tweeted this morning.

"The Chinese Envoy, who just returned from North Korea, seems to have had no impact on Little Rocket Man. Hard to believe his people, and the military, put up with living in such horrible conditions. Russia and China condemned the launch."

The Chinese Envoy, who just returned from North Korea, seems to have had no impact on Little Rocket Man. Hard to be… https://t.co/ZySsGTqQHp
— Donald J. Trump (@Donald J. Trump) 1512044700.0

Trump often refers to Kim Jong-un as "Little Rocket Man," a playground insult and retort in their ongoing feud of words, which many fear could escalate into military action.

The United States and South Korea air forces are scheduled to hold what they are calling a regular joint drill early next month with six U.S. F-22 Raptor stealth fighters taking part. But at this time, Lavrov and others see these drills as a deliberate attempt to find a pretext for war.

“The Americans need to explain to us all if they want to find a pretext to destroy North Korea. Let them say it directly ... then we can take a decision about how to react,” said Lavrov.

That pretext seems evident in the words of U.S. ambassador Nikki Haley. Speaking at an emergency UN Security Council meeting, she warned the North Korean leadership that it would be destroyed if war were to break out.

"We have never sought war with North Korea, and still today we do not seek it," ambassador Haley said. "If war does come, it will be because of continued acts of aggression like we witnessed yesterday. And if war comes, make no mistake - the North Korean regime will be utterly destroyed."

Call for Sanctions Against North Korea

Haley also called for other countries to sever all ties with North Korea's capital Pyongyang, and to impose sanctions that include cutting trade links and expelling North Korean workers.

This affects Moscow, as it sells oil products to North Korea, and thousands of North Korean workers in Russia send their wages back to authorities in Pyongyang. Lavrov believes the ambassador's call for sanctions against North Korea is the wrong course of action, calling it a "big mistake."

“We regard this negatively,” Lavrov said. “We have already said many times that sanctions pressure has exhausted itself.” Lavrov added that the United States is ignoring the UN's repeated requests for peaceful talks with North Korea, so as to deescalate current tensions.

North Korea's latest missile test and the U.S. subsequent call for sanctions against the country are the most recent actions of a back-and-forth struggle between the two countries. Last month North Korea’s deputy U.N. ambassador issued a dire warning of the possibility of nuclear war with the United States, after previously saying they might test a nuclear weapon in the Pacific as a direct retaliation to President Donald Trump's own threats of military action.