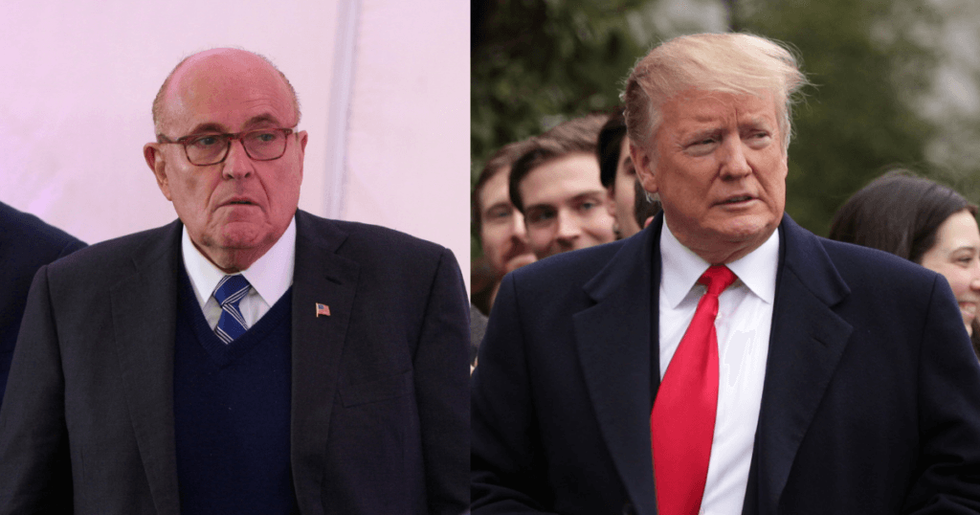 In a phone interview with The Washington Post on Friday, Giuliani remarked on the suspense Mueller's impending report is causing.

“It’s like waiting for a baby or, maybe, it’s more like waiting for a jury. You make your case, then you have to wait days for that verdict. If the report is good — and finds no wrongdoing by the president — I’ll give out cigars.”

Twitter pounced on Giuliani's bizarre analogy, which really amounts to a tacit admission that he and his client have no idea what to expect.

@costareports In other words, “if we get by with these crimes, I give out cigars.” Only they know the depth of thei… https://t.co/QQzc06fhUY
— Ronald Defenbaugh (@Ronald Defenbaugh) 1553263296.0

The report should be fantastic if Trump is innocent.

Giuliani explained that he has been advising Trump - who routinely calls the investigation a "hoax" and "witch hunt" - on how to respond to whatever it is Mueller finds.

“It was nothing new,” Giuliani said. “He has become sort of tired of it, and his view is that it’s going to happen one day, and we’ll be ready.”

Giuliani also said that neither he nor Trump has any inside knowledge as to the status of Mueller's probe or when his report will be ready.

“We just don’t know, and they haven’t told us anything,” Giuliani said.

“The last exchange was pretty mild, and that’s after having heated debates a long time ago,” he continued. “Frankly, we thought it could be done four or five weeks ago. I’m not sure about the reason for the delay.”

Earlier this week, Giuliani told NBC News that he and team Trump are "not expecting" additional indictments from Mueller, even though the special counsel has been reliably tight-lipped throughout the entire ordeal.

Rudy Giuliani told me overnight they’re “not expecting” new indictments. He and all of is Washington on high alert for the Mueller Report.
— Kristen Welker (@Kristen Welker) 1553259608.0

But Giuliani has been making predictions about when Mueller might drop his report, and other eventualities - without any evidence - for months.

@kwelkernbc Didn't he say Mueller was going to be done around last September? Maybe he isn't the best source on this subject
— Scott Henke (@Scott Henke) 1553260020.0

@kwelkernbc @JenniferJJacobs Well of course they’re “not expecting” indictments. I would not take this for gospel a… https://t.co/KuYuxv4Rw5
— Fringephile (@Fringephile) 1553262867.0

Giuliani added that he and other attorneys on Trump's legal team have been working on a "counter report" to defend against any possible accusations of wrongdoing.

“I’m not sure we’ll have to use it,” Giuliani said. “We don’t know how detailed their report will be.”

Giuliani continued: “If they report with facts, we’ll say something right away and write something over the weekend. If there are no facts, I’m not sure we’ll put out a report. If it’s a statement from Barr saying he simply received it, I don’t think we’ll say anything.”

Trump told reporters before leaving for Mar-a-Lago on Friday that he has "no idea about the Mueller report.”