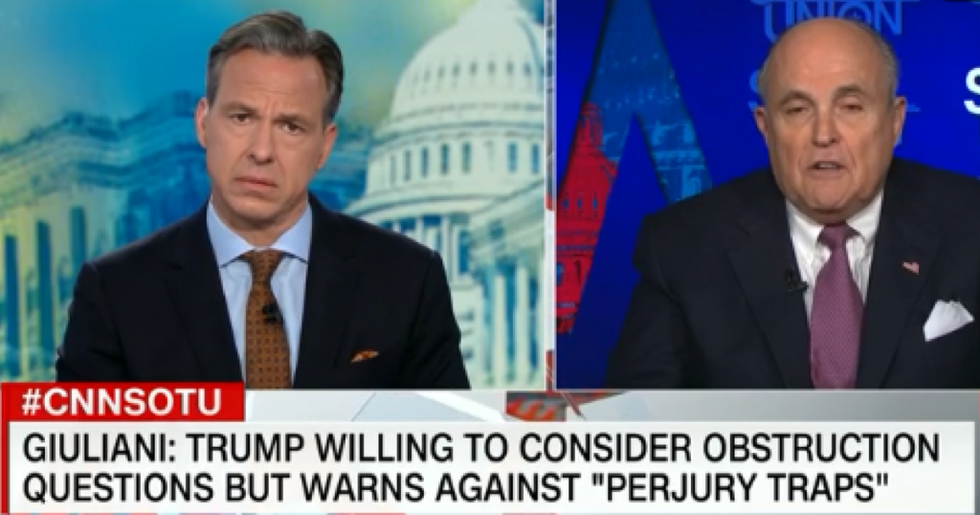 President Donald Trump's attorney @RudyGiuliani discusses the ongoing Russia investigations and the possibility of… https://t.co/H6FA6Tby2d
— State of the Union (@State of the Union) 1534089780.0

Giuliani said Trump never pressed Comey to "let Flynn go," which contradicts not only sworn statements by Comey, but Giuliani's own version of events.

"There was no conversation about Michael Flynn," Giuliani said on Sunday's State of the Union. "The President didn't find out that Comey believed there was until about, I think, it was February when it supposedly took place. Memo came out in May. And in between, Comey testified under oath, in no way had he been obstructed at any time."

Comey testified to the Senate last year that Trump had asked him to "see your way clear to letting this go, to letting Flynn go. He is a good guy. I hope you can let this go."

Comey was investigating whether Flynn, who briefly served as National Security Advisor, had lied to federal officials about contacts he had with Russian nationals during the 2016 presidential campaign.

Trump fired Comey in May of 2017 because he felt "this Russia thing" was a hoax, something the president maintains to this day. Comey's firing prompted the Justice Department to appoint a special counsel, Robert Mueller, to investigate alleged ties between Russia and the Trump campaign and whether Trump obstructed justice by insisting Comey ease up on Flynn.

Mueller has been seeking an interview with Trump, which Giuliani has called a "perjury trap."

"They can say it's perjury if they elect to believe Comey instead of Trump," the former New York City mayor said. Negotiations over the terms of a Mueller-Trump interview have been ongoing.

Giuliani insisted it was Comey's version of events that had changed, and that the president would testify he never attempted to get Comey to back off of Flynn.

Giuliani maintained that even if Trump had tried to get Comey to go easy on Flynn, it wouldn't have amounted to obstruction of justice anyway.

"Then all of the sudden in May he says he felt obstructed," Giuliani added. "He felt pressured by that comment, 'you should go easy on Flynn.' So we maintain the President didn't say that."

But Tapper had the receipts of Giuliani acknowledging what Trump said to Comey regarding Michael Flynn.

"You told ABC News last month that the president told Comey, 'Can you give him a break?'" Tapper said to Giuliani.

"I never told ABC that," Giuliani said. "That’s crazy. Never said that. I said that is what Comey is saying Trump said. I have always said the president denies it."

Tapper then played a July 8 clip from The Week in which Giuliani told ABC's George Stephanopoulos Trump asked Comey to "give him [Flynn] a break."

On July 30, Giulaini told Fox News Trump had asked Comey to "exercise his prosecutorial discretion" in his investigation into Flynn's ties to Russia.

"The obstruction thing is crazy," Giuliani said. "He had a right to fire Comey. That’s what it’s all about. He had a right to say to Comey, ‘Give Flynn a break.’ There’s no investigation at the time. And not only that, he didn’t tell him, ‘Don’t investigate him, don’t prosecute him’ ― he asked him to exercise his prosecutorial discretion because he was a good man with a great war record."

One thing is clear: the public thinks Giuliani has gone off the deep end.

"Rudy Giuliani is a lunatic."

What will Giuliani say next?