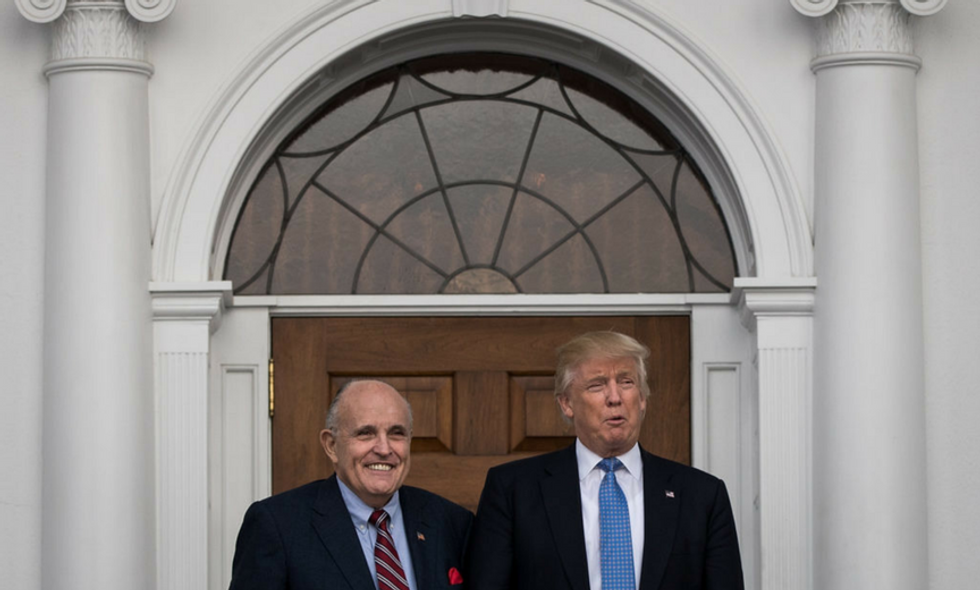 Despite recent assertions that Trump would not have to comply with a potential subpoena from Special Counsel Robert Mueller, Giuliani was beating a different drum in 1998, when he insisted that President Bill Clinton had to comply with a federal subpoena.

On Sunday, Giuliani said that Trump can exert executive privilege as a way of avoiding answering a subpoena from Mueller. Speaking to ABC's George Stephanopoulos, Guiliani said "we don't have to" comply with a subpoena.

They don't have a case on collusion, they don't have obstruction ... I'm going to walk him into a prosecution for perjury like Martha Stewart did? He's the president of the United States. We can assert privilege other presidents [have].

Giuliani's comments are the latest round of ammunition being lobbed at Mueller and his team of prosecutors, who for nearly a year have been looking into possible collusion and obstruction of justice by Trump and his associates. Mueller was hired by the Department of Justice after Trump fired then-FBI Director James Comey on May 9, 2017.

But in 1998, Giuliani opined that Clinton should be treated like any other citizen in the realm of criminal law. “You gotta do it,” he told Charlie Rose. “I’m mean, you don’t have a choice.”

Then there is a procedure for handling that. You go before a judge and a judge decides whether or not he has a recognizable exemption or privilege from testifying. And if a judge decides that he doesn’t, you have to testify. You don’t have a choice about it.

Giuliani also referenced President Richard Nixon and Watergate scandal, which "resolved the fact that the president is not above the law, is not able to avoid subpoenas.” Giuliani told Rose that like a defendant in any other criminal case, the president has the right to ask a judge to decide whether proper procedures are being followed.

And, if a judge agrees with that, fine. But, if a judge doesn’t, then you have to testify.

Giuliani has also hinted at the possibility of Trump taking the 5th in a potential interview with Mueller.

"How could I be confident" Trump won't plead the 5th, Guiliani remarked. "I have a client who wants to testify ... So he may testify and we may actually work things out with Bob Mueller," he added.

Trump himself has said:

"The mob takes the Fifth. If you’re innocent, why are you taking the Fifth Amendment?"

Trump, however, has said that his willingness to sit down with Mueller extends only to the point of being "treated fairly." Giuliani is skeptical of any benefit that would arise from Trump sitting down with Mueller.

Not after the way they've acted. I came into this case with a desire to [have the president talk to Mueller] and they just keep convincing me not to do it.

Trump and his legal team are expected to decide whether or not they will agree to an interview with Mueller by May 17.

Trump has no negotiating power with Mueller. I don’t know what he and Giuliani are smoking. If Mueller wants him to… https://t.co/5bIPAigvB6
— Scott Dworkin (@Scott Dworkin) 1525841166.0