Don Jr. Eviscerated Roy Moore For Suggesting He Might Run for Senate Again, and Trump Just Awkwardly Piled On 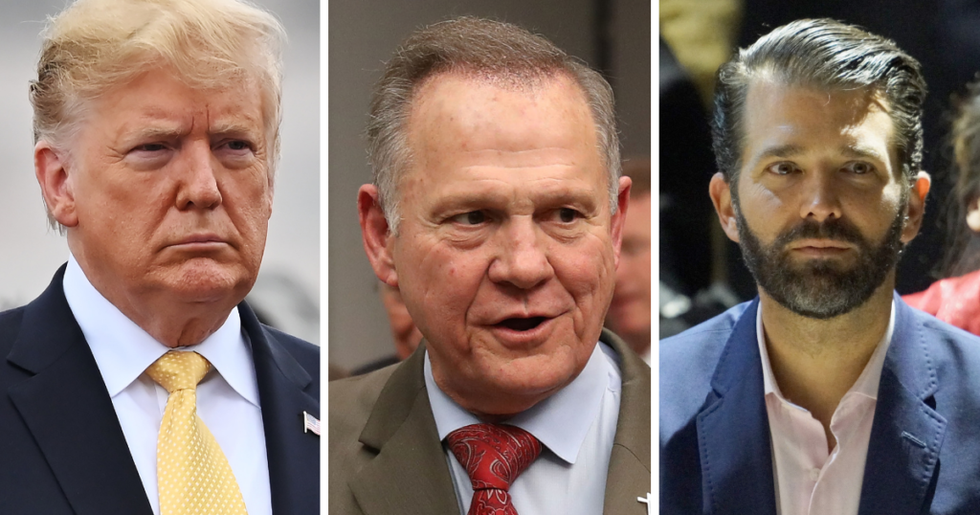 According to Bradley Byrne, who announced his own bid for the GOP Senate nomination in February, Moore intends on announcing his candidacy next month.

“People who I believe know what they’re talking about say that Judge Moore intends to announce his candidacy for the U.S. Senate in June. I welcome him to the race," Byrne said in an interview with The Hill's Scott Wong.

Byrne believes that Moore simply has too much baggage to win.

“I think people are very concerned that we Republicans lost a U.S. Senate seat because he was our nominee in 2017 and we don’t need to do that again,” Byrne said.

In response, Moore, an accused pedophile who was removed twice as chief justice of the Alabama Supreme Court for refusing to uphold federal court rulings, tweeted Tuesday afternoon that he "will beat Doug Jones" if he decides to once again throw his hat into the race.

But Moore is already facing intense headwinds from people who fought for him the last time around - most notably, the Trumps.

Donald Trump Jr. tore into Moore for failing to win in deep-red Alabama.

"You mean like last time? You’re literally the only candidate who could lose a GOP seat in pro-Trump, pro-USA ALABAMA." Junior replied to Moore's tweet. "Running for office should never become a business model. If you actually care about #MAGA more than your own ego, it's time to ride off into the sunset, Judge."

Early Wednesday morning, the president urged Moore not to run because he believes Moore will lose:

"Republicans cannot allow themselves to again lose the Senate seat in the Great State of Alabama. This time it will be for Six Years, not just Two. I have NOTHING against Roy Moore, and unlike many other Republican leaders, wanted him to win. But he didn’t, and probably won’t."

Trump's biggest concern is that a Jones victory could impede Republicans' ability to stack the courts with right-wing judges.

"If Alabama does not elect a Republican to the Senate in 2020, many of the incredible gains that we have made during my Presidency may be lost, including our Pro-Life victories," Trump added. "Roy Moore cannot win, and the consequences will be devastating....Judges and Supreme Court Justices!"

Hold up, Trump has "nothing against Moore?"

Twitter noticed that for Trump, losing to a Democrat is far worse than being accused of serially sexually assaulting teenage girls.

@realDonaldTrump You have nothing against a child molester who was banned from a mall? Republicans forget the small shit. 🙄
— Jeff Hudson (@Jeff Hudson) 1559135299.0

@realDonaldTrump You have nothing against a guy who was banned from malls because he molested young girls in a car… https://t.co/sD0LuL0WWf
— Rage Donkey™️ (@Rage Donkey™️) 1559130130.0

Recall that in 2017, Trump was gung-ho for Moore, calling him a "really great guy" after his primary victory over Luther Strange.

Spoke to Roy Moore of Alabama last night for the first time. Sounds like a really great guy who ran a fantastic race. He will help to #MAGA!
— Donald J. Trump (@Donald J. Trump) 1506509813.0

In the weeks leading up to the special election, Trump wholeheartedly endorsed Moore several more times.

Democrats refusal to give even one vote for massive Tax Cuts is why we need Republican Roy Moore to win in Alabama.… https://t.co/cTTqHa3YXL
— Donald J. Trump (@Donald J. Trump) 1512386225.0

When Moore lost, Trump pretended he was had really been gunning for Strange.

The reason I originally endorsed Luther Strange (and his numbers went up mightily), is that I said Roy Moore will n… https://t.co/DcgJPmLTXy
— Donald J. Trump (@Donald J. Trump) 1513164124.0

We remember, and this is fantastic fodder for Democrats in 2020.

@realDonaldTrump On the other hand, women will be able to CONTROL THEIR OWN BODIES WHEN A Dem wins.
— Sharon O'Brien (@Sharon O'Brien) 1559138248.0