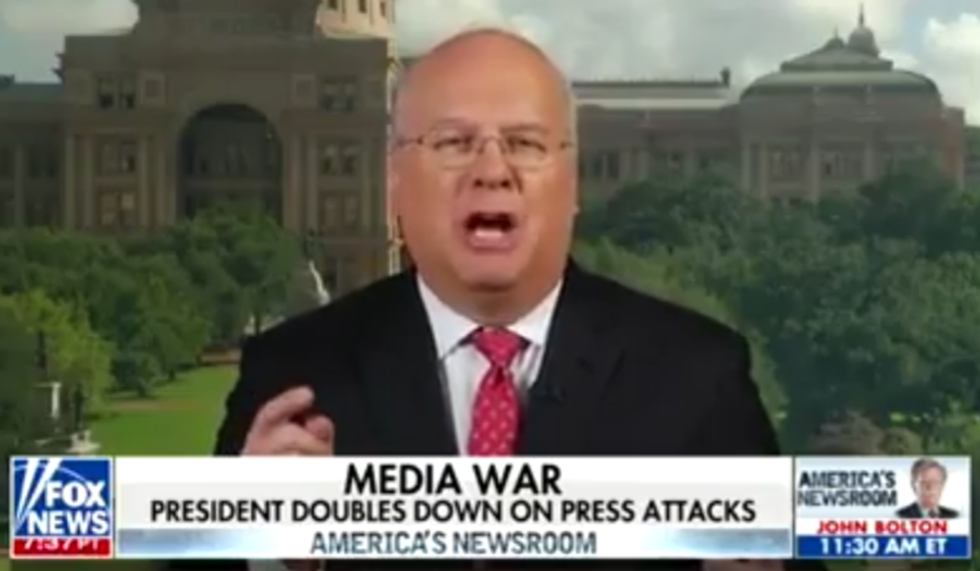 Karl Rove—Republican consultant and frequent policy advisor—knows his way around the political game. The man credited with the rise of George W. Bush, President Bush himself referred to Rove as "The Architect" in his 2004 reelection victory speech.

On Monday, "The Architect" shared some of his expert advice with the current resident of 1600 Pennsylvania Avenue, President Donald Trump, on the Fox News program America’s Newsroom.

I think the president would be well-advised to tone down the rhetoric."

The comment came after America's Newsroom host Sandra Smith shared a weekend Twitter post from the President. In it Trump again refers to the media as the "enemy of the people."

The Fake News hates me saying that they are the Enemy of the People only because they know it’s TRUE. I am providing a great service by explaining this to the American People."

Trump goes on to claim the media causes division and even war. Then the President describes them as "very dangerous" and "sick!".

Rove began his response by stating:

Look I think this is over the top. Every President has a problem with the media."

"I was in the White House for seven years and I didn’t like the coverage they gave George W. Bush," Rove continued, "particularly the liberal New York Times, but I think the President is better if he makes his case on a case-by-case basis.

That is to say when they say something that is wrong and then he respectfully disagrees with them. I think calling names is not helpful to our country from any side."

Rove took specific exception to the President's repeated use of a favorite phrase of dictators throughout the 20th century when referring to anyone that criticized them.

Calling them the enemy of the people that just grates on me. I grew up during the time of the Cold War."

That is a phrase that was used by Stalin against the enemies of the communist regime. I think the president would be well advised to tone down the rhetoric."

Seeming to speak directly to the President, Rove stated emphatically:

"There are people," Rove explained, "that go to those rallies and when he says 'the fake news' and 'the media' and 'they're terrible' and points at them, they scream and yell, but to win the election this fall he's got to win the people who are up for grabs in this election."

The longtime Republican adviser then ran through some poll numbers, provided by Fox News.

Only 28 percent of voters in the United States strongly approve of Trump, which is the hardcore base Rove spoke of.

But 51 percent disapprove of the President, Rove pointed out. And of those, 41 percent strongly disapprove.

Continuing to pander to the 28 percent—as Trump does when he attacks Hillary Clinton and Barack Obama on Twitter or leads chants of "lock her up" or "build the wall" on camera at his continuous Trump rallies—will not change the minds of the majority who currently disapprove of his job performance.

While the adulation and almost worshipful rally atmosphere appeals to the President, it gains him nor the GOP any new supporters. And 28 percent cannot win a national election or retain Congress.

Rove closed by encouraging the President to reach out to his opposition instead of pandering to his followers.

Several took to Twitter to thank Rove for the insight, including Breitbart News...

@RadioFreeTom With this economy, Trump should EASILY be over 60% approval. It's the negativity and divisiveness t… https://t.co/AeiphyxdUQ
— Tony Engel (@Tony Engel) 1533582122.0

@RadioFreeTom It would require a kind of discipline he doesn’t have. Attack mode has worked for him his entire life… https://t.co/FtSAmM2WKK
— Jillian (@Jillian) 1533581811.0

@RadioFreeTom @WalshFreedom hey you people who rallied Trump on in the beginning it may be too late for you to spea… https://t.co/lgcWdobo1s
— Diana LaFleur (@Diana LaFleur) 1533581466.0