Republican Candidate for Governor of Florida Just Doubled Down on His Support for Trump in a Questionable New Ad, and Twitter Is Disturbed 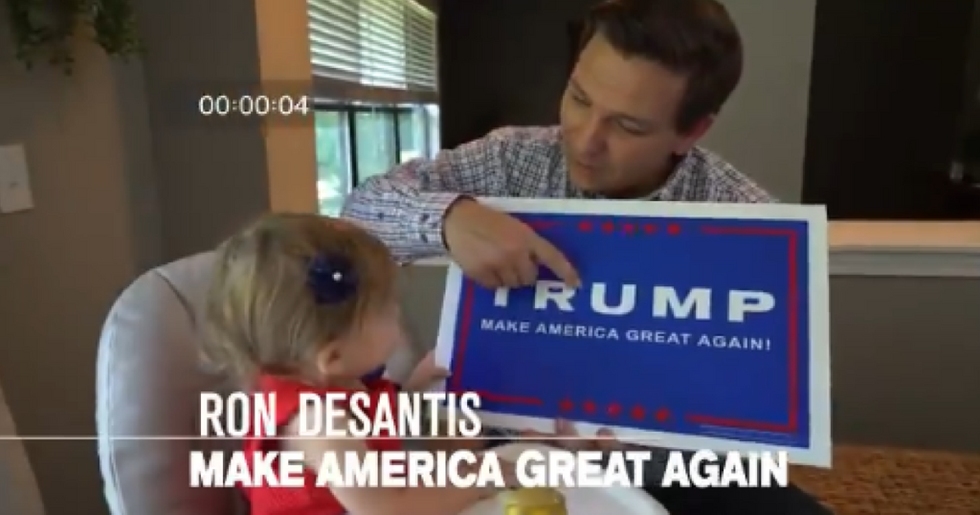 Florida Republican gubernatorial candidate Ron DeSantis released a bizarre ad Monday morning in which he enlisted his wife to show all the ways he is supportive of President Donald Trump.

The ad opens with an introduction from DeSantis's wife, Casey: "Everyone knows my husband Ron DeSantis is endorsed by President Trump, but he's also an amazing dad." The ad attempts to correlate good parenting and supporting Trump.

The rest of the ad lacks any discernible campaign platform and could easily be mistaken for satire. Such is 2018.

"Build the wall," DeSantis says to his toddler daughter, Madison, shown playing with toy building blocks. DeSantis "reads stories," his wife says, just before the camera cuts to the congressman reading The Art of the Deal to an infant.

"Then Mr. Trump said, 'you're fired,'" DeSantis read from the book. "I love that part."

DeSantis is "teaching Madison to talk," Mrs. DeSantis states, as her husband points to and reads a "Make America Great Again" poster to their daughter.

"People say Ron's all Trump, but he is so much more," Mrs. DeSantis tells viewers.

Really? Because the ad is nothing more than DeSantis parroting Trump. Anyway...

The Congressman is then shown standing over his infant son, who is wearing a MAGA shirt, saying: "Bigly [big league?], it's so good."

The ad ends with Mrs. DeSantis saying: "I just thought you should know."

The ad was met with swift mockery on social media. Where exactly is a border wall going to be placed in Florida?

"I literally cringed watching this."

People even accused DeSantis of teaching his kids to be racist.

Others found the ad embarrassing and insulting to DeSantis's kids because the Internet is forever.

@RonDeSantisFL This is one of the most embarrassing things I’ve ever watched
— SkipperEvan (@SkipperEvan) 1532977204.0

It's not like this is cultish behavior or anything.

@RonDeSantisFL Well, that most certainly was creepy. I've never experienced a cult before, so I'm glad I get this o… https://t.co/Er4E9MUpnQ
— Kyle Mattingly (@Kyle Mattingly) 1532980112.0

I am absolutely honored to receive the FULL ENDORSEMENT of President Donald Trump. He has thrown his support behind… https://t.co/iTUjwHPvfP
— Ron DeSantis (@Ron DeSantis) 1529696791.0