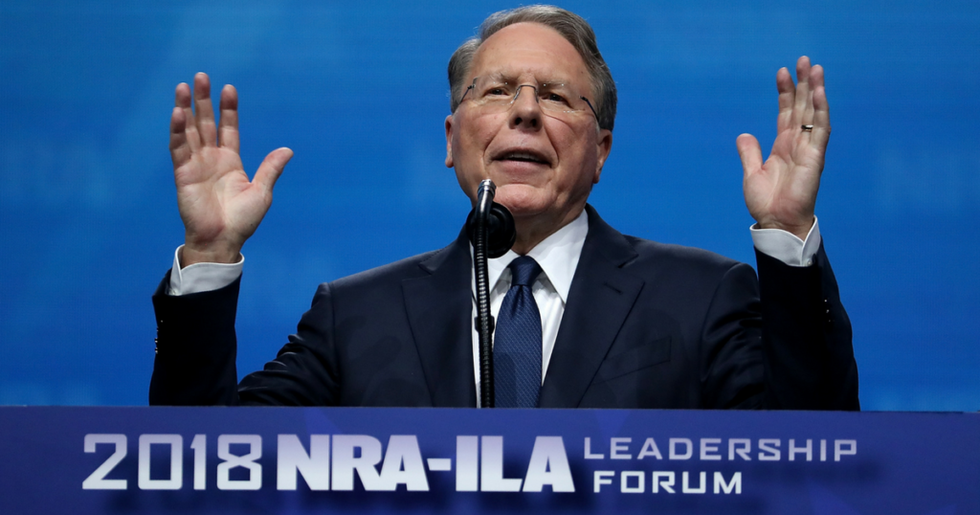 The National Rifle Association is in dire financial trouble and may "be unable to exist… or pursue its advocacy mission" according to court filings obtained by Rolling Stoneon Friday.

Since May, the country's largest gun lobby has been mired in lawsuits filed by New York Governor Andrew Cuomo (D) and New York State Department of Financial Services, who claim the organization was illegally selling NRA-backed insurance policies to firearm owners.

In their complaint, the NRA said New York State sought to damage the group financially by forcing the NRA to "sever the NRA’s ties to a wide range of financial service providers, from insurance companies to banks." The NRA has said the state's lawsuit amounts to a "blacklisting campaign" which has inflicted "tens of millions of dollars in damages."

@AaronSeitsinger @DLoesch Here is the actual lawsuit that the NRA filed, which contains the exact information upon… https://t.co/rqjAdoGxBw
— Jon Zal (@Jon Zal) 1533314582.0

These "abuses," as the complaint put it, "will imminently deprive the NRA of basic bank-depository services … and other financial services essential to the NRA’s corporate existence."

"If their abuses are not enjoined," the NRA pleaded, "they will soon, substantially, succeed."

The NRA told the court that "it will be unable to exist as a not-for-profit or pursue its advocacy mission," accusing New York State of trying to "silence one of America’s oldest constitutional rights advocates."

In addition to its plea, the complaint alleged that Cuomo "has a history of abusing his regulatory power to retaliate against his political opponents on gun control issues." Cuomo was referred to as a "political opportunist who has consistently sought to gain political capital by attacking the NRA."

"The impact of Defendants’ campaign on the NRA’s ability to access essential financial services has been far greater than—and, clearly distinct from—the impact of any public controversy relating to recent tragedies."

In April and in the interest of public safety, Cuomo encouraged insurers to break ties with the NRA following the shooting at Majorie Stoneman Douglas High School in Parkland, Florida.

The complaint says Cuomo launched a "malicious conspiracy to stifle the NRA’s speech and induce a boycott of the NRA" with the intent of "suppressing the NRA’s pro-Second Amendment viewpoint." Cuomo's tweeted, the NRA charges, constitutes "unlawful conduct with the intent to obstruct, chill, deter, and retaliate against the NRA’s core political speech."

The lack of access to financial services, coupled with mounting legal costs, the NRA alleges, has caused "irrecoverable loss and irreparable harm." Financial filings showed the NRA overspent its budget by $46 million in 2016.

The NRA's complaint states that the group has also lost its insurance coverage, which in New York State, means their operations must cease.

"Insurance coverage is necessary for the NRA to continue its existence," the complaint reads. NRA cannot maintain its physical premises, convene off-site meetings and events, operate educational programs … or hold rallies, conventions, and assemblies" without liability coverage, which all businesses must have in New York.

The NRA's media operation is also in immediate danger of being suspended as a result of lack of access to insurance.

The NRA’s inability to obtain insurance in connection with media liability raises risks that are especially acute; if insurers remain afraid to transact with the NRA, there is a substantial risk that NRATV will be forced to cease operating.

The NRA said it "could be forced to cease circulation of various print publications and magazines."

Cuomo has described the NRA's lawsuit as "a futile and desperate attempt to advance its dangerous agenda to sell more guns."

Twitter savaged the NRA as nothing more than a money-making operation that dupes its members into funneling their hard-earned cash into the organization's corporate coffers.

@RollingStone you mean they might not have enough money to bribe politicians?
— lifematters (@lifematters) 1533310269.0

Others wondered if the NRA's financial troubles are connected to revelations that Maria Butina, a Russian spy, had infiltrated the organization.