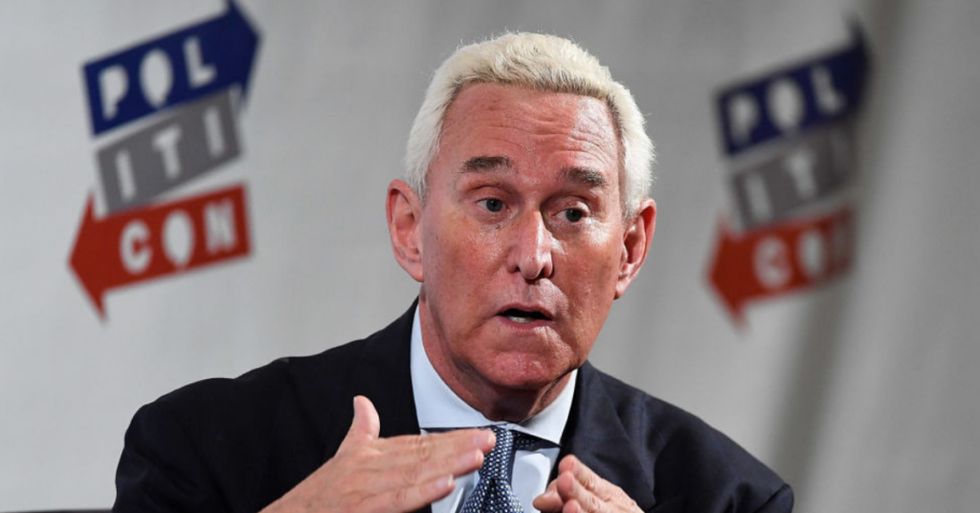 Stone, who in January was arrested as part of Special Counsel Robert Mueller's probe, posted a Roger Rabbit-style photo illustration on his Instagram story suggesting he’d been framed. Although Instagram stories disappear after 24 hours, a screenshot soon began to circulate online.

Stone was immediately accused of "flouting" a federal judge's gag order amid calls that he be taken into custody.

Roger Stone got a second chance. But of course this arrogant buffoon thinks he can flout the judge’s gag order. It’… https://t.co/Dce5xR2DAt
— Steven Beschloss (@Steven Beschloss) 1551672078.0

Roger Stone is playing with fire and he is asking to get burned. When he claimed on Instagram that he was being fra… https://t.co/oWvqieNjZI
— Robert Hayes (@Robert Hayes) 1551652270.0

Stone is also under scrutiny for the imminent release of a book about Mueller's case.

This isn't the first time Stone has violated his gag order either. On Friday, Federal Judge Amy Berman Jackson ordered Stone's attorneys to explain by today why they didn't inform her about the book, The Myth of Russian Collusion: The Inside Story of How Trump Really Won, which may also violate the gag order. Jackson has said she would consider sending Stone to jail for continued violations.

Stone also found himself in trouble with Judge Jackson last month after he posted a picture of her under crosshairs to Instagram.

“Please inform the Court that the photograph and comment today was improper and should not have been posted. I had no intention of disrespecting the Court and humbly apologize to the Court for the transgression,” Stone said in a letter submitted to the court by his attorneys.

The fallout prompted Jackson to call Stone back to court, where she why the gag order and conditions of his release "should not be modified or revoked":

“Defendant is ordered to show cause at a hearing to be held on Thursday, February 21, 2019 at 2:30 P.M. as to why the media contact order entered in this case and/or his conditions of release should not be modified or revoked in light of the posts on his Instagram account.”

Stone's mockery of the Russia probe goes even further.

In January, shortly after Stone's arrest, internet sleuths resurfaced a rather unbecoming video of Stone mocking Special Counsel Robert Mueller while drinking a glass of vodka.

“Oh my God, I’m busted drinking Russian vodka. Mueller, arrest me…libtards,” says Stone in a video he posted to his own Instagram account on February 5, 2018, a cavalier attitude that prompted critics to suggest he was tempting fate with the special counsel.

A February 2017 interview Stone gave to TIME also resurfaced. At the time, Stone scoffed at a New York Times report that revealed he was “among a couple of Trump associates under federal investigation for alleged ties to Russia.”

“I have not been contacted by anybody in law enforcement. There is absolutely no foundation to this whatsoever. The intelligence community could not have found email transmissions or financial transactions involving me and the Russians and the Trump campaign because there are none,” he said then, adding:

Prosecutors say Stone's trial is expected to last up to eight days. Stone has pleaded not guilty to charges that he obstructed an official proceeding, made false statements and engaged in witness tampering.