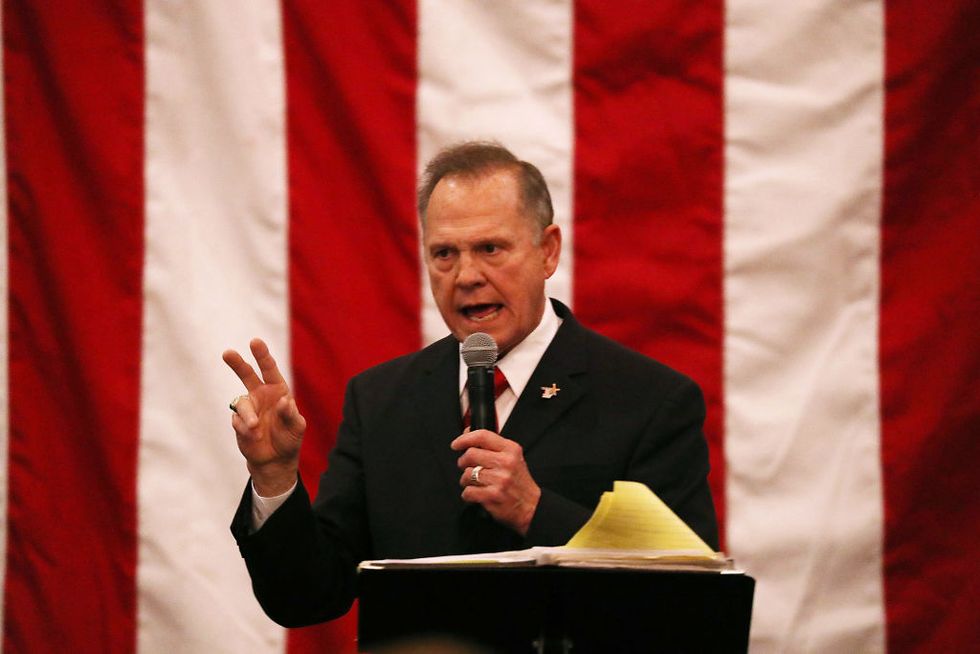 “Moore used Hitler’s ‘big lie' quote, and actually used it correctly,  rather than claiming it meant Hitler was admitting to be a big liar all the time, as our politicians and (((media))) always do,” Ray wrote.

The Daily Stormer writer is referring to a statement Moore made in 2011 on what CNN described as a “conspiracy-driven radio show” about former President Barack Obama’s birth certificate. The triple parenthesis that Ray uses around the word "media," also known as an echo, has an explicitly anti-Semitic connotation.

Speaking of anti-Semitic, Moore's wife, Kayla Moore, recently blamed "fake news" organizations such as CNN for the claims of bigotry against her husband. She cited associates and friends as proof that they both are not bigots.

“Well, one of our attorneys is a Jew,” Kayla Moore said. “We have very close friends who are Jewish and rabbis.”

On the 2011 radio show appearance in question, Moore, like Trump, questioned the authenticity of former President Barack Obama's birth certificate. In the interview, Moore said:

Well that’s, that’s a problem. You know Hitler once said, "You tell a big enough lie long enough, people [tend] to believe it." And that’s, that’s the problem. We’ve got to look at simple facts of the case, and we need to recognize we need a new administration in Washington. And it just doesn’t, based upon party, we need like people that uphold the Constitution not undermine it.

Ray also highlighted on the Daily Stormer Moore's comments on that same radio show regarding the Constitutional amendments. Still a chief justice at the time, Moore told the hosts of the radio show that erasing all the amendments after the original ten would “eliminate many problems” in the country.

Ray agrees with and endorses Moore's statement because in his mind it would limit voting in America to white men only. “No more women and n-----s voting!” Ray wrote. “No more misquoting Hitler!”

Moore, who Trump fully endorses in his desperate run to control the Senate, has been a controversial figure in American politics long before many allegations of sexual misconduct surfaced earlier this year. While serving as one of Alabama's Chief Justices, Moore was suspended, twice, for refusing applications for same-sex marriage licenses -- even after that the United States Supreme Court ruled that same-sex marriage is a constitutional right.

There is also the matter of Moore’s belief that America was a better country to live in when slavery was a legal institution. During his campaign earlier this year, an audience member asked Moore for his opinion on when America was last great — a question we all too often now hear thanks to our current president.

Moore responded: “I think it was great at the time when families were united — even though we had slavery — they cared for one another… Our families were strong, our country had a direction.”

Today on December 12, 2017, Alabama will hold the special election to fill the U.S. Senate seat vacated by Jeff Sessions when he became Donald Trump’s Attorney General.

Moore is running against Doug Jones, who made a name for himself as prosecutor against KKK members who killed four African-American girls in the 16th Street Baptist Church bombing. He later served as U.S. Attorney for the Northern District of Alabama under President Bill Clinton, and is endorsed by Senator Cory Booker and former President Barack Obama.

Polls open at 7AM CST and close at 7PM CST. Alabama voters can find their polling locations here.