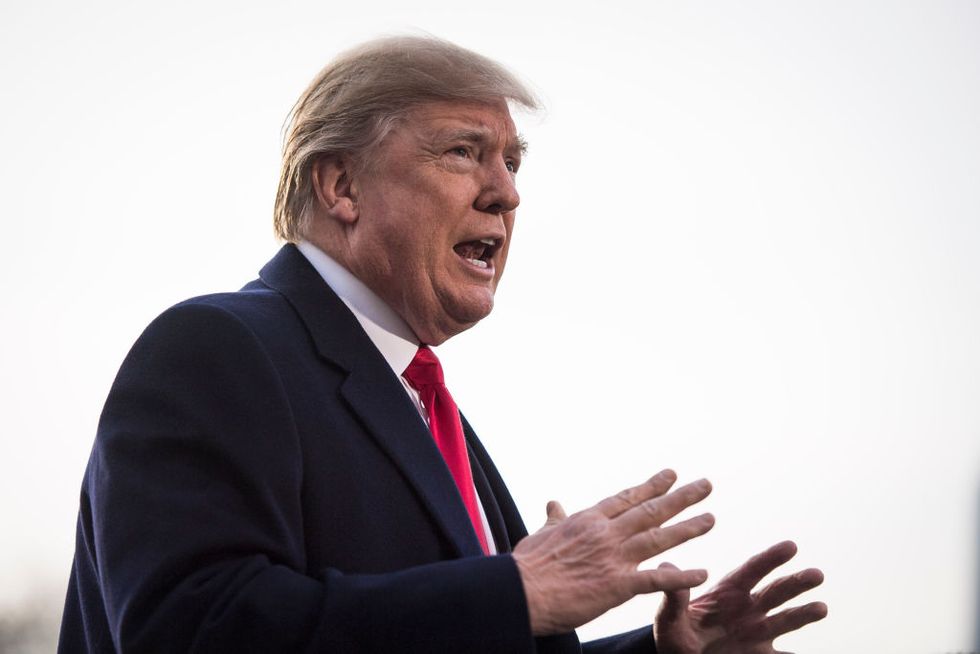 Special counsel Robert Mueller's Russian investigation team served Deutsche Bank with a subpoena for Donald Trump's financial records with the bank, according to a report by German business paper Handelsblatt. The records requested include a large loan in the hundreds of millions that Trump owes to Germany's biggest financial institution.

Both and Handelsblatt and Reuters report that the subpoena was issued several weeks ago, and that it requests information on the bank's dealings not just with Trump, but also with his daughter Ivanka Trump and son-in-law Jared Kushner, and First Lady Melania as well.

President Trump disclosed in June that he owes the bank roughly $130 million, yet sources told The Financial Times in August that the total owed is more like $300 million. This is roughly half still owed of the $640 million Trump borrowed from the bank in 2005 to build Trump International Hotel & Tower in Chicago. In 2008 Trump sued the bank to get out of some of that debt, and settled the case with Deutsche Bank a year later.

Deutsche Bank spokesman Chalie Olivier told Newsweek the bank declines to discuss the matter with the press, as it does not comment on any of its clients. Previously, Deutsche Bank cited privacy laws when they rejected demands in June by U.S. House Democrats to provide details of Trump’s finances.

Deutsche bank was hit with more than $600 million in penalties in January of this year, due to a $10 billion Russian money-laundering scheme that involved its Moscow, New York, and London branches. This followed a $7.2 billion settlement Deutsche Bank reached with the U.S. Department of Justice last December over toxic mortgage assets and the $2.5 billion it agreed to pay in 2015 over interest rate manipulation.

Special counsel Mueller and his team continue to investigate Russia's involvement in the 2016 United States presidential election, with the strengthening possibility of collusion between Trump's campaign and Russian leaders. These financial records could reveal whether or not Trump owes or has received money from suspects connect to Russia.

Over the past 20 years, Trump has done billions of dollars' worth of business with Deutsche Bank, and the president previously said in an interview with the New York Times that Mueller looking into his family's finances beyond Russia would be "a violation." With news of the subpoena, it remains to be seen if Trump will revisit talk of firing Mueller before the investigation can conclude.

Over the past week, Trump has publicly attacked the Justice Department and the Federal Bureau of Investigation, whose reputation he declared Sunday morning to be "in tatters."

But Trump has been quiet on Twitter since yesterday, even though Fox News reported a brief on the subpoena earlier this morning, following an Associated Press report.

In September the IRS shared financial details about members of Trump’s campaign team with Mueller’s investigation. It is assumed that Mueller has access to and has likely seen Trump's infamously unrevealed tax returns.

Mueller's team has been ramping up its investigation in the past month, indicting and striking a guilty plea deal with Trump's former national security advisor Michael Flynn, exploring Jared Kushner's meetings and conversations with Russian officials, and requesting documents from the Justice Department. Yesterday afternoon, Mueller's team rejected the request of Trump's former campaign manager, Paul Manafort, to modify the terms of his house arrest.