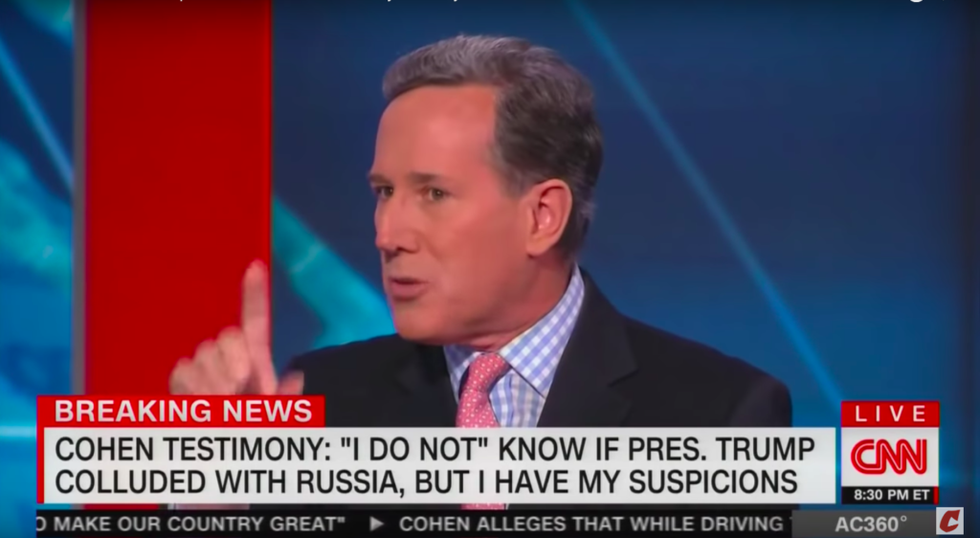 Pennsylvania's former Republican Senator and political commentator Rick Santorum stunned a CNN panel on Wednesday night with his defense of President Donald Trump's and his associates' lies regarding the Trump camp's relationship with Russia.

Host Anderson Cooper asked Santorum what the explanation for so many lies about Russia could be. His answer is quite something.

"The President doesn't tell the truth about a lot of things fairly consistently, so the fact that he's not telling the truth about Russia fairly consistently—at least in the eyes of people around here. Why is that any different? It's not like he's doing something out of character with the Russia investigation that he's not doing in other areas...According to what I hear on this round table and the network, he lies about everything all the time."

Rick Santorum has a unique defense for why there have been so many lies in the Trump orbit when it comes to Russia.… https://t.co/9apvV1NNX3
— Justin Baragona (@Justin Baragona) 1551317985.0

Legal analyst Jeffrey Toobin was stunned, asking Santorum incredulously, "Is that really—Is that really the best defense you can come up with? The fact that 'Oh he lies about everything.'"

Santorum attempted to walk back, stressing that he was pushing back against the argument that the President's lies were out-of-character, when in fact, they're characteristic.

Rick Santorum’s defense of Donald Trump right now on @AC360 is basically that the President lies all the time about… https://t.co/zCipsAtsBX
— John Avlon (@John Avlon) 1551317584.0

Many did agree with Santorum on one thing, however.

The President does lie all the time. Seventy percent of the President's statement listed on Politifact range from mostly false to blatantly false. According to the Washington Post, the President has made over 8,158 false statements since his inauguration.

So it's actually more out of character for Trump to tell the public something truthful.

@thehill That is absolutely true. It would be truly out of character for @realDonaldTrump to be truthful about anything.
— Mad Hatter (@Mad Hatter) 1551321489.0

The constant stream of lies from the President shouldn't come as a surprise in an age where even truth isn't truth.