Former Republican Senator Just Tried to Claim That Climate Scientists Are Driven by Money, and People Are Dragging Him Hard 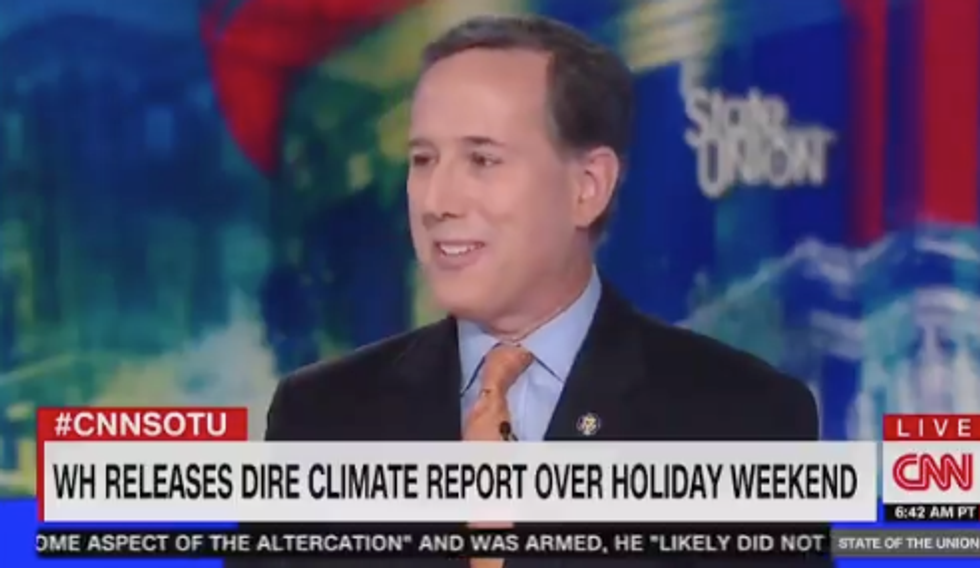 Former Senator Rick Santorum (R-PA) suggested on Sunday that climate scientists are driven by money, following the release of a devastating new report outlining the current and future consequences of unchecked climate change.

The study, which predicted up to a ten percent drop in GDP in coming decades because of climate change, was released on the Friday after Thanksgiving so it would go largely unnoticed by the public.

"Good for them," Santorum chuckled during an appearance on CNN's State of the Union. This prompted host Dana Bash to recoil in her response: “Alright, well, at least you guys are transparent about it."

Santorum charged that the latest report was "generated by people who are in the bureaucracy. These are not Trump appointees.”

Citing President Donald Trump, who has dubbed climate change a "hoax" perpetrated by the Chinese, said that the climate will "go back," and that scientists "have a political agenda," Santorum dug his heels in.

″I think the point that Donald Trump makes is true, which is ― look, if there was no climate change, we’d have a lot of scientists looking for work,” Santorum said. “The reality is that a lot of these scientists are driven by the money that they receive.” Neither of Santorum's or Trump's comments is true.

A gasp can be heard in the studio as Santorum continues his assault on objective reality.

"And of course the money they receive isn't from big corporations... because it's tainted," Santorum said, adding that he "believes" scientists are being funded by people "who support their agenda."

"No one doubts that the climate is changing," the Republican pundit said. "The question is how much does man contribute" (nearly all of it, according to scientists), and "what can man do to actually change it?" Incredibly, Santorum then boasted that no one is asking these questions.

The madness did not end there, however.

When challenged by fellow panelist Symone Sanders, who mentioned the wildfires in California, Santorum blamed the blazes on "the forestry policies of the state of California." Trump last week falsely said that a lack of raking leaves was the cause of the worst infernos in California history. The fires are a direct result of a warming planet.

Santorum is a paid political commentator who has no scientific training or qualifications to negate the science of climate change.

If Santorum had any pertinent financial interests of his own, CNN would disclose that fact, right? Especially after… https://t.co/0I91a7Yb5q
— David Frum (@David Frum) 1543169095.0

Thus, Santorum and his employer CNN got savaged on Twitter.

This Santorum clip is COMPLETELY nuts even by the standards of the intro Trump clips. It's unbelievable that CNN pa… https://t.co/ydTCG521TY
— John Whitehouse (@John Whitehouse) 1543163550.0

This thread is damning and the fact that a network puts on pundits and political hacks like Rick Santorum to speak… https://t.co/f90aYXjNea
— Erick Fernandez (@Erick Fernandez) 1543171534.0

@ErickFernandez Why does CNN keep this bag of wind, Santorum on the panels? Why are there panels? Report the news… https://t.co/fjeMzvhyR8
— Coach Omar (@Coach Omar) 1543178625.0

CNN is "doing real harm to their credibility" by employing Santorum, who offered no evidence to support his claims (because there is none).

Why is CNN not hiring experts to give the public accurate information?

Santorum's assertions about scientists raking in money are completely unfounded and utterly ridiculous.

Where, then, are all the rich scientists?

@mmfa @davidsirota If you harbor doubts about climate change you should ask yourself one question: Is it more like… https://t.co/oiA799PHsk
— John Blackman (@John Blackman) 1543168964.0

Money does drive one aspect of climate change - denial.

Follow the "dark money." It goes to people such as Santorum.

@mmfa Seven of the top 10 biggest companies in the world are energy or automobile manufacturing conglomerates. But… https://t.co/fGgOI1XyGk
— Pé Resists (@Pé Resists) 1543173741.0

@existentialfish @mehdirhasan Scientists are the big shadow money out there for sure. Oil money is nothing compared… https://t.co/BAqB9cZTH8
— Eric Somerville (@Eric Somerville) 1543206128.0

Some people think scientists should be treated like "rock stars."

@existentialfish @mmfa Nothing is more lucrative than research. They’re on to all us science lovers. Nothing but mad dough.
— Christopher Eagan (@Christopher Eagan) 1543196537.0