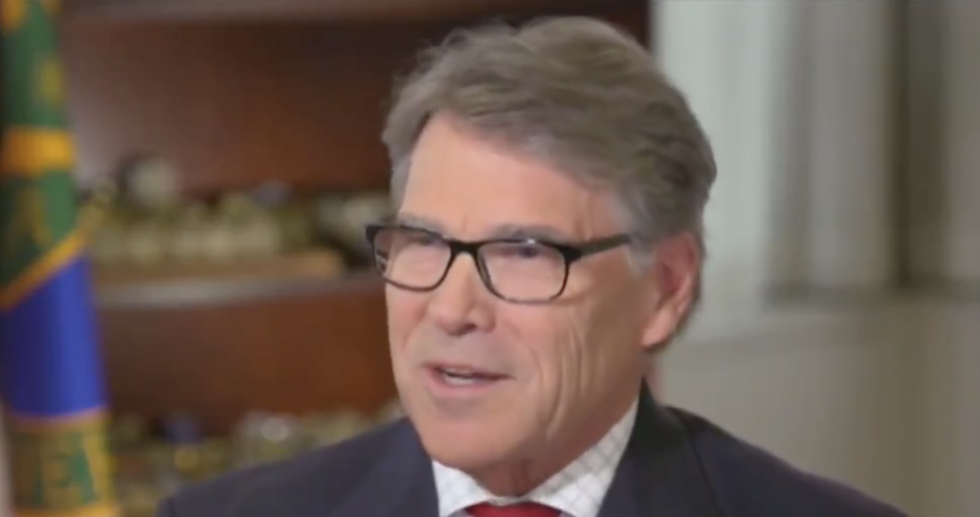 After being implicated as one of the key players in President Donald Trump's corrupt dealings with Ukraine, Energy Secretary Rick Perry—who intends to leave his post at the end of the year—went on Fox and Friends to praise his boss.

Things got weird, however, when praise turned to worship.

Perry recounted an interaction with the President in the interview:

“I said, 'Mr. President, I know there are people that say you said you were the chosen one and I said, 'You were.’ I said, 'If you're a believing Christian, you understand God's plan for the people who rule and judge over us on this planet in our government."

"[Christian Trump supporters] hear the attacks from the media about who he is and his background and they dismiss it and say, 'God has used imperfect people forever because we're all imperfect,' but what he's withstood is really unlike any other mortal could understand."

The deification of Trump isn't new. As Perry alluded to, Trump previously referred to himself as the "chosen one," though insisted he was being sarcastic. Fox host Jeanine Pirro called Trump "almost superhuman."

But people on Twitter claimed Trump was nothing but a false prophet.

Is white American evangelical Christianity in such a state of decadence that there's not at least a few in that com… https://t.co/MFPoJGmvBf
— Jeet Heer (@Jeet Heer) 1574648061.0

@CourtneyHagle @mmfa They really are trying to turn Trump into another "Dear Leader" complete with his own deifying mythology.
— George R. (@George R.) 1574623207.0

This is fundamentally un-American. We the People choose our leaders. The idea that a god chooses instead is dangero… https://t.co/akWsRCtiEw
— Andrew L. Seidel (@Andrew L. Seidel) 1574693233.0

@CourtneyHagle So when do Evangelicals change Christmas to Trumpmas and just finish it already. If Trump is the cho… https://t.co/bLS6XsGPoJ
— Bee Gutjahr (@Bee Gutjahr) 1574622533.0

@CourtneyHagle @mmfa I think what amazes me the most is Fox/GOP believe they are the only ones who have belief in G… https://t.co/oUHFV2eeta
— irene randall (@irene randall) 1574623176.0

You guys, God doesn’t pick the guy who jails the kids and pardons the war criminals, leaves the Kurds for slaughter… https://t.co/aEKqYZC9Wt
— Molly Jong-Fast (@Molly Jong-Fast) 1574644410.0

Perry's comments are an about face from what he said of Trump during the 2015 campaign:

"A man too arrogant, too self-absorbed, to seek God's forgiveness is precisely the type of leader John Adams prayed would never occupy the White House."