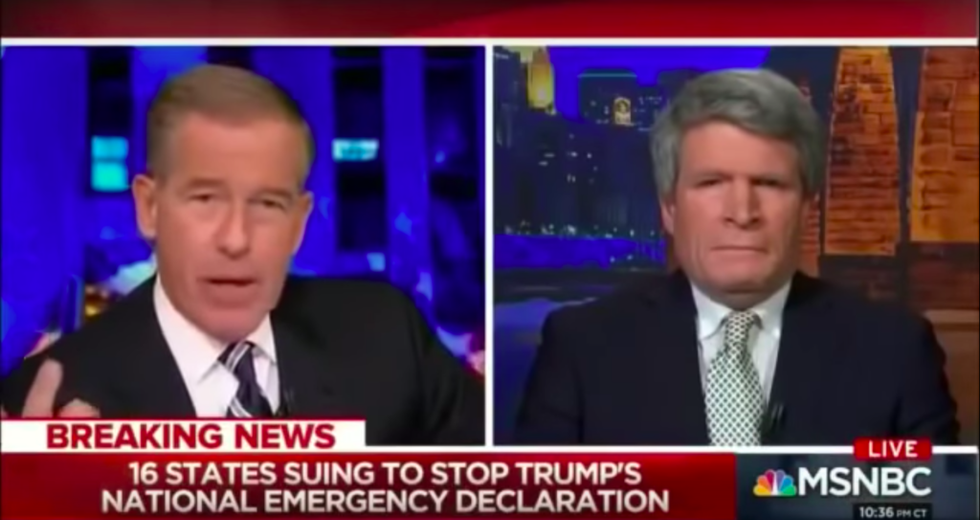 Richard Painter, the former White House chief ethics counsel for George W. Bush, outlined why he believes President Donald Trump should be removed from office, saying last week's national emergency declaration is further indication that the president is "not well at all mentally."

“I think we need to understand, though, why we’re in this situation,” he said during an interview on "The 11th Hour with Brian Williams." “The president is not well at all mentally. I think he’s an extreme narcissist. He has been denied what he wants, his wall, and he is having a hissy fit. He is out of control, and he will not take ‘no’ for an answer from Congress.”

The national emergency declaration is both "unconstitutional" and "illegal," he added, with the potential to deal "enormous damage" to the Republican Party.

Standing in the way of the president's impeachment? The fact that Trump "stocked his cabinet with people who are unwilling to do that, and Congress is apparently unwilling to even try to remove him through impeachment,” he said.

Many concurred with the former Bush ethics czar, who in recent years has emerged as one of Trump's harshest critics in Washington.

Last week, the president declared a national emergency to access billions of dollars to construct a wall at the U.S.-Mexico border after Congress denied his requests for funding. The declaration has ignited a dispute about separation of powers, and the president’s reasoning is likely to face legal challenges.

Many took the president’s statement as further evidence that he is seeking to bypass Congress to fulfill a campaign promise he made to his base.

That statement alone has also opened up the president to criticism.

“Trump predicts that he will lose in court on his national emergency. Until it gets to the Supreme Court. Where he has appointed two justices with long track records of supporting expansive claims of executive power,” said The Washington Post‘s James Hohmann.

Responding to the president’s statement that he “didn’t have to” declare a national emergency, Financial Times editor Edward Luce said: “Trump has just told the Supreme Court why to strike down his national emergency.”

In response to the news, first reported by Bloomberg, Ocasio-Cortez promised that she and her colleague “aren’t going to let the President declare a fake national emergency without a fight.”

16 states have already joined a lawsuit arguing that the president does not have the power to divert funds because Congress, per the Constitution, controls spending.

“Probably the best evidence is the president’s own words,” said Xavier Becerra, the attorney general of California. "I didn’t need to do this, but I’d rather do it much faster.”