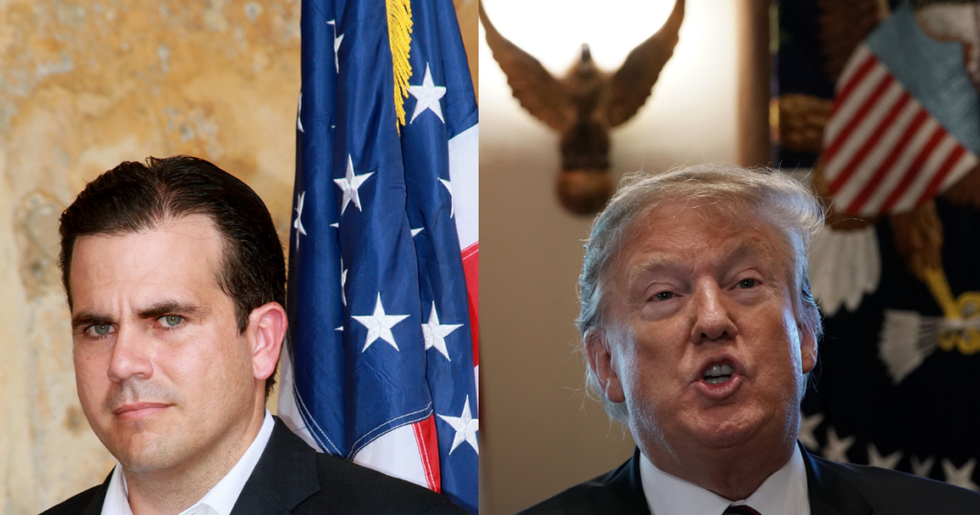 President Donald Trump on Friday instructed the Army Corps of Engineers to scour their budget for funds to build his desired border wall. Trump's orders come in concert with his threat of declaring a national emergency.

The Corps' budget includes $13.9 billion in earmarks for disaster relief in Puerto Rico, which was devastated by Hurricane Maria in late 2017.

"Emergency disaster relief funds have been allocated but not yet obligated through contracts for a variety of projects in states including California, Florida and Texas and in the U.S. territory of Puerto Rico," the Associated Press reported Friday, "that have been ravaged by recent hurricanes, wildfires and other natural disasters, according to the aide familiar with the matter. The money funds a variety of projects, mostly flood control to prevent future disasters."

One official "with knowledge of the proposal" told AP the plan would "fund construction of about 315 miles (500 kilometers) of border barrier."

Another administration official told The Hill that diverting disaster dollars is "definitely an option that has been presented to the president," although they stressed that "nothing has been finalized."

"No wall should be funded on the pain and suffering of US citizens who have endured tragedy and loss through a natural disaster," Rosselló wrote. "This includes those citizens that live in CA, TX, PR, VI and other jurisdictions. Today it’s us, tomorrow it could be you."

No wall should be funded on the pain and suffering of US citizens who have endured tragedy and loss through a natur… https://t.co/qZ8oOAUlts
— Ricardo Rosselló (@Ricardo Rosselló) 1547211369.0

No justification should be considered to reclassify the money that US citizens will use to rebuild their communitie… https://t.co/aPENuTLlqU
— Ricardo Rosselló (@Ricardo Rosselló) 1547211445.0

Rosselló demanded Trump "explicitly state what his intent is," accusing the president of trying to "undermine" rebuilding efforts.

Since the reports are coming from unidentified sources, @Potus should explicitly state what his intent is. Will he… https://t.co/fs9LbWHiRD
— Ricardo Rosselló (@Ricardo Rosselló) 1547211535.0

He called out the President directly:

This is a classic case of choosing between obstruction and construction. Which side are you on @realDonaldTrump ?
— Ricardo Rosselló (@Ricardo Rosselló) 1547211795.0

Twitter was inundated by other U.S. political leaders staunchly opposed to Trump's plan.

To even consider diverting funds from those suffering true humanitarian crisis — such as the devastated people of P… https://t.co/h88esmKlmp
— Andrew Cuomo (@Andrew Cuomo) 1547176666.0

They were joined by a chorus of empathetic Americans who refuse to allow their fellow citizens to suffer so Trump can keep his pride.

@ricardorossello @realDonaldTrump the US citizens of PR, who pay federal tax as I do, demand that we be provided th… https://t.co/bfxCkfd6ce
— DLasanta (@DLasanta) 1547224367.0

@MollyJongFast So...let’s take money from a disaster that actually happened and give it to the pretend disaster tha… https://t.co/X7aixQubLk
— Thomas Felton (@Thomas Felton) 1547175256.0

Since when was Puerto Rico supposed to pay for the wall? Some people think they know the answer.