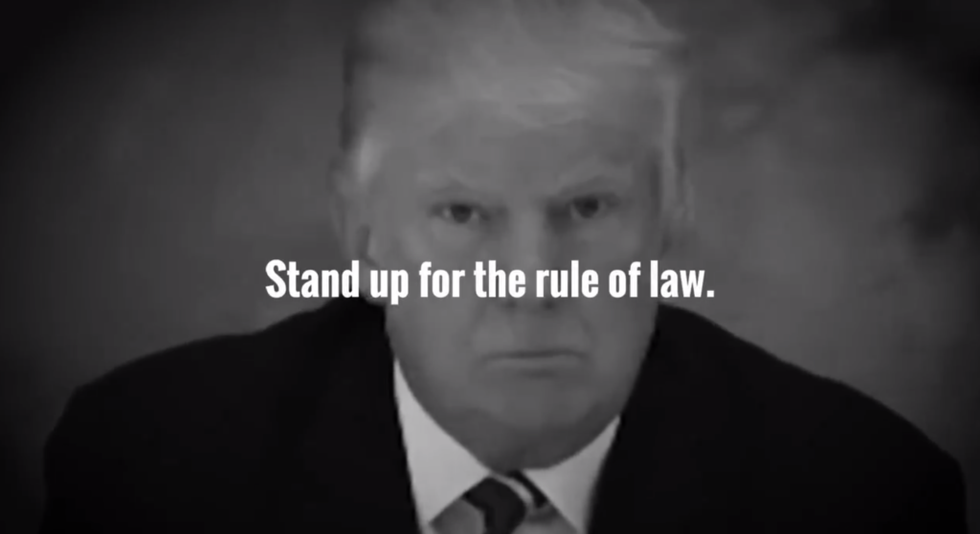 Screenshot, Republicans for the Rule of Law

A new ad from Republicans for the Rule of Law sends a powerful message to the GOP: "Your silence is deafening."

The soundless 30-second spot calls out Republican congressmen Benjamin Sasse, Lindsey Graham, Ted Cruz, John Kennedy, and Tim Scott for their silence in the wake of the Mueller report, saying "Our president attempted to obstruct justice. Stand up for the rule of law."

The Republican Rule of Law is a project from Defending Democracy Together, an advocacy organization "dedicated to defending America’s democratic norms, values, and institutions and fighting for consistent Conservative principles like rule of law, free trade, and expanding legal immigration." Bill Kristol, who debuted the Silence ad, is one of the organization's directors.

This isn't the first time the Republicans for the Rule of Law has posted a controversial ad. In November, they ran a "Protect Mueller" spot on the notoriously Trump-friendly Fox & Friends. Last week they purchased ad space on Fox & Friends to run a spot questioning Trump's hyperbolic "full exoneration" statements.

Republicans for the Rule of Law has purchased time for this ad on Fox and Friends Monday morning. I trust you, alon… https://t.co/6psYVnoDBL
— Bill Kristol (@Bill Kristol) 1555702482.0

The Republicans for the Rule of Law encourages people to read the Mueller report and be informed about the actual conclusions.

Reps. Sasse, Graham, Cruz, Kennedy, and Scott: what have you got to say? We're listening.