We Now Know How House Republicans Hope to Keep Control of Congress in November, but It Could Backfire 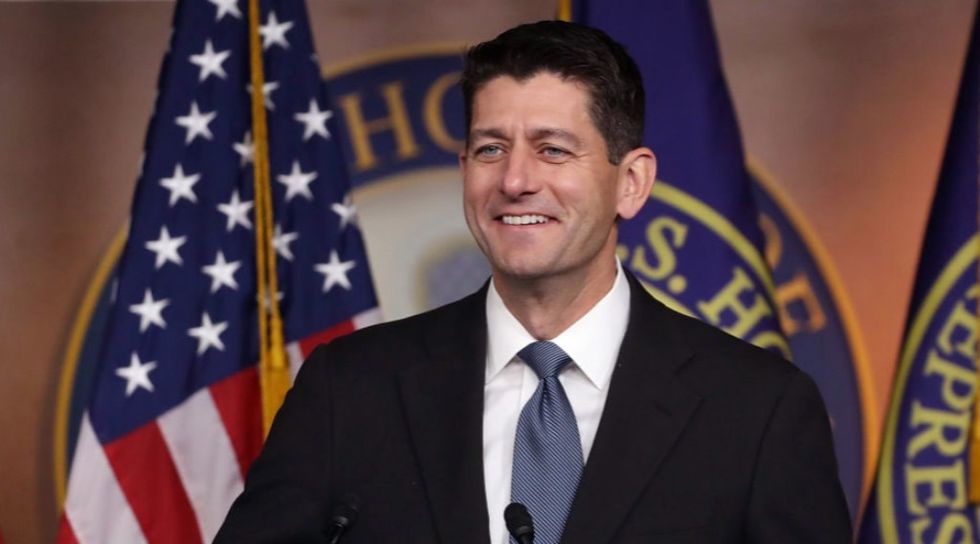 Republican Speaker of the House Paul Ryan (WI) speaks to the media during his weekly news conference at the U.S. Capitol on September 6, 2018 in Washington, DC. (Photo by Mark Wilson/Getty Images)

In January 2019, the United States House of Representatives gets a new House Speaker. A new Speaker of the House is a sure thing because the incumbent, Republican Paul Ryan of Wisconsin, announced his retirement. But before he goes, multimillionaire Ryan plans to propose a few more tax cuts.

In preparation for the 2018 midterm elections, House Republicans intend to announce further tax cuts aimed at bolstering the economy, or at least the finances of the wealthy and large corporations like their previous cuts.

Despite vows the prior GOP tax cuts would filter down and create more jobs and higher wages, workers saw little or no increases in wages while corporations saw increased profits created by using their tax breaks to buy back their own stocks rather than creating new jobs or increasing worker salaries and benefits.

The previous tax cuts also put the United States on track for record setting deficits. To combat the budget shortfalls created by their cuts for wealthy citizens and corporations, Republicans made or proposed cuts to veterans services, social security and medicare and other social safety net programs that serve the poorest citizens.

Despite their previous cuts earning the nickname "GOP tax scam" on social media, the Republican Party still sees pushing for further cuts to upper income and corporate taxes, the higher deficit and threatened cuts to veterans and social programs, as their best strategy headed into November's midterms.

They already began their social media push touting the benefits with the hashtag #BetterOffNow.

But does the GOP have the votes they need to push through more tax cuts?

They require 216 Representatives for approval, but with everyone in the House of Representatives up for reelection in November, some GOP members may be reluctant to tow the party line. Unlike the Senate with staggered six year terms of office resulting in only a third of the chamber being up for reelection each cycle, the House's two year terms means all 435 seats get put up for grabs every two years.

And that 100 percent turnover potential makes a difference.

That vulnerability makes members of the House more in tune with the current climate among their constituents every two years. And some Republicans from Democratic-leaning states are rightfully worried about lingering public opinion regarding their party's December tax cuts.

"Adding another several hundred billion dollars to the deficit is something that I think some Republicans are going to really think hard about. Passage is not automatic."

A dozen members of the GOP opposed their tax cuts in December. All but one came from Democratic leaning states New York, New Jersey and California. More Republicans are likely to bail on any new tax cuts if their job is on the line.

The proposal slated to be announced by the House intends to augment President Donald Trump's tax reform. That plan added $1.5 trillion to the federal deficit with permanent tax cuts for U.S. corporations—like those owned by the President and most of his administration and wealthier members of Congress—but made tax cuts for individual citizens expire after 2025.

The GOP campaign strategy involves pushing the narrative that the present economic highs benefit the middle class and workers and resulted directly from their December tax cuts. But the tactic suffers from a lack of proof.

It is difficult to convince people they are doing better when their wages stagnated but their bills increased or their job went away due to increased tariffs. Wall Street numbers fail to impress people living paycheck to paycheck, which is the majority of voters in many House districts.

Rank and file members of the GOP cannot afford to alienate their constituents so close to an election.

But the House Republicans Twitter account began a big push of their new slogan earlier this month. Touting "results over rhetoric," most of their posts received more negative comments than likes. Many of the respondents cited the GOP tax cuts and poor worker wages.

We’ve delivered results, not rhetoric, to everyday Americans who have been looking for solutions to the biggest pro… https://t.co/w33Fg0sFq5
— House Republicans (@House Republicans) 1536348120.0

@HouseGOP The results have not been "conservative" because the deficit is higher, and more children are separated f… https://t.co/myxgzL6bZy
— Robert M Jones (@Robert M Jones) 1536375008.0

@HouseGOP I can only assume this message is intended for your donors since you’ve delivered nothing but additional… https://t.co/yJD0rAwBCa
— Beth Riffe (@Beth Riffe) 1536414891.0

The Republican Party's newest round of tax cuts are expected to be announced this week. Midterm elections are slated for Tuesday, November 6, 2018.