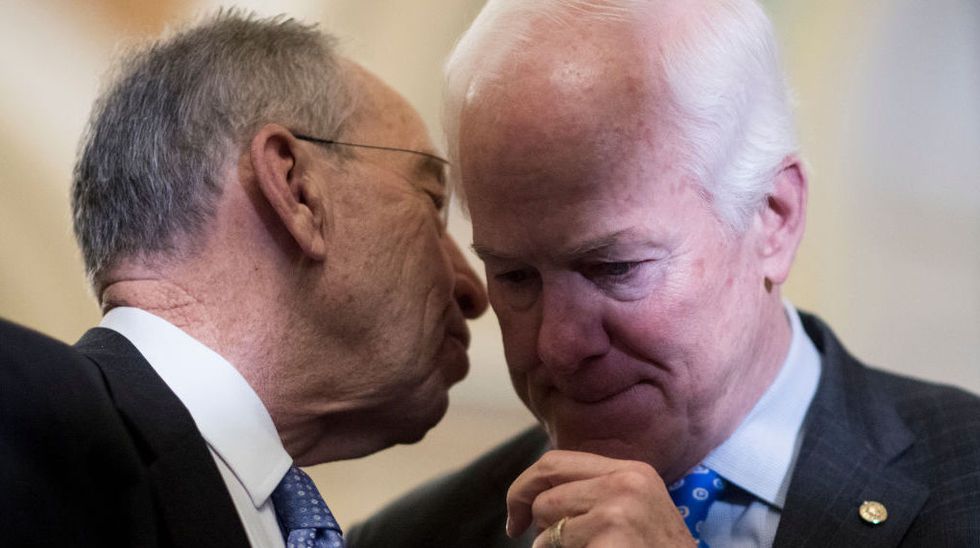 In an interview with PBS Newshour, Democratic Senator Richard Blumenthal spoke of a tipping point when it comes to sensible gun safety laws. It appears some of his Republican colleagues may have reached that point.

For decades, Republicans in Congress took a hands off approach to all gun legislation. As massacres of innocents mounted with ever more deadly weapons, they were not swayed.

After the Virginia Tech shooting in 2007 killed 32 people, they blocked limiting the size of ammunition magazines. After the 2012 massacre at Sandy Hook Elementary School took the lives of 20 children and 6 adults, Republican leaders blocked bipartisan legislation to expand background checks.

Last year after 49 people were murdered at Pulse nightclub in Orlando, they blocked legislation to stop gun sales to buyers on terrorism watch lists. Critics cite contributions to Republicans from the National Rifle Association as the root cause.

Because whores like @realDonaldTrump the @gop and @benshapiro have sold their souls to the NRA and the death cult.… https://t.co/8hhy8ZjKmY
— Keith Olbermann (@Keith Olbermann) 1507128505.0

But after Sunday's slaughter of 58 people in Las Vegas, Republicans may finally find the one gun industry product they're willing to negotiate legislation on: bump stocks. These gun conversion kits, legal to purchase in the Las Vegas gunman's home state, turn semiautomatic weapons into weapons capable of firing in long, deadly bursts.

On Wednesday, Texas Senator John Cornyn, the 2nd highest ranking Republican in the Senate, stated he asked Senator Charles E. Grassley of Iowa, the Judiciary Committee chairman, to convene a hearing on bump stocks and any other issues from the ongoing Las Vegas investigation.

I own a lot of guns, and as a hunter and sportsman, I think that’s our right as Americans, but I don’t understand the use of this bump stock. It seems like it’s an obvious area we ought to explore and see if it’s something Congress needs to act on.”

Republican Senators Lindsey Graham of South Carolina, Orrin G. Hatch of Utah and Marco Rubio of Florida, among others, said they would entertain legislation on bump stocks.

“We certainly want to learn more details on what occurred in Las Vegas,” Mr. Rubio said, “and if there are vulnerabilities in federal law that we should be addressing to prevent such attacks in the future, we would always be open to that.”

I think they should be banned. There’s no reason for a typical gun owner to own anything that converts a semiautomatic to something that behaves like an automatic.”

However none of the pronouncements guarantee action. The NRA, with tens of millions of dollars contributed to Republican campaigns, remains mum on the bump stock discussion. Their Twitter account has not posted since September 29.

Erich Pratt, executive director of another gun rights group, Gun Owners of America, promised to block any legislation. Will the NRA mirror their stance and will Republicans finally stand their ground on gun control legislation if they do?