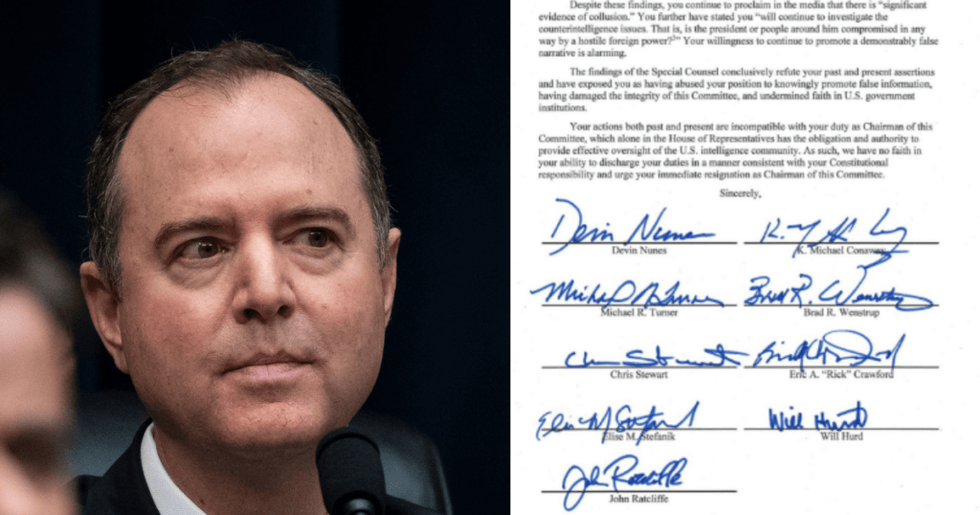 All nine Republicans on the House Intelligence Committee signed a letter on Thursday demanding the immediate resignation of their chair, Democrat Adam Schiff (CA).

Republicans are upset with Schiff for refusing to back down on his assertions that President Donald Trump's campaign had inappropriate communications with Russians during the 2016 campaign. Representative Mike Conaway (R-TX) read the letter aloud on the House floor after introducing it.

GOP Letter to Schiff by on Scribd

"Your willingness to continue to promote a demonstrably false narrative is alarming," Conaway said of Schiff. "The findings of the special counsel conclusively refute your past and present exertions, and have exposed you of having abused your position to knowingly promote false information."

This is not true, as the only publicly available take on the Trump-Russia matter has come from Attorney General William Barr, who in a memo to Congress on Monday said that Special Counsel Robert Mueller could not establish collusion or obstruction of justice.

Barr also noted that the special counsel's findings "do not exonerate Trump," though Republicans and the administration have lied about that too.

Nevertheless, Republicans have weaponized Barr's opinion and are out for blood.

"Your actions both past and present are incompatible with your duty as chairman of this committee. As such, we have no faith in your ability to discharge your duties in a manner consistent with your constitutional responsibility, and urge your immediate resignation as chairman of the committee."

Trump also said on Twitter that Schiff should be "forced to resign" and accused him - without evidence - of "knowingly and unlawfully lying and leaking."

Their effort has backfired - spectacularly. Reactions on Twitter have not been kind to the Republicans who signed that letter.

Schiff had his own powerful response to his Republican colleagues, who for nearly two years have mounted a concerted effort to prevent the truth about Trump and Russia - whatever it may be - from being revealed.

The facts are what they are.

"My colleagues may think it is OK that the Russians offered dirt on a Democratic candidate for president as part of what was described as the Russian government's attempt to help the Trump campaign. You might think that's OK," Schiff said. "My colleagues might think it's OK that when it was offered to the son of the president, who had a pivotal role in the campaign, that the president's son did not call the FBI, he did not adamantly refuse that foreign help. No, instead that son said that he would love the help of the Russians."

Schiff tore into the resignation and subsequent criminal probe of Trump's first national security advisor, Michael Flynn, who pleaded guilty to lying to federal investigators over his contacts with the Russians.

Schiff added that the only way to know for sure whether Trump acted inappropriately is to see Mueller's report.

"Now, I have always said whether this amounts to proof of conspiracy is another matter. Whether the special counsel could prove beyond a reasonable doubt the proof of that crime would be up to the special counsel, and I would accept his decision and I do."

House Speaker Nancy Pelosi (D-CA) rushed to Schiff's defense, saying she was "proud of the work" he has been doing while simultaneously thrashing the vengeful Republicans.

Republicans are on the wrong side of history.

@RepMarkMeadows All nine Republicans who signed the letter for Adam Schiff to resign, should resign themselves. Sha… https://t.co/OinjRiqbU1
— Marguerite Wilson (@Marguerite Wilson) 1553797272.0

@CongressmanHice That was AG Barr coverup letter NOT Mueller report. What are you hiding? Hats off to Adam Schiff &… https://t.co/KljKSCGXqZ
— Liberty Bell Rings (@Liberty Bell Rings) 1553795924.0

We deserve the truth.