We Now Know How Republicans Intend to Use Hillary Clinton's Words Against Democrats This Year, But They're Only Proving Her Point 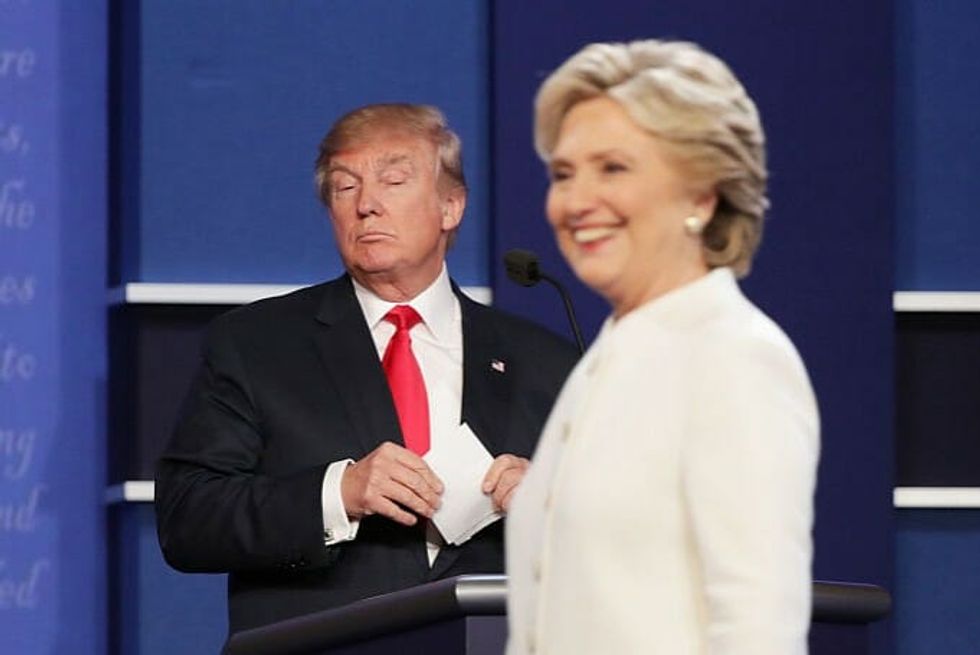 Democratic presidential nominee former Secretary of State Hillary Clinton walks off stage as Republican presidential nominee Donald Trump looks on during the third U.S. presidential debate at the Thomas & Mack Center on October 19, 2016 in Las Vegas, Nevada. Tonight is the final debate ahead of Election Day on November 8. (Photo by Chip Somodevilla/Getty Images)

For the upcoming midterm elections, at least 3 Republican candidates or groups released ads slamming Hillary Clinton. It is a compelling strategy heading toward November since Clinton is not on any ballot.

Can lingering hatred for Clinton still garner votes? The GOP hopes so.

It is not a new strategy. The Republican Party targeted Secretary Clinton while her husband was president and never really stopped.

GOP attack ads blast Clinton as an out-of-touch elitist, Fox News prime time reports about Clinton investigations, and President Donald Trump's 2020 presidential campaign rallies still feature "lock her up!" chants.  It is a rehash of 2016 that proved effective then.

But how will undecided voters respond to ads featuring a non-candidate that currently holds no public office? Clinton is a private citizen.

A new TV spot for Representative Evan Jenkins of West Virginia, a Republican hoping to challenge Democratic Senator Joe Manchin, opens with an excerpt from a speech Secretary Clinton made in Mumbai, India. Clinton was a guest speaker at India Today Conclave 2018.

Clinton recalled her loss in the 2016 US presidential election, characterizing her supporters as "optimistic, diverse, dynamic, moving forward" while Trump's wanted to move "backwards."

Like her "basket of deplorables" remark, the line was guaranteed to resonate in West Virginia, which Trump won by more than 40 points. During the 2016 campaign, Clinton stated, "You can put half of Trump supporters into what I call the basket of deplorables."

Just as in the 2016 presidential election, when Trump's campaign jumped on the deplorables remark, the GOP has leapt onto the "backwards" characterization. But will conservative voters still respond when Clinton is not running for any public office or speaking on behalf of the Democratic Party?

Republican Attorney General Josh Hawley, running against Missouri Democratic Senator Claire McCaskill, created an ad showing a long clip of Clinton's "backwards" comments before stating, "This is what Claire McCaskill and her 'president' think of you."

Several state-specific ads from the GOP's Senate campaign committee tie Senate Democratic incumbents to Clinton by virtue of her earning the presidential nomination.

Rick Wilson, a Republican strategist and ad-maker, said the GOP's shifting the focus back to Clinton "lets Republicans and Donald Trump pretend like the 2016 campaign is still going on."

Will their nostalgia pay off at the ballot box though? Or will the inability to strategize beyond attacking a candidate from 2 years ago backfire with voters looking for concrete messages from candidates?

The throw-back message reflects a lack of effective new ones in what promises to be a tough year for Republicans, according to Democratic campaign officials.

Democratic Senator Joe Donnelly of Indiana, up for reelection in a state that voted Trump in 2016, said the midterms weren't about "rehashing the tired political arguments of past elections."

However, with certain segments of the population, attacking Clinton daily never ended after 2016. Fox News devotes roughly equal time to Trump and Clinton, according to a Media Matters analysis, despite one being a private citizen and the other president of the United States.

It is too early to gauge the effectiveness of the GOP resurrected strategy of attacking Hillary Clinton. But both the Republican and Democratic parties are certain to be watching closely.