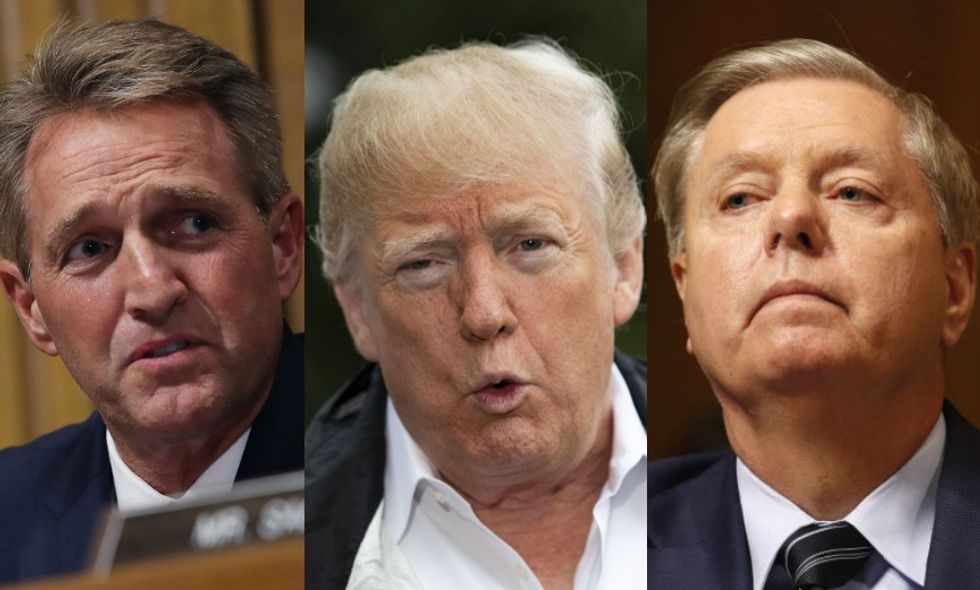 Though Republican officials usually fall in lockstep with President Donald Trump, there have been some occasions that even they couldn't feasibly defend the President, like when he took up for Nazis marching in Charlottesville or when he publicly sided with Russian President Vladimir Putin over his own intelligence officials.

Most recently, they now appear to be breaking from Trump's opinion on the brutal murder of Washington Post writer Jamal Khashoggi—a murder the Central Intelligence Agency concludes was performed under orders from Saudi Crown Prince Mohammad Bin Salman Al Saud, whom Khashoggi reported on unfavorably.

Republican rebukes come in reaction to the President's recent statement in which he doubts that Al Saud is to blame, cites Saudi Arabia's allyship, and acknowledges that Saudi Arabia's oil contributions played a factor in his decision.

"King Salman and Crown Prince Mohammad bin Salman vigorously deny any knowledge of the planning or execution of the murder of Mr. Khashoggi. Our intelligence agencies continue to assess all information, but it could very well be that the Crown Prince had knowledge of this tragic event – maybe he did and maybe he didn't!...After the United States, Saudi Arabia is the largest oil producing nation in the world. They have worked closely with us and have been very responsive to my requests to keeping oil prices at reasonable levels – so important for the world. As President of the United States I intend to ensure that, in a very dangerous world, America is pursuing its national interests and vigorously contesting countries that wish to do us harm. Very simply it is called America First!"

I never thought I’d see the day a White House would moonlight as a public relations firm for the Crown Prince of Sa… https://t.co/kiqJXXZnAB
— Senator Bob Corker (@Senator Bob Corker) 1542752287.0

Our foreign policy must be about promoting our national interests. It is in our natl interest to defend human rig… https://t.co/ZTPZ81FYWM
— Marco Rubio (@Marco Rubio) 1542744729.0

The President indicates that Saudi Arabia is the lesser two evils compared to Iran and so the U.S. won't punish Sau… https://t.co/YyjCUAIrCe
— Rand Paul (@Rand Paul) 1542752858.0

“I’m pretty sure this statement is Saudi Arabia First, not America First. I’m also pretty sure John Bolton wrote it."

Even one of the President's most steadfast allies in the senate—Lindsey Graham (R-SC) disparaged the statement—albeit not without blaming former President Barack Obama first.

Likewise, it is not in our national security interests to look the other way when it comes to the brutal murder of Mr. Jamal #Khashoggi.
— Lindsey Graham (@Lindsey Graham) 1542750812.0

While Saudi Arabia is a strategic ally, the behavior of the Crown Prince – in multiple ways – has shown disrespect… https://t.co/wtbR4Si8wu
— Lindsey Graham (@Lindsey Graham) 1542750862.0

I fully realize we have to deal with bad actors and imperfect situations on the international stage. However, wh… https://t.co/bFS2Nwh3Vb
— Lindsey Graham (@Lindsey Graham) 1542750903.0

So if even many of the most Right Wing Republican Senators are outraged over Trump's statement on Khashoggi, why on earth would the President make it then?

To start, Trump has had numerous business dealings with Saudi Arabia, selling everything from a floor of his building to one of his yachts to rich Saudi businessmen.

"Saudi Arabia, I get along with all of them. They buy apartments from me. They spend $40 million, $50 million...Am I supposed to dislike them? I like them very much."

"I make a lot of money from them. They buy all sorts of my stuff. All kinds of toys from Trump. They pay me millions and hundred of millions."

In addition, Trump is meeting with global leaders at a Saudi-led conference on global oil policy in two weeks.

Americans have noticed and now, they're calling him out.

In order to protect his own personal business dealings with the kingdom, Trump affirmed his support for the Saudi c… https://t.co/eJGhqJIsWx
— Jon Cooper 🇺🇸 (@Jon Cooper 🇺🇸) 1542743254.0

Our Founders knew that allowing ANY President to accept foreign government gifts would invite corruption, such as S… https://t.co/HmluV3tcCA
— Tammy Duckworth (@Tammy Duckworth) 1542751334.0

Judging from past behavior, it's hardly likely that Trump's defense of the Saudi Crown Prince will be the straw that breaks the backs of Republican lawmakers. Nonetheless, their reactions show just how indefensible the President's latest atrocity really is.