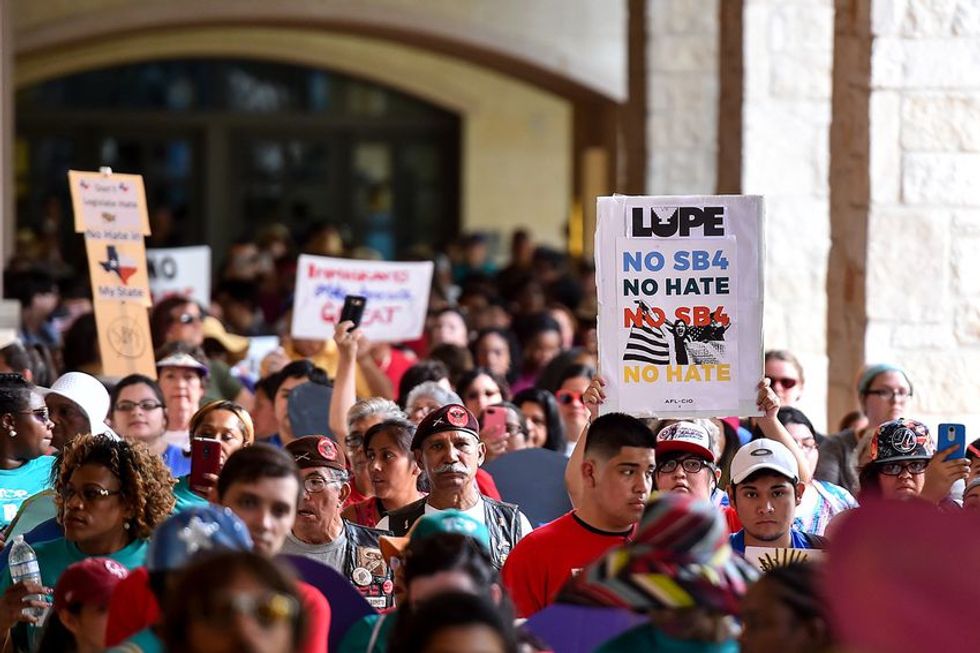 A federal judge has blocked Texas from enforcing SB4, its ban on so-called sanctuary cities, in a victory for civil rights groups and Democratic leaders who oppose the legislation. Although the judge’s ruling is only temporary, it prevents the law from taking effect on Friday as a suit against it proceeds. Five of the six largest cities in Texas––Houston, Dallas, San Antonio, Austin and El Paso––have joined the lawsuit.

The law would have given local law enforcement the authority to ask about a person's immigration status during routine stops. It also would threaten local officials with fines and misdemeanors if they do not comply with requests from federal immigration authorities to detain anyone suspected of being in the country illegally.

In his 94-page ruling, Chief U.S. District Judge Orlando Garcia said the plaintiffs were likely to succeed with the argument that the law would encourage racial profiling and violate the First and Fourth Amendments when the case goes to trial.

“The government may disagree with certain viewpoints, but they cannot ban them just because they are inconsistent with the view that the government seeks to promote,” Judge Garcia wrote. He added, “SB 4 clearly targets and seeks to punish speakers based on their viewpoint on local immigration enforcement policy" and that SB 4 would "erode public trust and many communities less safe."

"The court was right to strike down virtually all of this patently unconstitutional law. Senate Bill 4 would have led to rampant discrimination and made communities less safe," Gelernt said. That's why police chiefs and mayors themselves were among its harshest critics — they recognized it would harm, not help, their communities."

Texas Attorney General Ken Paxton appeared unfazed by the setback and vowed to appeal the ruling in a statement.

"Senate Bill 4 was passed by the Texas Legislature to set a statewide policy of cooperation with federal immigration authorities enforcing our nation's immigration laws. Texas has the sovereign authority and responsibility to protect the safety and welfare of its citizens. We're confident SB 4 will ultimately be upheld as constitutional and lawful," said Paxton.