We Now Know How Much Money Companies Have Brought Back to the US After Trump's Tax Law, and It's a Fraction of What Trump Promised

A promise not kept. 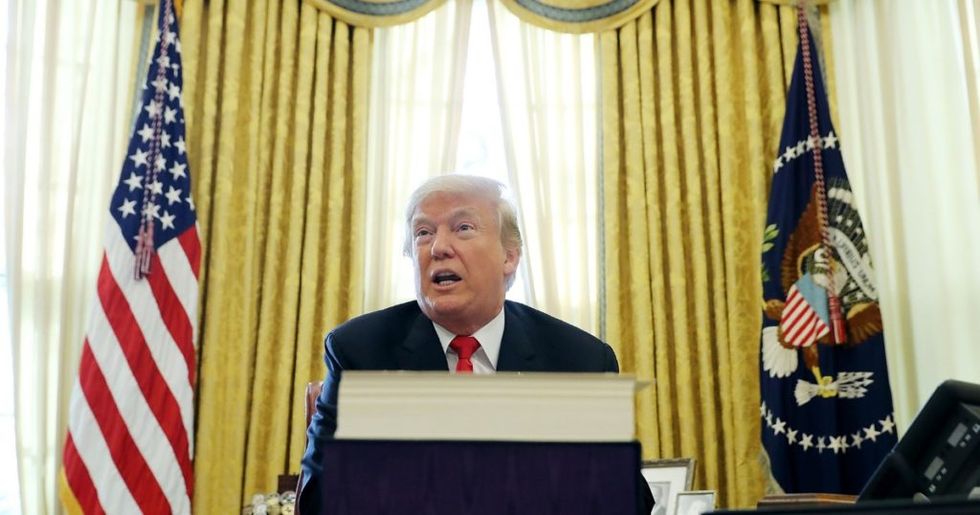 Last year, President Donald Trump promised that his plan to slash corporate taxes would result in trillions of dollars flowing back into the United States. Only a fraction of that money has been repatriated.

"We expect to have in excess of $4 trillion brought back very shortly," Trump told executives in 2017 while trying to sell his tax overhaul. "Over $4 [trillion], but close to $5 trillion, will be brought back into our country," Trump added. "This is money that would never, ever be seen again by the workers and the people of our country."

The Wall Street Journal reported on Sunday that despite Trump's pledge that trillions of offshore dollars would flow back into the United States, corporations "have repatriated about $143 billion so far this year" out of the roughly $2.7 trillion in profits sitting in foreign bank accounts. This is based on "securities filings from 108 publicly traded companies."

Remember those trillions in corporate profits stashed abroad? Some are coming back, but not all at once. And some a… https://t.co/cii1q883iW
— Richard Rubin (@Richard Rubin) 1537117329.0

The Commerce Department estimates that $305.6 billion has been repatriated in Q1 2018, which is more than 2016 and 2017 combined (the Commerce Department has access to private financial data). Of this, however, "more than $35 billion... reflects funds routinely repatriated on a quarterly basis before the tax overhaul." New data is scheduled for release on September 19.

Furthermore, two-thirds of that $143 billion came from just two companies - communications behemoth Cisco and the pharmaceutical manufacturer Gilead, the Journal found. An additional $37 billion has been promised by other companies.

Although the Tax Cuts and Jobs Act did mandate a one-time tax on overseas profits corporations have already earned, "whether or not money is repatriated," the law "removes federal taxes on subsequent repatriations and makes future foreign profits generally free from U.S. taxes," the WSJ noted.

"The corporations are allowed a tax credit against U.S. taxes for taxes paid to foreign jurisdictions," says a provision in Trump's tax law. "This subtitle establishes a territorial system in which foreign source income is not subject to regular U.S. taxes."

Because of this, many companies "have said they don’t need past foreign earnings in the U.S. or have no immediate plans to bring cash home," the WSJ wrote.

Trump's claims that repatriated corporate cash would be used to create jobs has also been largely discredited. Cisco, for example, "plans to repurchase $25 billion in shares over two years," the Journal said. "It has spent $14.5 billion on buybacks through July."

It's not that offshore cash repatriation is less than Trump expected. It's that most of that cash is used for buyba… https://t.co/QGvL4abReE
— zerohedge (@zerohedge) 1537192359.0

Various analyses have shown that 40-60 percent of tax savings are used for stock buybacks, rather than in investments in, say, higher wages, which companies love to say they can't afford. This practice was illegal in the United States until President Ronald Reagan lifted those regulations.

The White House is urging patience with U.S. companies as they mosey through the process of bringing their profits back into the American economy.

"There are reasons to expect that pace to remain strong, as large-scale corporate financial decisions like this aren’t made overnight," Walters added. "As a businessman, the president understands that."

It's NOT Just Crowd Size - He Screws Up The Numbers On EVERYTHING. Trump Tax Law Has Led to Repatriation of Just 3… https://t.co/Mup3OLTCag
— Allan Margolin (@Allan Margolin) 1537187059.0

It appears that workers shouldn't expect to see a share of repatriated corporate money any time soon.