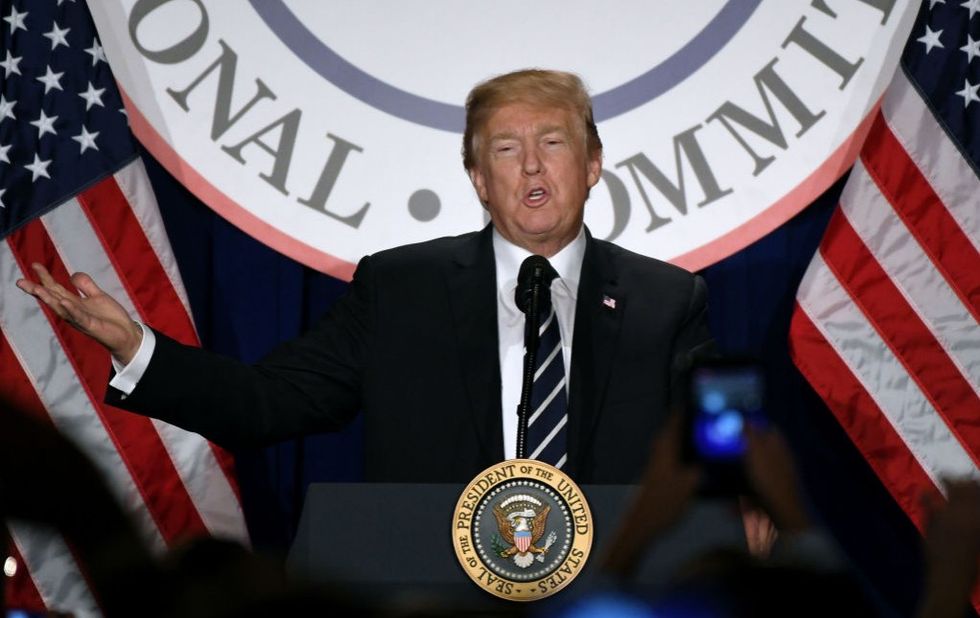 During the 2016 presidential campaign, President Donald Trump vowed his business holdings would be a non-issue because he would remove himself from all day to day operations and put the businesses in a "blind trust" to be run solely by his sons.

While that is not how a blind trust works, the vow never came to fruition post-election anyway, particularly as it pertains to the Trump International Hotel in Washington, D.C., which Trump still has ownership of.

Now seven religious and civic leaders in Washington DC plan to use Trump's decision to remain heavily involved in his private businesses, and his moral character, against him.

ANC 4C voted unanimously to support the petition and forwarded the petition to the District of Columbia Alcohol Beverage Control Board, who provides oversight for liquor licenses. According to Zach Teutsch, a commissioner in ANC 4C,

We would be taking a similar action towards any high-profile community member that has a long, detailed public history of dishonesty, civil and criminal accusations."

The seven DC spiritual and civic leaders cited a provision of the liquor licensing laws covering Washington DC which states the license holder must be of "good moral character." The President, their petition states, falls far short in that regard.

Donald Trump, the true and actual owner of the Trump International Hotel, is not a person of good character."

And they provided examples.

The petitioners state Trump being accused of sexual assault by 16 women, his charitable foundation facing allegations of impropriety in the state of New York, his failure to pay his debts to lenders and contractors, his association with alleged and convicted criminals, his attitudes toward minority groups and women and his overall race relations mean he falls far short of the "legal good character standard".

They maintain his behavior before and during and after the election reflect a lack of integrity. They also cited a dismal public track record with honesty.

As examples of his lack of honesty, the petition cited the President's changing and contradictory accounts of the payment made to Stephanie Clifford by his lawyer Michael Cohen.

As a symbol of his integrity, they referenced the fraud case against Trump University, which was eventually settled for $25 million. The petition states,

Trump, who might have tried to distance himself from the tactics alleged in the suits, instead repeatedly denied the fraud claims and consistently insisted that he would win the case at trial."

They conclude their petition by stating it is in the public interest to revoke the liquor license issued to President Donald Trump because because there are "no conditions" that would assure D.C. residents that "Mr. Trump, a person who lacks good character, will suddenly become a person of good character."

The District of Columbia Alcohol Beverage Control Board may eventually agree. Former board member Mafara Hobson sided with the petitioners and urged “an immediate investigation and subsequent hearing to determine if the hotel is in compliance and worthy of the privilege to hold a liquor license in the nation’s capital.”

The board began their investigation and has 90 days to issue a decision from the date ANC4C forwarded their concurrence.

The Trump Organization owned DC hotel knows its share of controversy. And those who wish to engage the President use it for official gatherings, like the the Republican National Committee winter meeting held there in February 2018, as well as international leaders and lobbyists.

The Attorneys General of Washington DC and Maryland, together with Citizens for Responsibility and Ethics in Washington (CREW) also took issue with Trump's continued involvement with the same DC hotel, but for a different reason. They pursued their grievance in federal court.