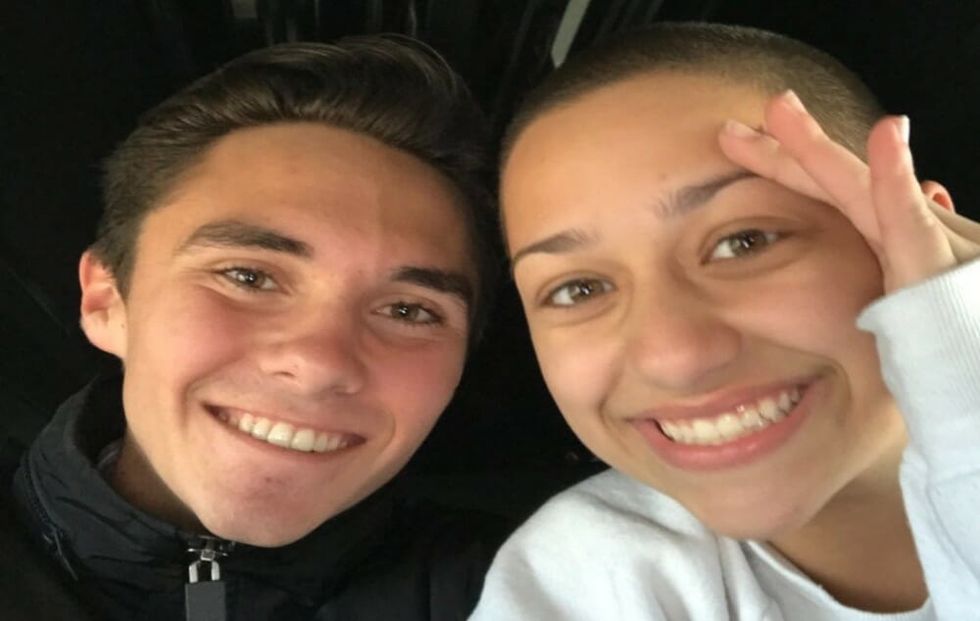 David Hogg and Emma Gonzalez take a moment to be High School seniors and teenagers with a selfie. (@davidhogg111/Twitter)

Gun rights advocates, in an attempt to maintain the status quo at any cost, repeatedly target those  they see as threats to guns. One of their favorite current targets is a 17 year old survivor of the mass shooting at Marjory Stoneman Douglas High School, David Hogg.

Using altered images and easily disproved claims, gun rights proponents and alt-right media outlets, and even a few members of Congress, attempt to discredit the children from Marjory Stoneman Douglas High School. A quick search of Twitter or Facebook shows 17 year old David Hogg as one of the top two targets for their attacks.

A student journalist, the 17 year old senior at the Parkland, Florida, school first gained notoriety for videoing interviews with his classmates during the shooting. Huddled together in a closet during the shooting, students began to call family members.

"That's kind of around the same time that I just had to pull out my phone," Hogg said in an interview shortly after the shooting. "It was sheer terror," he added, but as an aspiring journalist he felt the moment needed to be documented so the world could see what happens to children during these mass shootings.

The school shooting at Stoneman Douglas was the 18th of 2018, the 8th where someone other than the gunman was injured. 9 more school shootings have occurred since the Parkland tragedy where 17 people were murdered.

Since the shooting, students from the school organized calls for gun reform, including a student walkout on the 1 month anniversary of the Parkland shooting and the March for Our Lives on March 24. Their call for stricter gun regulations put them in the cross-hairs of the gun rights advocates, like the National Rifle Association (NRA).

Red State, who bills their online media as "the latest conservative news", started another attack against the 17 year old Hogg on Monday night. Red State writer Sarah Rumpf posted an article claiming Hogg was not at the school during the shooting. She cited a CBS documentary as the basis of her claim.

Rumpf quoted an out of context excerpt from the CBS documentary on the Parkland shooting. In the full footage, David Hogg describes biking back to the school on the day of the shooting to interview people and get their reactions.

But the Red State writer claimed this indicated Hogg was not at school during the shooting.

"It is not possible for him to have been in class and also have been at home, a three-mile bike ride away from campus," Rumpf wrote. "One of those stories is a lie. Hogg should explain himself, and quickly."

What did happen quickly was the dismantling of Rumpf's false claims.

Red State corrected the article by lining through all errors, almost all of the article's content, while leaving it available to view. However, rather than taking responsibility for the false story, it blames the CBS documentary it misquoted. According to Red State, the documentary was too difficult for Sarah Rumpf to understand hence her false claims.

I am sorry for the error. I have updated the post but left the original text in strikethrough for transparency's sa… https://t.co/Ge68XyegHk
— Sarah Rumpf (@Sarah Rumpf) 1522113342.0

A new headline for the article says: "UPDATE: CBS Video Confusing. Hogg Was On Campus." While no official statement about the future of Rumpf contributing to Red State appears on their site, Rumpf's contributor bio has been deleted from Red State.

But this Red State retraction failed to reach readers or alt-right sites like InfoWars. Social media is still full of posts citing the false claims against the 17 year old.

But Kurt Eichenwald points out these are the posts of adults attacking children because the children are a perceived threat to the adult's guns.