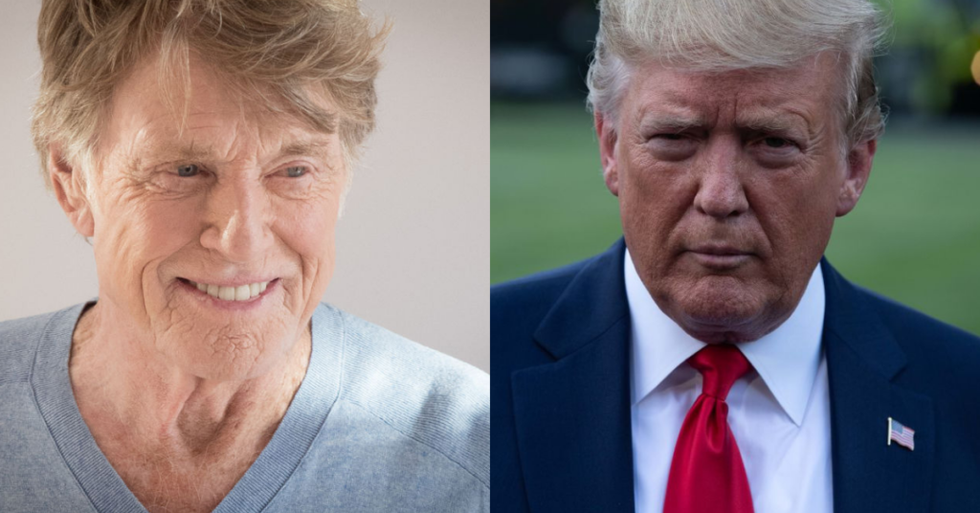 People remark often on the admiration President Donald Trump reserves for dictators and authoritarians. But increasingly people are pointing out the words and actions of the POTUS that borrow from the playbook of totalitarian regimes.

Hollywood actor and director Robert Redford penned an Op-Ed titled "President Trump's dictator-like administration is attacking the values America holds dear" and subtitled "This monarchy in disguise has been so exhausting and chaotic, it’s not in the least bit surprising so many citizens are disillusioned." for NBC News addressing just that topic.

"We’re up against a crisis I never thought I’d see in my lifetime: a dictator-like attack by President Donald Trump on everything this country stands for."

The Academy award-winning director referenced the impeachment hearings. He came to a very definite conclusion regarding both the President and those who enable him.

"It’s time for Trump to go—along with those in Congress who have chosen party loyalty over their oath to 'solemnly affirm' their support for the Constitution of the United States. And it’s up to us to make that happen, through the power of our votes."

Redford, 83, reflected on the United States he grew up in.

"Tonight it pains me to watch what is happening to our country. Growing up as a child during World War II, I watched a united America defend itself against the threat of fascism."

"I watched this again, during the Watergate crisis, when our democracy was threatened. And again, when terrorists turned our world upside down."

"During those times of crises, Congress came together, and our leaders came together. Politicians from both sides rose to defend our founding principles and the values that make us a global leader and a philosophical beacon of hope for all those seeking their own freedoms."

He then offered a warning...

"We’re at a point in time where I reluctantly believe that we have much to lose — it is a critical and unforgiving moment. This monarchy in disguise has been so exhausting and chaotic, it’s not in the least bit surprising so many citizens are disillusioned."

"Let’s rededicate ourselves to voting for truth, character and integrity in our representatives (no matter which side we’re on). Let’s go back to being the leader the world so desperately needs. Let’s return, quickly, to being simply ... Americans."

Reactions to Redford's views were mixed.

@THR Who cares about this hasbeen. Before any of these Hollywood types . Question the effective abilities of any gi… https://t.co/0vyJdQdyhj
— Greg Silva (@Greg Silva) 1574825787.0

@THR Too bad Robert Redford has Democratic Distortion Disease. I liked him in movies, but his political view is way… https://t.co/IMR1aAaAKL
— Teresa G-Dei (@Teresa G-Dei) 1574811487.0

While Redford called for unification and an end for divisiveness from both sides, the polarization of the comments on his Op-Ed indicate it may be some time if that is ever achieved.