Turkish President Slams Trump's Letter for 'Lack of Respect' and People Are Pretty Sure He Just Threatened the U.S. 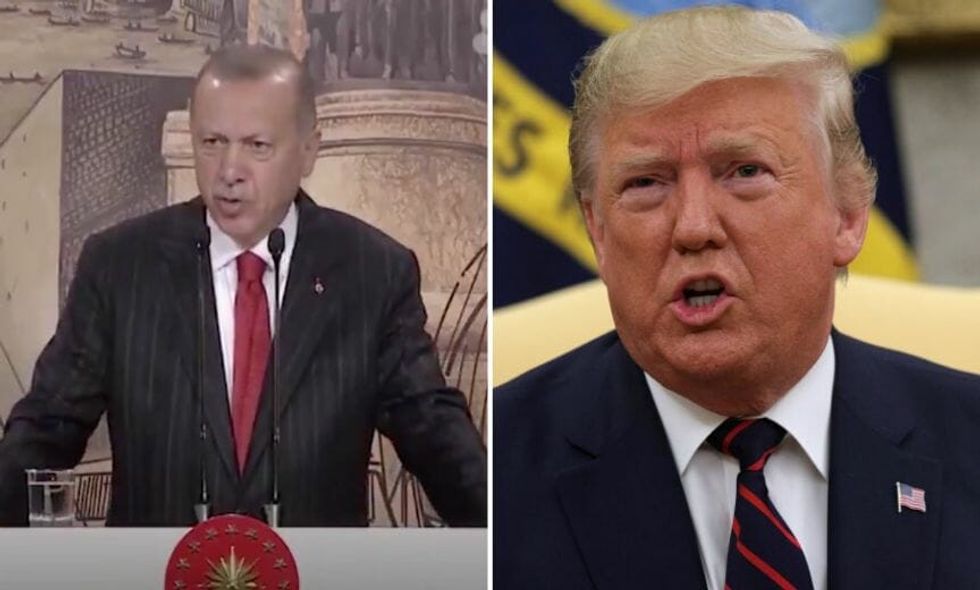 Earlier this month, President Donald Trump announced an abrupt withdrawal of U.S. Special Forces from Northern Syria, abandoning Kurdish allies who were crucial in the containment of ISIS. The withdrawal left Kurds in the region vulnerable to an all-but-certain attack from neighboring Turkey—an attack which occurred immediately after the announcement of withdrawal.

President Donald Trump subsequently sent a bizarre letter to Turkish President Recep Tayyip Erdogan threatening to destroy the Turkish economy if Erdogan didn't make a "good deal" with the United States and threatened that history would forever look upon him as "the devil" if "good things don't happen."

It was later announced that Vice President Mike Pence and Secretary of State had reached a deal with Erdogan for a 120 hour ceasefire giving time for Kurds to evacuate their homeland. Trump soon took credit for negotiating a pause in a conflict he was instrumental in starting.

Though Erdogan initially dismissed the letter, he addressed it during a press conference regarding the ceasefire.

Erdogan said the letter "did not go hand in hand with political and diplomatic courtesy" expected from the United States.

"Of course we haven't forgotten [the letter]. It would not be right for us to forget it...We would like for it to be known that we will do what is necessary when the time comes."

Americans were concerned that Erdogan's words amounted to a threat.

@BBCJonSopel @realDonaldTrump So now we’re being threatened by petulant dictators due to Trump’s idiocy? So much winning.
— Jamie Hall (@Jamie Hall) 1571412097.0

@BBCJonSopel @realDonaldTrump Hae @GOP @HouseGOP This sounds like Erdogan is threatening the US to me. This pres… https://t.co/YYnefs9K9T
— Reality Hits! 🇨🇦 (@Reality Hits! 🇨🇦) 1571419904.0

@BBCJonSopel @realDonaldTrump You gotta love how our Turkey can noe threaten the US. Make Autocrats Great Again.
— Patriautism (@Patriautism) 1571417493.0

But it was Trump's so-called leadership and his childish letter that they blamed.

Kurds in Syria are paying large sums of money for smugglers to help them get out of the region before the ceasefire ends and Turkish aggression resumes.

Erdogan is set to visit the White House next month, but many are calling on Trump to cancel it.