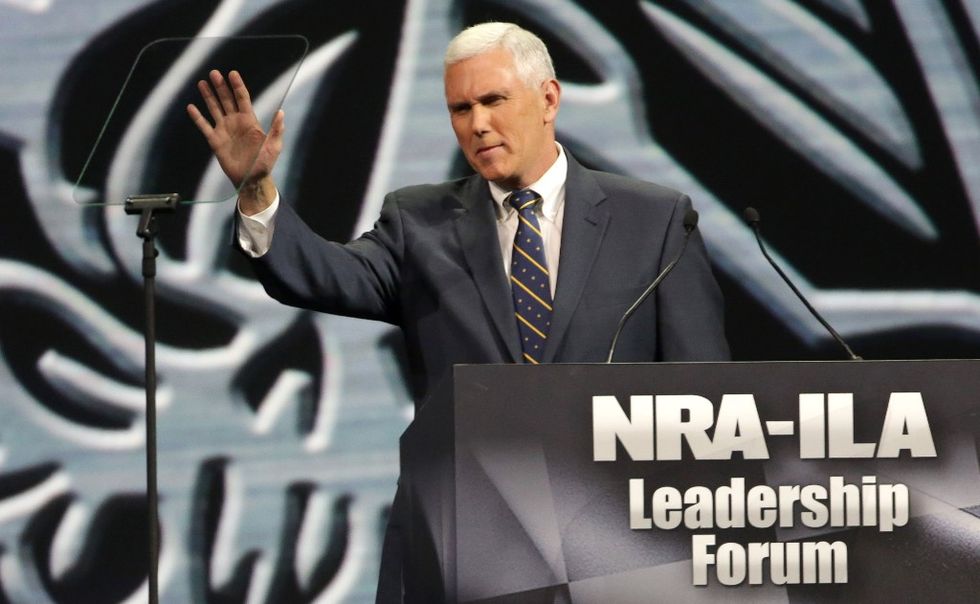 The National Rifle Association (NRA) has a convention in Dallas over the coming weekend, May 3-6, but there is one thing convention goers are being told to leave at home: their guns. Vice President Mike Pence, a staunch gun advocate, is slated to appear on Friday at the convention.

The NRA issued guidance to all attendees that all "firearms and firearm accessories, knives or weapons of any kind" are forbidden from the convention due to the Vice President's attendance.

But some people are calling out their gun ban as a double standard. After every mass shooting, the NRA advocates the "good guy with a gun" as the best way to handle any mass shooting situation.

The theory states that an armed population is always safer than an unarmed one. After the mass shooting at Marjory Stoneman Douglas High School in Parkland, Florida that killed 17 people, the NRA and the Trump-Pence White House proposed arming teachers as the best solution to school shootings.

So why would guns be a problem at their own convention to protect the Vice President? If Pence's security and safety were a concern, should the NRA not advocate all NRA members, their good guys with guns, bring their guns?

Plenty of people came to the same logical conclusion based on the NRA's previous statements, including survivors of that Parkland shooting.

Posting the NRA website notice, Parkland survivor turned gun control advocate Cameron Kasky called the organization out on Twitter, stating "The NRA has evolved into such a hilarious parody of itself."

Fred Guttenberg, who lost his 14 year old daughter in the Parkland shooting, also took exception to the White House and NRA stance on more guns as an answer for school safety, but not for themselves.

On so many levels, this is enlightening. According to the NRA, we should want everyone to have weapons when we are… https://t.co/Ighhr8D3v4
— Fred Guttenberg (@Fred Guttenberg) 1524926378.0

Matt Deitsch, a 2016 graduate of Stoneman Douglas, gun control advocate and filmmaker, responded to Kasky's Tweet with his own criticism of the NRA.

The official reason for the gun ban comes down to Secret Service policies, which the NRA deferred to in their gun ban. But some are saying if the Vice President required all guns be disallowed, the NRA should not invite him to their convention in defense of gun rights and the 2nd Amendment.

The NRA actively opposes all new gun regulations through their lobbying and donations to candidates. To back down on the rights of their own members at their own convention is a problematic stance to take.

As expected, plenty of people were willing to call out the NRA on this perceived double standard.