Fox Business Host Had to Delete His Tweet Spreading a Rightwing Conspiracy Theory About the Pipe Bombs, But His Replacement Tweet Was No Better 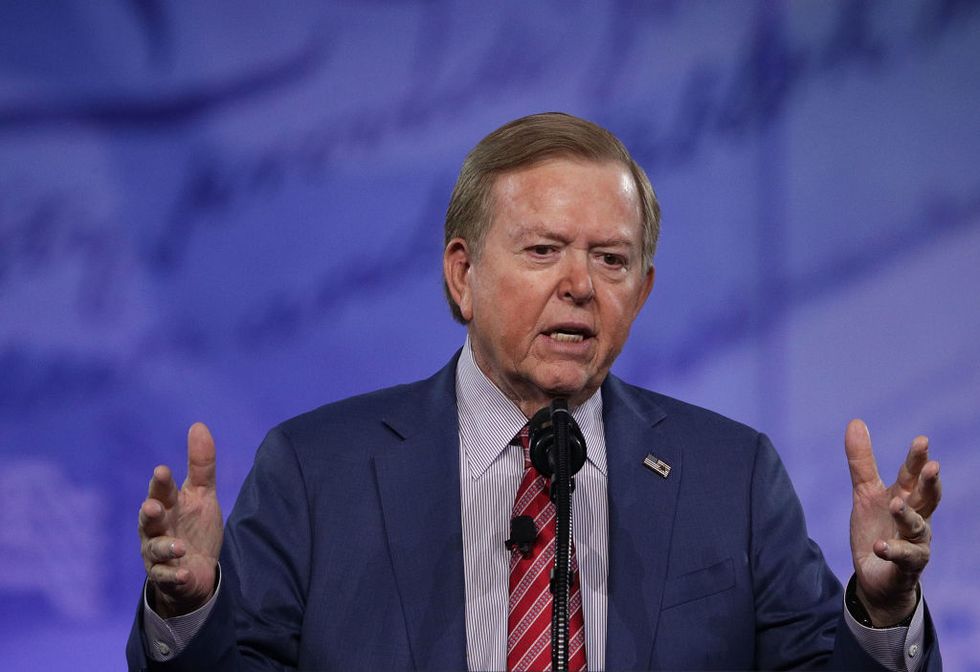 Fox Business Network host Lou Dobbs called the bombs and suspicious packages that were mailed to prominent Democrats and the offices of CNN this week "fake news."

The tweet was widely condemned and Dobbs deleted it––but not before it was captured in screenshots.

Dobbs then posted a second tweet suggesting that the bombs and suspicious packages were designed to change "the narrative from the onslaught of illegal immigrants and broken border security." He deleted that tweet soon afterward, but––again––not before it was screenshotted.

Dobbs has now posted this tweet, after deleting his previous tweet in which he called the explosive devices mailed… https://t.co/gNv9zvhoMU
— Oliver Darcy (@Oliver Darcy) 1540478659.0

It's still unclear if Dobbs will face any disciplinary action for his tweets. A Fox Business Network spokesperson said that Dobbs "clarified his sentiment" in a new tweet posted to his account (which he has not deleted):

The Fox Business Network spokesperson has not yet responded to requests for elaboration. But at Fox News, the sister channel to Fox Business Network, a senior employee told CNN Business that people like Dobbs "[who] really ruin it for all the hard working journalists at Fox."

Dobbs's incendiary tweets follow a tense last 24 hours which began when a bomb was found on the suburban property owned by Bill and Hillary Clinton. An explosive device was also sent to former President Barack Obama and his wife, former First Lady Michelle Obama. The Secret Service said Obama and Clinton “did not receive the packages nor were they at risk of receiving them.”

Later, CNN’s headquarters at the Time Warner Center in New York received a package addressed to former CIA Director John Brennan, himself a noted Trump critic. The building was evacuated.

This is a photograph of the suspicious package sent to the CNN building in New York City earlier this morning. Poli… https://t.co/edo4JqHRns
— CNN Breaking News (@CNN Breaking News) 1540401325.0

These developments unfolded rather rapidly. Soon after, a report surfaced that Representative Debbie Wasserman Schultz also received a package because her office was listed as the return address on a package sent to Eric Holder, the former attorney general. A package sent to California Democratic Representative Maxine Waters was also intercepted, according to ABC.

A suspicious package was also intercepted at the offices of the San Diego Union-Tribune, which is near the field office of Senator Kamala Harris, a California Democrat. The San Diego police department closed the downtown area in response; the package contained miscellaneous items––including shoes and children’s books––and law enforcement allowed business to resume as usual. A package sent to the office of New York Governor Andrew Cuomo was found to contain only a thumb drive.

Dobbs has used his high profile to push conspiracy theories––and he has long been held in regard by President Donald Trump, who has quoted Dobbs's remarks on immigration to rile up his base.

In August, the president left many on social media perplexed after he tweeted a quote from Dobbs which claimed he “has done more for minority groups in this country than any president in decades.”

“President Trump has done more for minority groups in this country than any president in decades.” @LouDobbs
— Donald J. Trump (@Donald J. Trump) 1535450072.0

That Trump, whose history of racial animus is well documented, tweeted a comment from Dobbs is rather suspect. Dobbs has expressed frustration over the lack of a wall at our nation’s southern border to keep migrants out. He has, among other things, claimed that illegal immigrants are responsible for bringing cases of leprosy to the United States, helped Trump propagate the “birther” myth that former President Barack Obama is not a citizen of the United States, and was the subject of a yearlong investigation which found that he used undocumented workers to maintain his properties.

Dobbs's frustrations with "border security" come amid reports that a caravan of thousands of refugees is migrating through Central America to the United States. The Trump administration has not settled on a plan of action if the migrants make it to our nation’s southern border. Critics have pointed out that the chances that migrants make it to the U.S. border are low to begin with––they are presently crossing into Mexico and it would take about two more months of travel (if not more) before they even arrive.