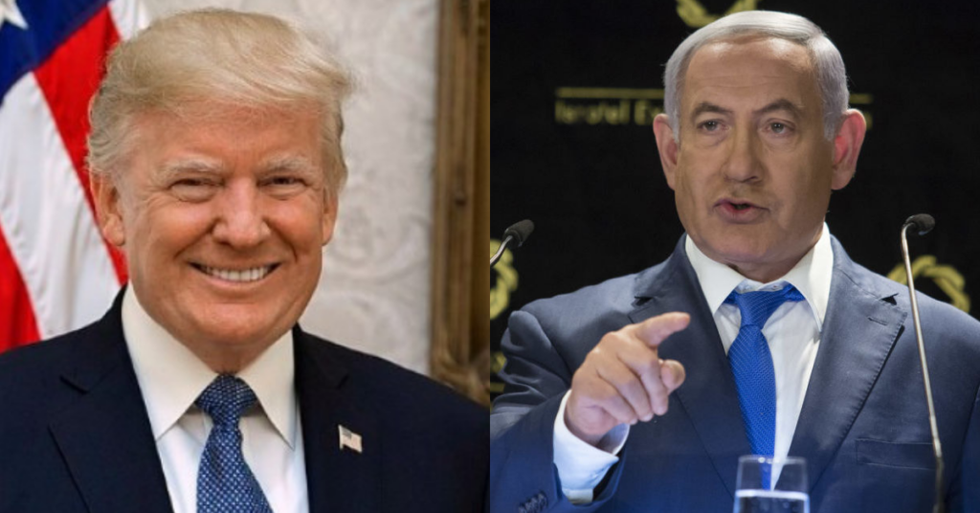 On Sunday, embattled Israeli Prime Minister Benjamin Netanyahu announced a new settlement in Israel named in honor of "a friend of Israel."

He took to Twitter and posted a photo, captioned:

"Establishing a new community in the Golan Heights named after a friend of Israel, US President [Donald Trump]. A historic day!"

Establishing a new community in the Golan Heights named after a friend of Israel, US President @realDonaldTrump. A… https://t.co/QJ3E6CQxSE
— Benjamin Netanyahu (@Benjamin Netanyahu) 1560703920.0

@realDonaldTrump Don’t get too excited. Just like all those buildings that used to have your tainted name on it, th… https://t.co/9DDSGB5ObA
— Andy Ostroy (@Andy Ostroy) 1560739761.0

But not so fast says Senior Diplomatic correspondent based in Tel Aviv, Israel, Barak Ravid. He took to Twitter to refute Netanyahu's claim.

"To my dear friends in the international press: A settlement by the name of 'Trump Heights' or 'Ramat Trump' doesn't exist. It [may] exist in the future but the Israeli cabinet still hasn't even decided to do it. For now there's only a sign. A huge sign. Like Kim Jong Un's envelopes."

People called the move by Netanyahu out as an attempt to manipulate Trump. And declared it successful.

@BarakRavid If Israel wants to have an ally in America after Trump leaves office, this town better never exist.
— Jason Melrath (@Jason Melrath) 1560717472.0

In reality, Netanyahu took the entire Israeli cabinet to the Golan Heights. The current Prime Minister then stated the cabinet would pass a resolution establishing "Ramat Trump."

But what they passed said the government could not make the decision with an election coming in September. What really happened was: