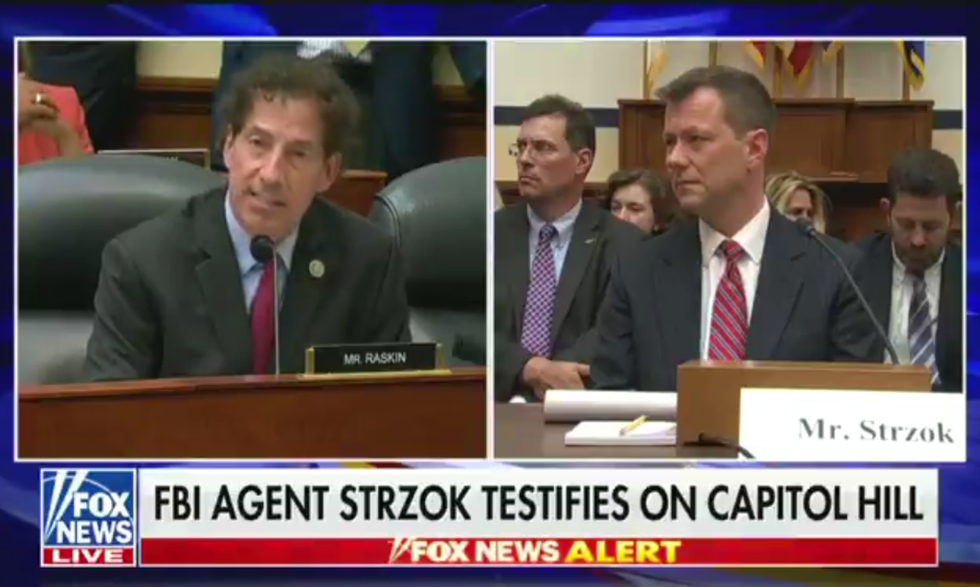 For nearly 10 hours on Thursday, the Judiciary and Oversight Committees of the United States House of Representatives questioned Federal Bureau of Investigation (FBI) agent Peter Strzok. Republicans, and the Trump administration, claimed text messages critical of President Donald Trump that Strzok sent to FBI lawyer Lisa Page were proof positive of an overarching conspiracy against Trump.

But Maryland Democratic Representative Jamie Raskin refused to continue the GOP narrative, pointing out the hypocrisy of Republicans pointing fingers at private text messages from Strzok, critical of Trump, as the proof of a deep state conspiracy. He did so with a list of Republican insults hurled very publicly at the President.

Watch the video below of Raskin asking Strzok if he is also responsible for the GOP insulting Trump.

WATCH Raskin remind everyone that insults toward Donald Trump do not mean deep state conspiracy as he points out ov… https://t.co/7dykFkLbBY
— Amee Vanderpool (@Amee Vanderpool) 1531436310.0

My colleagues have disgraced themselves today."

Earlier, Raskin pointed out that Strzok also had opinions about Democrats, stating,

You can still insult government officials without being thrown into jail or held in contempt of Congress, by our side of the aisle. There's no kings here and we have freedom of speech."

The questioning period frequently devolved into long orations by GOP committee members to plead their case against the FBI and, by extension, the investigation into Russian interference in the 2016 presidential election. The furtherance and legitimization of a popular conspiracy theory dominated the hearing.

Despite clear evidence of ties between Russian interference and the Trump campaign, who admitted to taking meetings with Russian government operatives and lying about it, Strzok's privately expressed opinions taints the investigation.

To that end, Strzok stated in defense of the FBI and the checks and balances of the United States government,

The suggestion that I, in some dark chamber somewhere in the FBI would somehow cast aside all of these procedures, all of these safeguards, and somehow be able to do this, is astounding to me."

It simply couldn't happen. And the proposition that that is going on, that it might occur anywhere in the FBI, deeply corrodes what the FBI is in American society, the effectiveness of their mission, and it is deeply destructive."

Republican committee members appeared at times surprised that FBI agents are allowed to have opinions on politics like all other citizens.

Republican Representative Paul Gosar of Arizona tried to draw parallels between public tweets by Trump and private texts of political opinions by Strzok. Gosar maintained Trump's tweets about Muslims and a Muslim travel ban, used against him in court after the president created a travel ban targeting only primarily Muslim countries, meant Strzok's texts were also fair game.

However, civil service employees in all branches of government, including law enforcement, vote and form opinions on elected officials and political candidates, as well as express them in their private lives and outside of their official capacity.

The Hatch Act prohibits only the use of their official capacity, while acting as a paid civil service employee, to endorse or promote a candidate. Kellyanne Conway, a member of the Trump administration, faced several allegations of Hatch Act violations.

Reactions to Raskin's statements were strongly in favor of Raskin pointing out hypocrisy in the GOP.